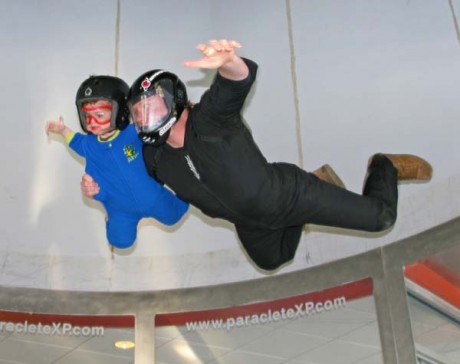 If they were nervous, the men from 1stst Battalion, 321st Airborne, were good at hiding it. They methodically suited up, then lined up next to the wind tunnel's door. As each man took his first flight, the others watched carefully. Despite the instructor's help, a beginner can unknowing lift an arm or leg slightly and blow his balancing act, causing him to tilt, spin or flail about like an airborne clown.

Although none of these paratroopers had ever sky-dived, their static line-jumping experience helped, and all five did fine. After they peeled off their helmets, a couple said they appreciated "not being attached to anything."

The men have just experienced bodyflight in the world's largest vertical wind tunnel, located in laid-back Raeford in Hoke County. Its siren song has lured novelty-seekers, military personnel and skydiving professionals since it opened in late 2007.

It can be a lot of fun, but flying in a vertical wind tunnel is no breeze. Flyers wear earplugs, elbow and knee pads, goggles, helmets, Velcro windsuits, and sneakers, because slip-on shoes can fly off. To enter, you stand inside the tunnel's narrow doorway and fall trustingly forward, where you are swooped up by a very strong vertical column of air. One wrong twist, and you can bounce against the mesh-grid floor or against the walls. But once you get the hang of working with the wind, it can be a real blast.

Late morning, a family from Apex arrive. Mom Stephanie Hughes clicked her camera while husband Todd, the children, and grandmother Maureen enthusiastically suited up. There are plenty of grins, and when Maureen finishes her second flight, loud clapping. 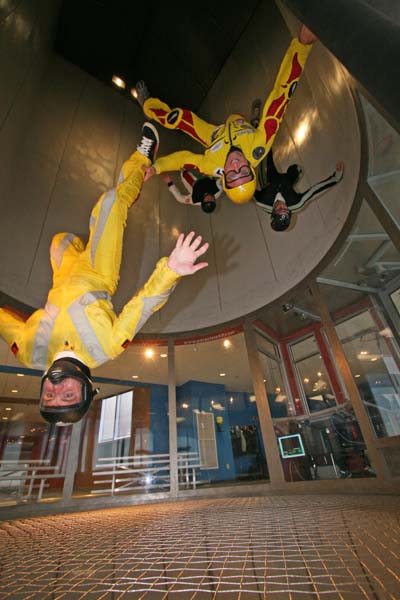 From tunnel rats to pro skydivers

Paraclete XP Sky Venture's three-story facility stands out amid pine forests and cotton fields on a stretch of U.S. Hwy. 401, about 15 miles west of Fayetteville. Inside, its wind tunnel is a cylinder-shaped chamber 16 feet by 4 inches in diameter and 51 feet tall. A recirculating system, aided by four massive 541-horsepower fans and movable aluminum valves, creates a powerful aerodynamic loop capable of wind speeds up to 185 mph. To compare, a Category 5 hurricane—the most forceful there is—carries winds greater than 155 mph.

A "driver" in a control booth adjusts the tunnel's speed according to a flyer's size, expertise and fitness level. Experienced flyers bound around at full speed (185 mph), but first-time adult flyers generally "enter" around 60 percent of full speed (111 mph). Children start at lower speeds that depend on several factors.

For tunnel rats and pro skydivers, Raeford's attraction is "da bomb." They can hone skills and practice freefalls in a fraction of the time and expense it takes up yonder. Skydiving teams eagerly zoom across continents to synchronize four- and eight-way formations here.

Paraclete's instructors, mostly in their 20s and early 30s, are accomplished skydivers. First-time flyers watch a short video and an instructor shows three hand signals to use. If flyers wish to leave the tunnel early they are told to give a thumbs-down signal, twice quickly. They fine-tune their flying positions face down on a padded horizontal trainer. Paraclete offers several flight packages for individuals and groups. A basic flight session costs $54.