Plus Garden To-Do's for February 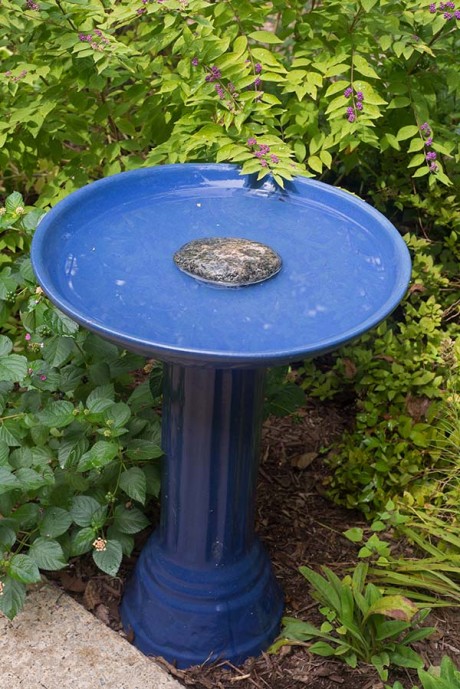 Birdbaths are welcomed additions to any garden because they provide fixed points of visual interest in seasonally changing landscapes, and, of course, because they are desirable watering holes for many feathered friends. And whether you have one or are thinking about adding this hardscape feature to your garden this spring, here are a few pointers for a better birdbath.

While a heavy cement or stone birdbath provides increased stability compared to ones made of lightweight resin or plastic, it is more susceptible to breaking if water constantly freezes and thaws in the bowl during the winter. A good way to prevent ice formation in the bowl, and still provide a reliable refreshment station for birds in the winter, is to set a shallow plastic container in the birdbath during the coldest of times and pour water only into it.

If a cement or stone birdbath does freeze over, the best way to thaw it out is to set a pan of hot water on the ice. Do not pour the heated water onto the ice — it could crack the bowl. And for the same reason, don’t hammer ice out of a birdbath.

A dark colored birdbath in a sunny location will freeze over less often, but it will also be uncomfortably hot in the summer. One solution is to find a site that is shaded by deciduous trees or shrubs during the growing season but is exposed enough through bare branches to the warming sun in the winter.

Because it is bowl shaped, a birdbath usually has a deep section in the middle, and this could be dangerous to fledglings and small birds, so set a flat rock in the center that sticks above the water for a safety perch.

Besides being attracted to it for drinks of water, birds use a birdbath for the obvious — to take baths. With this in mind, consider setting it close to shrubs or short trees with strong limbs so soaked birds will only have short flights to a safe place to preen and dry.

No matter the weather, always keep fresh water in the birdbath by changing it at least once a week. This constant will result in plenty of repeat visits from your winged garden friends.

Not only will birds be seen in your birdbath this winter, but if conditions are just right, you might also witness a phenomenon known as an ice spike. This happens when a shallow container of water, such as a birdbath, quickly freezes. Water freezes from the top down, and since this icing over can be uneven, a small hole on the surface is sometimes left. As the water continues to freeze, it expands, and some could be pushed through the hole, which, in very cold weather, then begins to build a hollow tube of ice that rises up at an angle. Eventually the hole freezes over, completing the ice spike and creating a Kodak moment.