Plus Garden To-Do’s for October 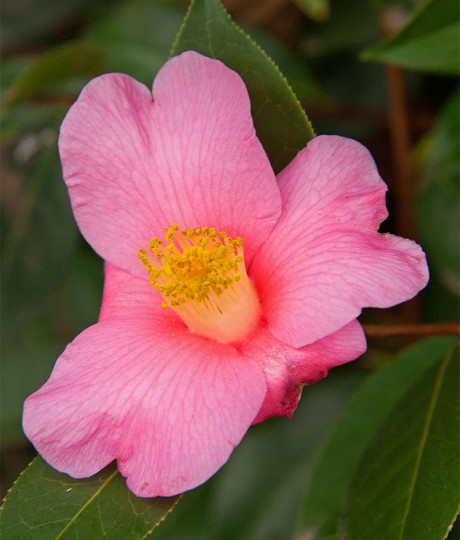 Why wait until spring? Start enjoying the beauty of a blooming camellia (sasanqua) in autumn.

October is the beginning of the camellia blooming season for me, and it will continue until next April. OK, count ‘em on your fingers. That’s right—seven months of camellia flowers.

My enjoyment of such an extended season of blossoms is like a sneaky magic trick: I grow two common camellia species that bloom at different times of the year.

The beauty that starts the parade for me in October is a sasanqua, botanically known as Camellia sasanqua. This native of Japan begins flowering in early autumn and continues to show off until winter arrives in full force at the end of the year.

As cold weather squashes my sasanqua’s displays, it wakes up the other camellias I have, which are japonicas (Camellia japonica — also from Japan). They will shyly open a few blossoms in December, if the winter is mild, but flower production will pick up in mid-to-late January and continue until the bushes bloom themselves out by early April.

Both of these camellias share similarities, especially when it comes to cultivation. First, now is a good time to plant both, and they should be placed in a slightly acidic, well-worked site. Because these pretties are shallow rooted, weekly waterings if the rains don’t come is important to young, developing bushes, especially during their first year in the garden. A three-inch-thick organic mulch will also help retain ground moisture, but keep this natural covering a few inches away from the trunk.

Since their leaves can get scorched by ol’ Sol (both in the summer and winter), planting camellias in a semi-shaded spot, such as under a stand of tall pines, is an ideal setup. The next best location would be in an area shielded from the strongest sunrays in the afternoon.

Camellias will benefit from a generous amount of compost mixed into each planting hole. Using a complete commercial fertilizer such as 8-8-8 or 10-10-10 is inviting problems because they can burn the fine roots that are trying to spread from the plant.

A time-release fertilizer applied in the spring will encourage growth, of course, but camellias really don’t need to be constantly nutrient-pampered. I can’t tell you when the last time was that I used commercial fertilizer on my camellia combo. Instead, I have applied compost as a mulch in mid-March each spring, and they have consistently performed like champs year after year. 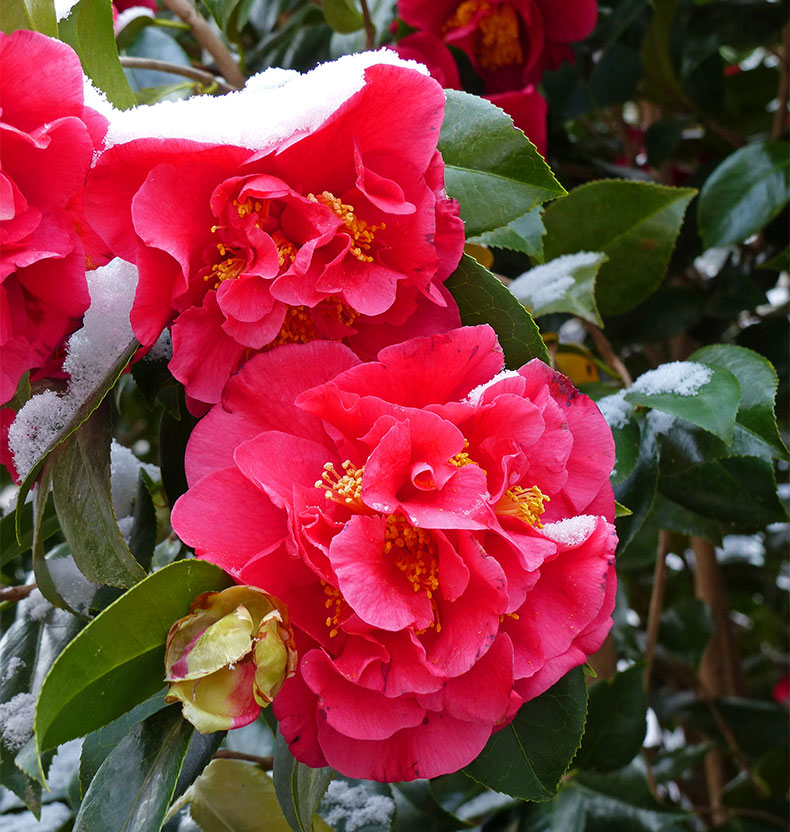 Many camellias are at their northernmost range in our state when it comes to being winter hardy, meaning nasty cold spells can cause problems. This is especially true for gardens in western NC. However, some camellias are more cold-tolerant than others. Finding such varieties can be as easy as asking the friendly staff at your local garden center, but if you want a wide selection, Camellia Forest Nursery (camforest.com) has some of the more extensive offerings of japonicas and sasanquas, as well as other camellia species in the country. Located in Chapel Hill, they are a walk-in shop as well as an e-retailer.