Planting by the moon is no passing phase

Getting in tune with the moon

It’s really quite simple to apply the natural rhythms of the moon and stars to your gardening tasks. Here’s how it works:

The moon’s 28-day journey around the earth, and its gravitational pull gives us ocean tides. Tides are highest at the new moon and the full moon, when sun, earth, and moon are aligned. The passing moon that affects the ocean tides also affects the moisture of the soil during four seven-day phases.

From the new moon to the full moon, the earth’s water table rises, bringing more water to the topsoil. As the full moon decreases to a new moon, pressure on root systems reduces as the water table falls.

At its most basic, an almanac tracks the moon’s phases and its relation to the sun and the stars to suggest the best times for certain activities. For example, gardening chores related to growth, such as grafting, benefit from the flow of rising sap between the new moon and the full moon. Planting during this period means that seeds and plants absorb more water. It also means that fruits harvested and eaten during this time will be at their juiciest.

The time between the full moon and the new moon is the ideal time to prune because decreased pressure causes less bleeding. It’s also the best time to kill weeds and turn soil.

Add the constellations and the fruitful and barren signs to fine-tune your tasks for optimum success. For example, for the greatest benefit from fertilizer and compost, apply between the new moon and the first quarter, when the moon is in fruitful Capricorn, a feminine earth sign. Barren Leo, a masculine fire sign, is the best time to destroy weeds.

Like a cheat-sheet, all almanacs interpret astronomical data for you by task and the most favorable day of the month. Each one presents the information in a different way, but all the information is there along with explanations on reading the symbols.

Almanacs are available at your local hardware or feed and seed store, in bookstores, newsstands, and supermarkets, online and even as a phone app.

My aunt and uncle always kept a dog-eared copy of Blum’s Farmer’s and Planter’s Almanac by the phone book. They often mentioned the moon’s signs in relation to whatever they were planting or harvesting, and turned to the almanac for weather forecasts as much as they relied on the weatherman. 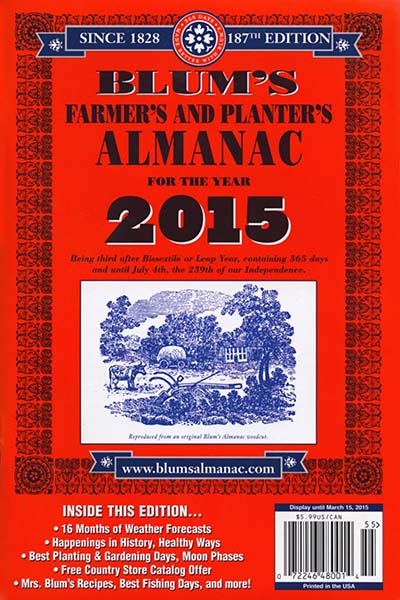 The first Blum’s, 500 copies, was printed on a second-hand press in 1828, and became popular as tobacco farmers brought their golden burley to market each October. In 1926, the Goslen family of Winston-Salem purchased the rights to the familiar red almanac, printing and distributing a quarter of a million copies each year.

The study of the moon and stars to set an earthly course is not new. For thousands of years, people of many cultures and religions have studied the heavens to mark time and to plan and predict long before calendars and computer models.

In this techno-tuned age, a new generation of commercial farmers and backyard green thumbs are tuning in to the moon’s cycles.

“We’ve seen a vast increase in interest in the old-time methods of reading the moon and stars,” said Spruce Pine’s Jack Pyle who, with Taylor Reese, has written two books on the subject: “Raising With the Moon,” and “You and the Man in the Moon.”

Veteran farmer Rob Bowers applies the science of the moon’s phases with the biodynamic calendar of German scientist Maria Thun to time farming tasks at Whitted Bowers Farm in Cedar Grove, north of Hillsborough. Whitted Bowers organic produce can be found at the Carrboro Farmer’s Market and several Triangle restaurants as well as you-pick strawberries and blueberries in season.

“It’s a combination of folk wisdom with an overlap in science,” said Bowers. “I mean, doesn’t everyone know you should never plant in Pisces?”

Michael Perry and Cathy Jones, owners of the 33-acre Perry-Winkle Farm in Chatham County, also consult the almanac to manage production of meat and eggs, cut flowers, potatoes, and seasonal vegetables. “It’s basically a management tool for us,” said Jones. “There’s always something to do, so I check my farming calendar to prioritize. For example, if the moon is more favorable for harvesting sweet potatoes that day, we’ll do that instead of something else.

I’ve never given a lot of thought to timing my farming tasks by astronomical positioning, but I’ll keep an open mind, and the current copy of Blum’s nearby, when it comes to this spring’s garden.

What I know for certain is that anyone who plants a seed or sets a shrub is an optimist who expects a fruitful result. I like to believe that thoughtful attention to natural rhythms will pay off in a generous harvest and brighter blooms. We shall see what summer brings.