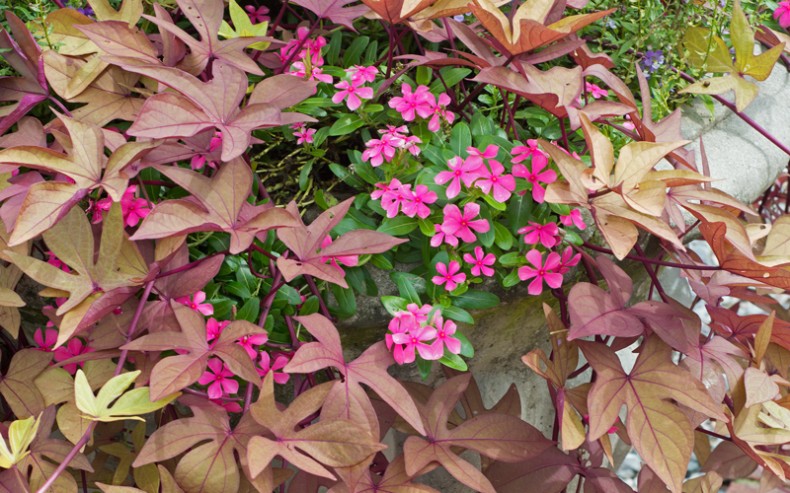 Yummy sweet potatoes, which make some of the best pies for any Southern supper table, can be added to the veggie garden this time of year — but hold on. There is also another sweet potato to plant this month. One that is more a feast for the eyes.

Like its edible cousin, ornamental sweet potato is a sprawling, crawling vine, but with a delightful dose of visual sass.

True to the “ornamental” tag, this sweet potato’s value come from its colorful looks — and there are many. To prove this point, two of the first cultivars to be introduced were eye-candy opposites: “Margarita” is a flashy pleasure bathed in the glow of neon lime-green, while “Blackie” is a dusky, reddish-purple beauty with foliage shaped like oak leaves.

Since the debut of “Margarita” and “Blackie,” the ornamental sweet potato hit parade has only become more diverse. This includes the Sweet Caroline series developed at NC State University that shows off cultivars in shades such as chartreuse, deep purple, rust red and green. And then there’s the popular “Tricolor” cultivar that can’t decide what hue it wants to be, so it settles for white, green and pink (all on the same plant).

Being a vine, ornamental sweet potato can be used as a colorful groundcover or accent spilling over a fence or raised bed wall. This pretty is also a prime candidate to flow out of planters and window boxes.

Ornamental sweet potatoes are drought tolerant and, true to their tropical America's origin, love our summer heat. Placing them in an area that receives around six hours of sun will help keep their colors vibrant, while mulching cuts down on your watering chore. Adding a small dose of time-release fertilizer properly feeds their nutrient needs though the growing season.

Although the tubers can be dug up in the fall and saved for next spring’s garden, my results have been underwhelming, so I just grow ornamental sweet potatoes as annuals, which is common, since they are relatively inexpensive.

But, can you eat the tubers? For typical ornamental sweet potatoes, if you enjoy bland, the answer is yes. However, there is a spanking brand-new series called Treasure Island to look for locally or online that combines colorful leaves with tastier ‘taters, so if you want to double your pleasure, give ‘em a try! 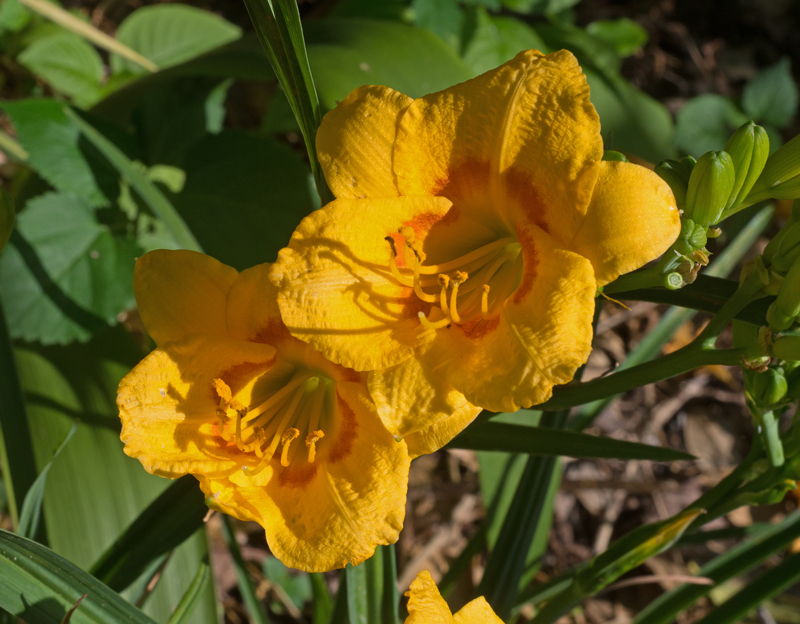 Seeds can form from the faded flowers of such hybrid daylilies as “Howlin’ Moth.”

Daylilies are beginning to flaunt their fabulous blooms displays, but remember to deadhead any flowers that begin to fade. This will prevent seed formation, which takes energy from the plants as they prepare for next year’s flower-fest. So, why not just plant the seeds and have more daylilies? Seeds from hybrid cultivars—the most popular form of daylilies grown today—often produce different offspring compared to their momma plant. If the mad scientist in you just has to know how those daylily seeds would sprout, plant away, but keep in mind it could take a few years for the new daylilies to bloom.