In North Carolina, you can go to jail if you steal pine straw, Venus flytraps, wild ginseng and many other protected wild plants 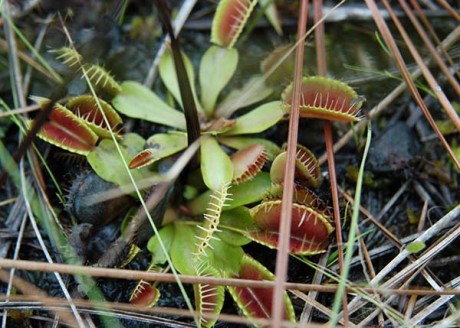 Since December it’s been a felony in North Carolina to steal this rare, carnivorous Venus flytrap plant. (Photo by City of Wilmington)

From ginseng in the mountains to Venus flytraps at the coast, North Carolina nurtures several plant species that thrive in our state’s diverse ecosystem. In fact, the Venus flytrap is one plant that grows almost exclusively within a 70-mile radius of Wilmington.

In case you didn’t know, Venus flytraps are rare, carnivorous plants that feed on insects and grow in bogs on state Wildlife Resources Commission game lands in Pender, Brunswick, Onslow and New Hanover counties. Its numbers are at risk. The North Carolina Chapter of the Nature Conservancy estimates that only 35,000 plants remain in the wild.

Steal a plant, go to jail

Venus flytraps join wild ginseng and pine straw under protection in North Carolina by a Class H felony. In addition, North Carolina and the N.C. Plant Conservation Program lists a surprising number and variety of plant species protected with hefty fines for illegally collecting, selling and receiving endangered plants. While most of us already obey the law, it’s better to play it safe by never taking anything from public land or parks including animals, plants, seeds, trees and herbs.

Venus flytrap poaching has been a problem in North Carolina for decades, but in the last three years, it has become an epidemic. An enhanced plant protection law with stricter penalties aims to protect these endangered, petite plants from thieves who make thousands of dollars stealing this state’s living treasures from wild game lands and selling them to out-of-state distributors.

Typically, the Wildlife Resources Commission makes 10 to 20 arrests a year for Venus flytrap poaching, but the simple misdemeanor penalty has been frustrating for law enforcement officers.

“It’s very hard to catch these guys,” said Sgt. Brandon Dean, of the N.C. Wildlife Enforcement Division. “You can just go ahead and be prepared for a foot chase because they’ll use any possible means to get away.

“We have been fighting a losing battle with this for a long time,” he said. “When we would catch them, they would pretty much laugh in our faces and tell us they were making too much money to stop because the penalty was basically nothing more than court costs.”

A single plant fetches from between $7 and $10 in a store, but the price quadruples on the black market, where the plants are ground for their supposed medicinal benefits.

Over Memorial Day weekend in 2013, poachers actually made away with more than 1,000 plants from the Stanley Rehder Carnivorous Plant Garden in Wilmington. That was enough for state Rep. Ted Davis of the 19th District, who sponsored legislation to elevate the penalty for removing Venus flytraps from the wild. As of Dec. 1, 2014, poaching these endangered plants is a Class H felony, not just a misdemeanor.

“I was born and raised in Wilmington, so I grew up knowing about the Venus flytrap and how unique it is,” said Rep. Davis, who understood that a stricter penalty would be crucial to the plant’s survival.

Barely a month after state representatives passed stricter penalties, wildlife officer Fred Gorchess and Pender County sheriff’s deputies apprehended four men at the Holly Shelter Game Land with 970 stolen Venus flytraps in their possession. Because each plant taken is considered an individual offense, the suspects face up to 29 months in prison and fines if convicted.

You can help
You can assist wildlife officers in preventing conservation crimes by reporting suspicious activities and violations to the Wildlife Commission at (800) 662-7137.