The public can ride New Hope Valley Railway on the first Sunday of each month, starting in April 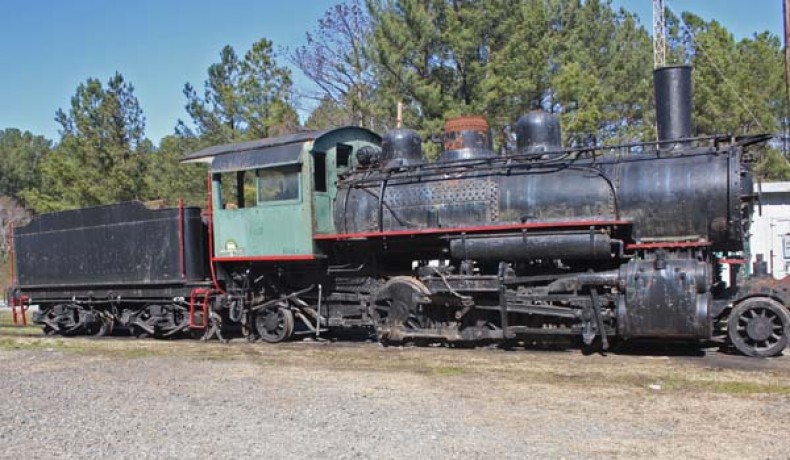 New Hope Valley Railway recently acquired the “Cliffside Railroad 110” steam locomotive, once in use in Rutherford County, and plans to restore it for rides. Meanwhile, the railway’s public rides begin this month.

The engine — numbered 110 and affectionately called "Old Puffer" by the train crews who ran it down the three-mile Cliffside Railway — served the town of Cliffside, N.C., located 47 miles west of Charlotte. From its beginnings in the early 1900s, it hauled supplies for town residents from nearby junctions, sent finished products to connecting railways and brought in raw materials to Cliffside Mills, the South's largest gingham textile plant. The train carried passengers in and out of Cliffside and even picked up school children on their way back to the schoolhouse during its mid-day run into Cliffside.

The most famous passengers on the Cliffside 110 were a family of chickens who took its first ride in the early 1930s just as the train was nearing Cliffside Junction. One of the engineers spotted a hen and three chicks on the tracks, stopped the train and loaded them on board. The family of chickens must have enjoyed that first ride because for years after when the whistle sounded they would scurry up to the train to board and then hop back off to scratch and peck around the yards as the train stopped or pulled into the shop between runs.

As automobiles became a more popular mode of transportation for passengers, the Cliffside 110 continued to carry freight until it was retired and replaced by a more modern diesel engine in 1962.

"As New Hope Valley Railway celebrates our 30th anniversary," said NHVR president Mike MacLean, "it's only fitting to bring a steam engine with such rich North Carolina history back to its original glory".

The railway is located in historic Bonsal, 10 minutes south of Apex off of U.S. Highway 1 at Exit 89. Trains generally operate one Sunday each month, beginning in the spring through the end of the year. There are also special Halloween and Santa trains as well as themed events, charter and group train rides, opportunities to operate a locomotive and birthday parties in an historic caboose. The North Carolina Railway Museum, a collection of antique train cars and an elaborate G Scale model garden railroad, is also part of the NHVR grounds along with a gift shop. Visit www.TriangleTrain.com.

A dedicated team of NHVR volunteers has been restoring and running trains since 1983. Their knowledge and expertise will help put the Cliffside 110 back on the tracks chugging among the North Carolina pines once again, MacLean said.

The NHVR shares a similar history to that of Cliffside's. Both railways were organized in the early 1900s and their short tracks were used to carry materials and some passenger cars from North Carolina mills to connecting rail lines. While the Cliffside freight cars were hauling textiles, the NHVR's were running timber along with other supplies like cotton, corn, beans and tobacco.

NHVR will restore the historic steam engine so it can operate on the 4-mile main line used by the railway for public ride days, generally held the first Sunday of each month beginning in April and running through the end of the year. The restoration effort will take five to seven years and cost an estimated $350,000 to $600,000, which will be funded exclusively through the generosity of members and donors.

Donations can be made on the NHVR website at www.TriangleTrain.com. View photos at www.Facebook.com/TriangleTrain.