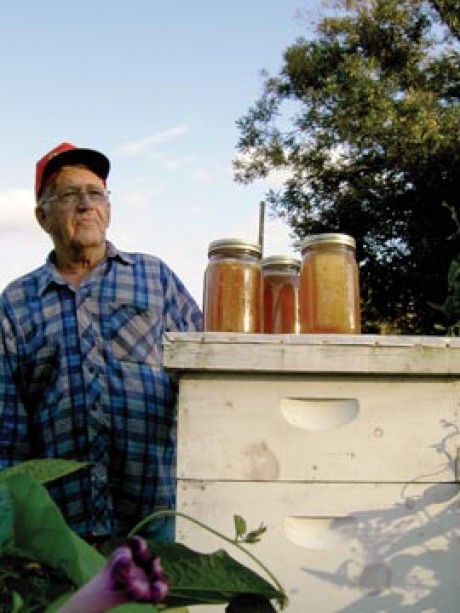 Thanks to North Carolina beekeepers, finding local honey is now an easier process. Honey is available at any grocery store.

"Some of the honey sold in North Carolina is not all honey," says Chuck Norton of Norton's Nut & Honey Farm in Rockingham County. "Some stores buy honey from China or Argentina and sell it as wildflower or sourwood honey, and sourwood honey is not produced outside the southeastern United States." So when you buy honey, read the label. You might be surprised to see the words China or Argentina in fine print.

How to tell one kind from another

When you purchase local honey from a beekeeper, Patterson suggests holding the honey in front of a light source. Larry Thompson and Union Power Cooperative member Jeff Knight manage Old North State Apiaries in Stanly County and Union County. "The honey should be clear, free of wax particulates, and any other foreign material such as lint or trash," says Thompson.

Thompson also suggests tasting the honey, because honey can ferment when moisture enters the honey from improper storage. Fermented honey will look normal but will release an odor from the conversion to alcohol. However, "The shelf life is indefinite if it is not allowed to ferment," says Thompson. "In fact, honey that has been found in Egyptian pyramids apparently has very similar qualities to the honey that is produced today."

Thompson recommends looking at the packaging, too, for the producer's name and the product's identity. "If the container is not properly labeled or if the package is not neat and clean, I would look for another honey source," he says.

North Carolina's local honey varieties are as diverse as our state's foliage, and knowing how to select the right honey will have delectable results. The color and flavor of local honey is determined by the nectar source and weather in each region of North Carolina.

Ranging from light to dark amber, honey comes in many different shades. According to Patterson, the lighter honey is milder. The darker honey has a more distinct bolder taste. Thompson adds, "Research has shown that darker honeys contain higher levels of natural antioxidants, which may be of interest to those who are trying to locate the healthiest honey for consumption."

In addition, Thompson's and Knight's bees pollinate cotton fields in Union County. "We get a water-white cotton honey that makes an excellent creamed honey," Thompson adds.

Creamed honey has the consistency of a honey spread and is great for spreading on bagels or toast. Thompson and Knight's creamed honey begins with starter seed — honey that is processed so that the glucose crystals break down into an extremely fine state. "Once the honey and starter seed is thoroughly mixed, it usually sets up firmly within four to six days and you have creamed honey," says Thompson.

Which kind of honey tastes best?

Where to buy honey

Thompson adds that most people favor the variety of honey that was available in their homes as children. He adds, "They have fond memories of family trips to the mountains each summer where they purchased sourwood honey from a roadside stand and they just have to have sourwood honey."

When Norton refers to sourwood honey, he says, "That's the honey that makes a hot slice of yellow cornbread with a little butter truly unforgettable."

Norton also explains that North Carolina honey will vary in color and taste from year to year because of the weather. "Our spring wildflower is very fruity and light this year as the tulip poplar froze in the bud due to a series of late frosts and from cloudy rainy cool days during the bloom."

When Norton takes his honey to festivals, he offers samples of his fall wildflower, spring wildflower, and sourwood honeys. Most people prefer sourwood honey, but they agree that all of the honey is good honey.

Thompson concludes, "Every honey varietal has a different color and taste and it really is a personal preference as to which is the best."

Of course, the best part of honey is eating it. Patterson enjoys baked sweet potatoes drizzled with honey and loves apples cooked with honey. The best, he claims, is pecan pie made with honey. Honey will work instead of sugar in any recipe. "The basic rule of thumb is 3/4 cups of honey for every cup of sugar," says Patterson.

The next time you are at a county fair, festival or farmers market stop by a beekeeper's tent and pick up a jar of a delicious honey. Think of the possibilities: honey cookies, chocolate milk and honey, honey barbeque sauce, cornbread smothered with honey, honey cupcakes, honey muffins, honey-covered pancakes or waffles, honey icing, and honey banana-nut bread.

Preheat the oven to 325 degrees. Cream the honey and softened butter together. Then add vanilla flavoring and flour. Fold in cranberries and pecans. Drop the sticky batter by spoonfuls onto a baking sheet. Bake the cookies at 325 degrees for 12 minutes or until the cookies are golden brown.

Source: The National Honey Board – www.nhb.org