It’s rare, but it’s there on our shores 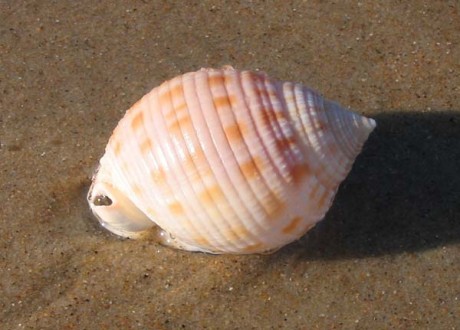 I found this one on the beach after a storm. Remember: Don’t take live shells; toss them back.

There’s one aggressive shell that lives off our coast you would certainly fear if he was your undersea neighbor. His name is the Scotch Bonnet, and he packs quite a punch! This snail-like creature weighs in at just a few ounces and averages only 2 to 4 inches in length. But don’t let his small size fool you. This contender enjoys living in depths up to 300 feet and actually prefers the swift currents of our coastal waters.

If all this talk about his feisty reputation has you trembling, wait: It gets worse. Like something from an old black-and-white horror movie, this dastardly gastropod uses sulfuric acid to dissolve the shells of his prey as he slowly devours them. Sand dollars and sea urchins are among his favorite victims. Perhaps it’s time to say something nice about our North Carolina state seashell.

In 1965, state Rep. Moncie Daniels, from Dare County, introduced legislation to name the Scotch Bonnet as the official seashell of North Carolina. Living up to his reputation, the shell had to fight his way into this part of our state’s history. Because it’s so hard to find, many people felt the shell was too rare to justify such distinction. But after a small battle, the Scotch Bonnet won out again. North Carolina was actually the very first U.S. state to adopt a seashell as a state symbol.

The Scotch Bonnet has always been prized for its beautiful color and exotic shape. It was first recognized in 1778 by an Austrian, Ignaz von Born. Many other reputable folks studied the shell throughout the years. They said the shell’s shape resembles the Tam o’Shanter, a brimless bonnet cap worn by the early Scottish. The plaid patchwork of stripes that adorns a freshly found Scotch Bonnet would also have found its way into the name. One thing is definite: Scottish descendants and settlers were a dominant population in colonial North Carolina. What better tribute could a noble clan of people hope for than having their name associated with a perfect shell?

Though we have given the Scotch Bonnet a gracious seat, there are a few predators he must fear. The mighty stone crab that lives well off our coast has crushing claws that are no match for the Scotch Bonnet. Blue crabs are also a threat, though the thick outer lip of the Bonnet’s shell does provide protection. Another foe is the ocean itself. Massive winter storms sometimes send Scotch Bonnets to the beach by the hundreds where gulls pick at them with vengeance.

Although the shell lives in our coastal waters all the way to Brazil — and are welcomed as a delicacy in some countries — you should consider yourself lucky to find a perfect Scotch Bonnet. They are a rare visitor to our coast unless a winter storm delivers them to the shore. If you do find one, be sure to examine thoroughly the interior. There’s another sea creature that uses a vacant Scotch Bonnet’s shell as his home. It’s the hermit crab. He too has a wonderful story worthy of being told. Go ahead and toss him back, but keep your eyes open. There’s a Scotch Bonnet in your future if you’re walking the magnificent beaches of North Carolina.

A resident of Buxton and member of Cape Hatteras Electric Cooperative, Kevin McCabe fishes and combs the beaches on a regular basis. In winter, he writes.