A Taste of the Pirate's Life 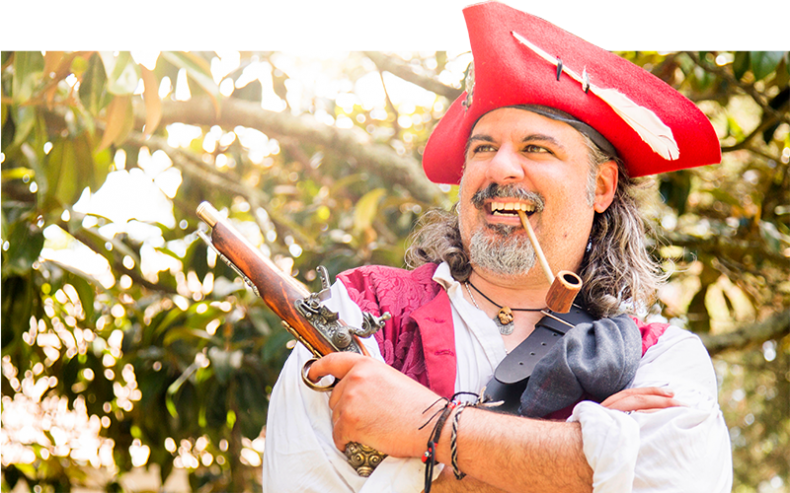 As the son of a commercial fisherman, Beaufort native Carl Cannon, Jr., came by his love of the sea honestly — though some people would say he took a wrong turn along the way. As an adult, Cannon chose a life of pirating. He’s commander of a rowdy band of swashbucklers, mermaids and sailors landing at Gallant’s Channel September 23–25 for this year’s Beaufort Pirate Invasion.

“Pirates have gotten a bad rep, but it really depends which side you’re on,” says Carl, who spends his days organizing pirate invasions and volunteering at the Maritime Museum in this seaside town, which is nestled between the outlying Shackleford and Bogue banks.

“Over history pirates are typically robbers and thieves,” Carl adds, then slipping into character: “We are privateers, hired by kings and the wealthy to protect their property from their enemies, and sometimes it’s necessary to appropriate their cargo. We’re the good guys.”

Pirate activity in and around Beaufort harks back to the Golden Age of Piracy, when the infamous Blackbeard ran the Queen Anne’s Revenge aground in Beaufort Inlet in 1718, and in 1747 when Spanish privateers attacked and plundered the small town until local militia finally drove the attackers away.

It was that bit of tumultuous history that inspired the first event in 1960: a reenactment of the invasion performed by the local fire department.

“When I was just a kid, my mom would take me to the original Pirate Invasions, which started here in the early 1960s,” Carl says. “I can remember waiting on the docks for my dad to come home between fishing trips, and when I was pretty young, I was given my first rowboat. So between those early days and our family’s history with the sea, I guess I always dreamed about that kind of life.” 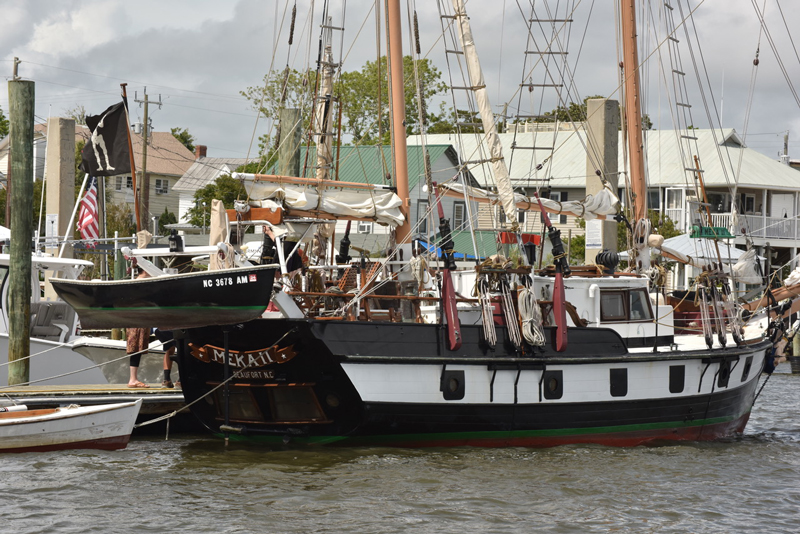 Invasions through the years

Those early Pirate Invasion events of the ’60s were two-hour performances featuring pirate antics and a bit of history, but after several years, interest waned. America’s Bicentennial and the tall ship cruises revitalized it.

“Around that time, well-known pirate Captain Horatio Sinbad joined in the fun for several years, and he and his ship ‘Meka II’ brought a new aspect to the event for a time,” Carl says. “Then we underwent another revival in the 1980s. The pandemic slowed us down, but all in all, we’ve done 48 events since the early 1960s.”

Before Carl took up the pirate life, he was a commercial fisherman and worked on a dredge boat. By 2012, he had purchased and outfitted a sailboat into an 18th-century replica of a pirate ship and began pirating. In 2017, he took over volunteer leadership as president of the Beaufort Pirate Invasion. The festival became a non-profit in 2015 so that it could raise money for charity — last year, the group funded a violin and a cello for the classical music program at East Carteret County High School.

In May, Carl’s crew descended on Swansboro in Onslow County for its two-day Pirate Fest.

“There were boats, encampments, cannon firings, sword fights and even a pirate scavenger hunt,” says LaQuesha Cadwallader, recreation program supervisor with Onslow Parks and Recreation, which presented the event with Swansboro Parks and Recreation. “People just really like pirates.”

Event attendees got into the action. “Many of the adults and kids came dressed up like pirates,” Director of Swansboro Parks and Recreation Anna Stanley says. “And the invasion on the water with the battle between the ships is amazing. It’s one of my favorite annual events here.”

In September, Carl and his pirate crew of nearly 40 will sail into Gallants Channel and set up their encampment on its shores, living the pirate life throughout the three-day festival. Battles between pirate ships, living history displays and reenactments, sword fights, mermaids, lady pirates and black-powder demonstrations bring the past alive.

“It’s our mission to keep the tradition alive with our pirate invasion events up and down the Atlantic Coast, showcasing the fun and history of this oft-maligned lifestyle,” he says. “Once you get to know us, you’ll find that our pirate crews are a friendly bunch who only pick up a sword when necessary, fire our cannons to demonstrate our might — and are a lot more bark than bite.”