When Jerry Read Smith was a student at Warren Wilson College in 1974, he was struck by a bolt of musical lightning.

“I was walking across campus when I heard this music, and there was something in it I’d never heard before. It was [folk musician] John McCutcheon, playing hammered dulcimer in a concert, and I went in there and sat behind him and watched him play for a couple of hours. Then I thought, I have to get one of these things,” Jerry remembers.

Jerry had played guitar growing up but hadn’t encountered a hammered dulcimer until that night. He ordered plans from the Smithsonian and, despite having little woodworking experience, built one in his dorm room. 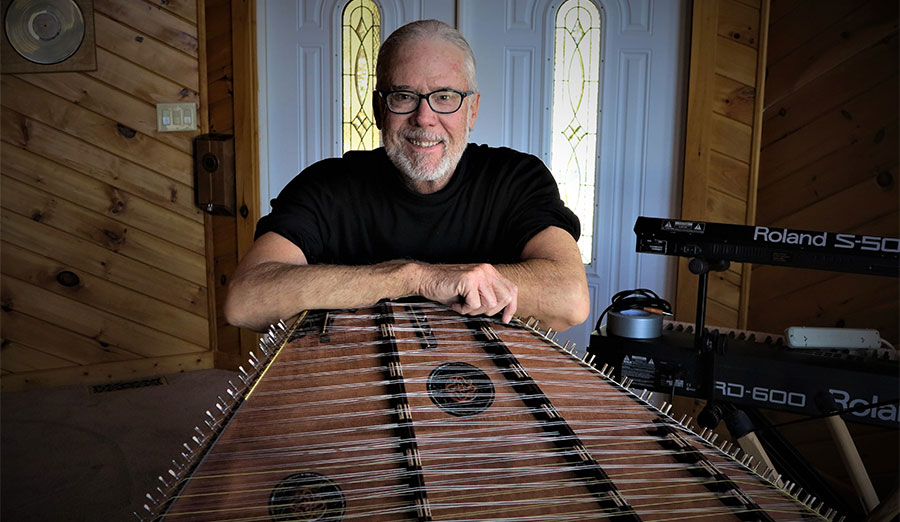 “When I got done with it, everybody gathered around, and I couldn’t play well, but they treated me like I was one of the Beatles,” he says. “After I played it a couple of months, I thought I could build a better one of these. That Christmas I was home in Hudson, Ohio, and started working in my dad’s basement.”

More than 40 years later, Jerry is one of the nation’s top hammered dulcimer makers, with a waiting list for his instruments — which look as beautiful as they sound.

Hammered dulcimers have a centuries-long history, although they’re less familiar than three- or four-stringed mountain dulcimers. The trapezoid-shaped hammered dulcimer has up to 100 metal strings, which the musician strikes with lightweight wooden hammers to create a sweet, ringing sound. It’s popular in traditional folk music, but Jerry says it has even popped up in songs by The Doors and John Lennon.

"There is something about the sound of it, that you strike the strings and the sound goes out into space. Nothing interrupts the tone, as when moving your finger on a guitar or violin."

“There is something about the sound of it, that you strike the strings and the sound goes out into space. Nothing interrupts the tone, as when moving your finger on a guitar or violin,” Jerry says.

He dropped out of Warren Wilson in his senior year and started building hammered dulcimers, selling the sixth one to his former academic advisor. Now he’s up to number 1,013.

Jerry looks at types of wood, kinds of metal for the strings, and composition of the soundboards, seeking the construction that will offer the best combination of rich low tones and bright higher ones. Vertical bridges, which support the strings but are not glued down, are usually made from Bolivian rosewood. Elaborately carved sound holes are attractive and functional.

Getting his first apprentice about five years ago freed him up to dig more deeply into design for the instruments, which are made in a workshop at his West Asheville home. He makes four-and-a-half-octave instruments with 88 strings, and five-octave ones that have 100 strings. That’s lot of strings to tune, which requires a special wrench to adjust the metal pegs holding them.

“Before people buy one, this is my advice: You will spend equal amounts of time playing and tuning. That can freak people out who don’t want to spend all their time tuning,” Jerry says.

But the sound those strings make is worth it.

“Even if you play just one note at a time, people will stop and listen,” Jerry says. “You don’t have to be a famous musician or anybody else, you can be yourself, and people might enjoy listening to you as much as them, and that’s cool.”

Debbie Moose (debbiemoose.com) has authored seven cookbooks and is a former food editor for The News & Observer in Raleigh.