Crunch Time at the Demolition Derby

Derbies keep bringing spectators – and drivers – back for more

Get behind the wheel at the NC State Fair for a bird’s eye view of this action-packed hobby. 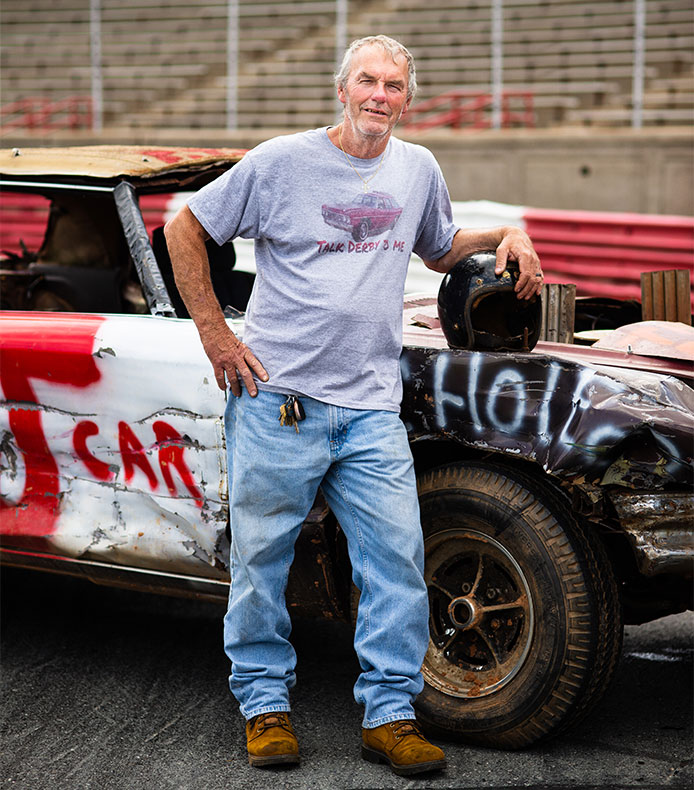 Ricky Kimmel says the most he’s ever put into a car is $1,500. “I drug one out of the field just the other day to start working on it.”

The appeal of demolition derbies for racers is likely what inspired Ricky Kimmel to “probably a coupla hundred” victories over the past 40 years. “You can run into somebody and not get in trouble for it,” says the racer from Stanleyville, an unincorporated community in Forsyth County.

The same primal pull is probably true for spectators who pack grandstands across North Carolina. From the mountains to the coast, watching cars being pounded to smithereens is a strong drawing card. The action is most prevalent in the fall, which coincides with dozens of county carnivals, as well as the North Carolina State Fair.

“When they drop the green flag, it’s hammer down,” says Jimmy Brown, a demo derby veteran from Clemmons. “If you ain’t ever drove one, it’s the biggest rush a man will ever get.”

There’s nothing very complicated about a demo-derby car. It often starts out as a high-mileage vehicle dragged out of a junkyard or purchased from a dealer who knows it won’t sell. They come in all shapes and sizes, from four- to eight-cylinder entries, to mini-vans and SUVs. Some competitors prefer big, durable junkers known as “old iron” — pre-1980s Cadillacs, Oldsmobiles, etc. — to the Detroit offerings that replaced them, or “80s-up” cars.

What does it take to convert a street-legal machine into a car that’ll withstand a lickin’ and keep on tickin’? It depends on how much a competitor is willing to spend on something he or she is going to tear up. Ricky says the most he’s ever put into a car is $1,500.

All the glass is removed, as are the interior components (save the driver’s seat, obviously) and dashboard. Ricky prefers to install new timing chains, distributor caps, rotor buttons and spark-plug wires to ensure performance come showtime.

He and Jimmy Brown, both of whom are derby regulars at Bowman Gray Stadium in Winston-Salem, say they can have a car ready in just one week’s time.

“I drug one out of the field just the other day to start working on it,” says Ricky, whose daughters Kayla and Kelsey have also participated in derby action. 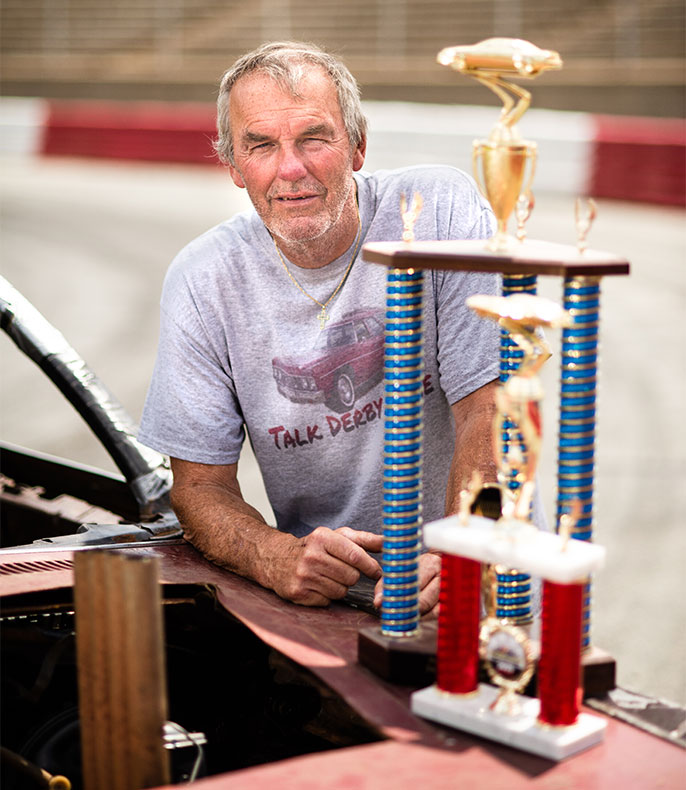 Ricky won these trophies 19 years apart. The smaller one came from a demolition derby held at the end of May in which he took first place. Ricky often gives his trophies away to kids watching in the stands.

In many cases, the prize money is paltry enough that it discourages significant auto upgrades by the entrants. But the rules differ depending on the promoter who has booked the show, and as is usually the case, the more money that’s at stake, the more racers are willing to spend — and tempted to stretch the rules. A hefty winner’s purse in the Carolinas can go as high as $5,000, according to Billy Monroe, the co-owner of Carolina Derby Promotions.

“You can take anything and do halfway decent,” said Lumberton’s Larry Allen, a member of Lumbee River EMC. Larry is a retired derby competitor who, with a dedicated group of friends, helped boost the count at his hometown county fair from four cars to 44. “You just need a smart head. Just go have fun and try not to kill somebody.”

A strong local contingent is key to making a show a success because friends and family are an incentive for the competitors, Billy explains, whose outfit is based in Cleveland County. Those folks, of course, are the ones buying tickets that help fund the purse.

“I think just being in front of everybody is a kick for these guys,” Billy says. His group holds events in Shelby; Gastonia; Statesville; Lancaster, South Carolina; Wytheville, Virginia; and other small towns. “It’s drawn big crowds in Shelby since the mid-80s. It’s one of those things that everybody’s just enjoyed going to year after year.”

“The biggest thing is to have a set of rules and go by them,” he continues. “If it’s wrong, it’s wrong, and you’ve got to make them fix it or not let them run.” 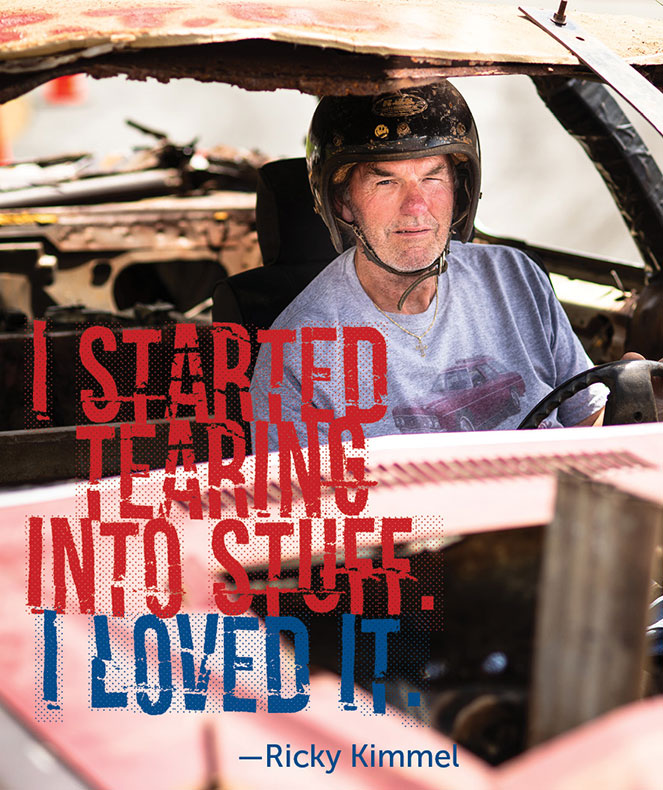 Demolition derbies were virtually non-existent in 2020 due to the COVID-19 pandemic’s effect on large public gatherings. That was only the second year the 58-year-old Ricky hasn’t raced; the other, 2009 when he underwent chemotherapy and surgery because of cancer.

“They took out 12 to 14 inches of my colon,” Ricky said. “I like to tell people I relate it to racing: They took out two curves and a straightaway.”

When Ricky made his derby debut at age 16, he was so nervous that he couldn’t steady himself to climb in the car. People “had to pick me up and put me in the window so I could slide in,” he remembers.

“I had chickened out three or four times before that, and my dad would end up driving the car I’d built. Finally, he’s like: ‘I’m not doing it anymore. If you don’t run tonight, it’ll just sit here in the pits.’ As soon as the green flag dropped, all the nervousness went away and I started tearing into stuff. I loved it.”

Get in on the action

Many demolition derbies were canceled or postponed during the peak of the pandemic, but venues are getting events on the calendar once more. Here are a few upcoming demolition derbies around the state. Check with each venue to confirm dates and times.

Thomas Pope is former sports editor for The Fayetteville Observer, where he received several awards over more than 40 years covering motorsports. He is co-author of three NASCAR-related books and is currently a senior editor for Speedway Illustrated magazine.