Western NC offers epic biking options, both on- and off-road

By Tina Firesheets | Photos by Perfecta Visuals (unless otherwise indicated) 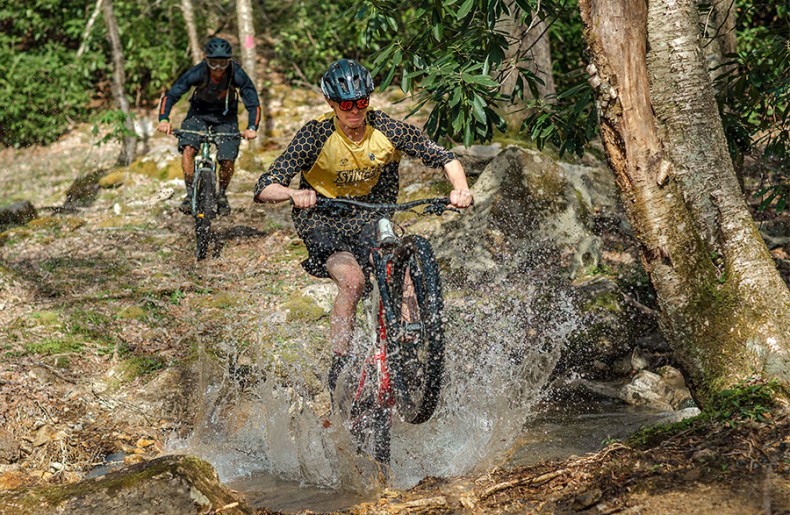 Jacob Tarbay splashes through a creek crossing on Grassy Gap. (See "The High Country" below.)

There’s nothing like hopping on a bike in the summertime, pedaling fast and feeling the wind against your face. It almost makes you feel like a carefree kid again.
Whether you’re a casual weekend pedal pusher or a fierce trailblazer, North Carolina has the terrain to match both your skill level and your ambition. And with its epic vistas, relatively moderate climate and high elevation, Western NC draws cyclists from across the country. Here are a few cycling destinations for riders of any ability. 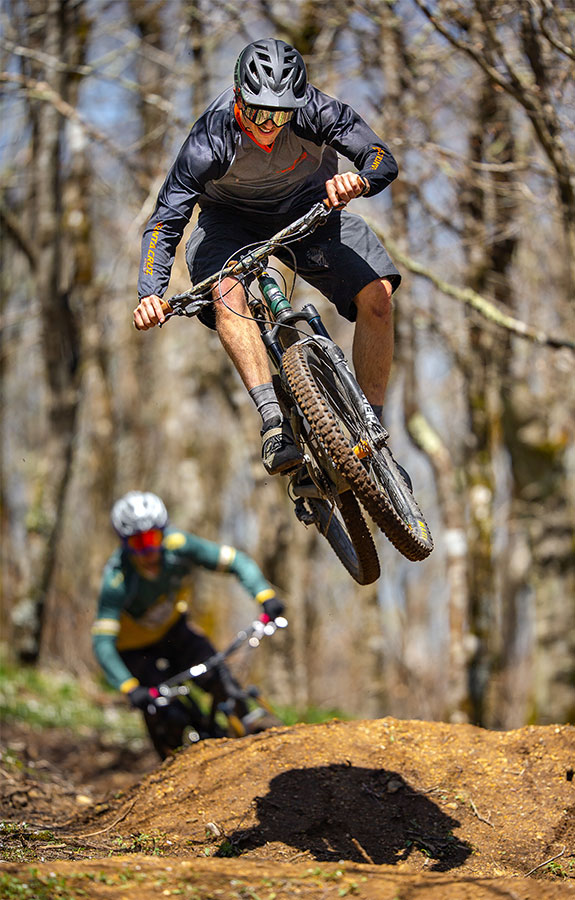 Mountain biker Patrick O’Neal takes a jump on Witches Backbone, part of the Emerald Outback trail network, in the town of Beech Mountain. (See "The High Country" below.)

A flat bike route in the mountains? Absolutely.

Kelly started her business as a fly fishing operation. But once there, customers wanted to explore other activities such as canoeing, tubing and biking. She says the bike road is the flattest to be found in the High Country.

“It’s a leisure bike road. You can pretend you’re the old train riding down the road because you’d be going about the speed of the train that used to run, and you follow the river the whole way,” Kelly says.

She says riders can see up to a dozen species of birds, including great blue herons, ospreys and a bald eagle. Beavers, muskrats and otters work and play in the river.

“Bicycles allow you to slow down,” Kelly says. “Unlike in a car, when you’re on a bicycle you can even see ladybugs crossing the road.” 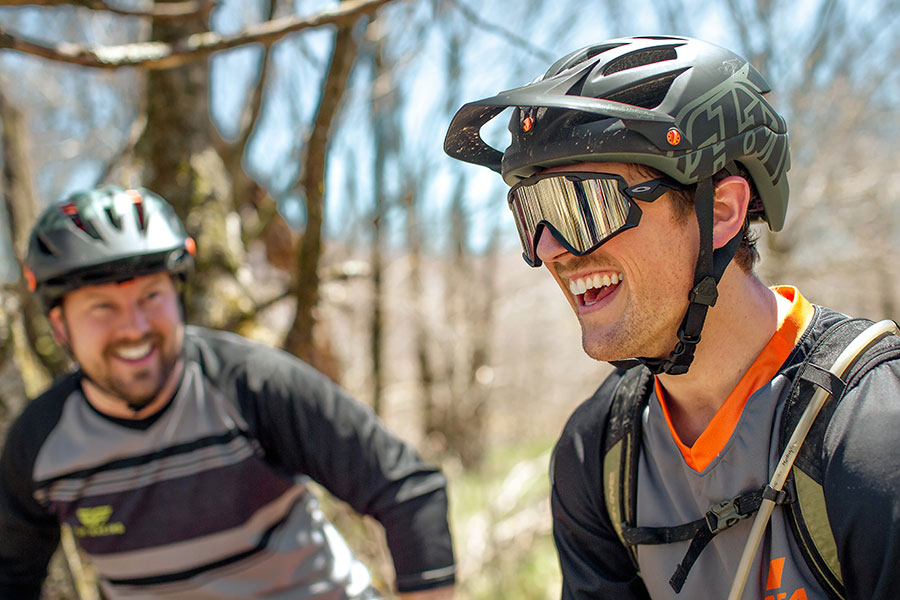 If you’re looking for legendary trails with the reputation of being among the best in the Southeast, head to the Tsali (pronounced “SAH-lee”) Recreation Area in Nantahala National Forest.

Chris Royce and his business partner, Brad Gerard, each have about 25 years of mountain biking experience under their belts. Their shop, Tsali Cycles in Bryson City (828-488-9010 or tsalicycles.com), has been in operation five years. Chris says riders from all over the East Coast travel to this small mountain town just to ride the Tsali trail loops.

“The trails are geared more toward intermediate-level riders, but anyone from beginners to advanced riders love the Tsali trails,” he says. “Cycling in this area has a lot of diversity that allows for every skill level. The trail options continue to grow every year, which brings more people to the area.”

The trails comprise more than 40 miles of hilly paths divided into four loops, with varying degrees of difficulty. For a challenge, look for Right Loop, which offers lots of hills and a few creek crossings. The more moderate Thompson Loop offers fewer obstacles, but is still quite hilly.

Chris says spring and fall are the best times to ride the Tsali trails.

“The weather is great and the scenery is amazing at those times of year,” he says. 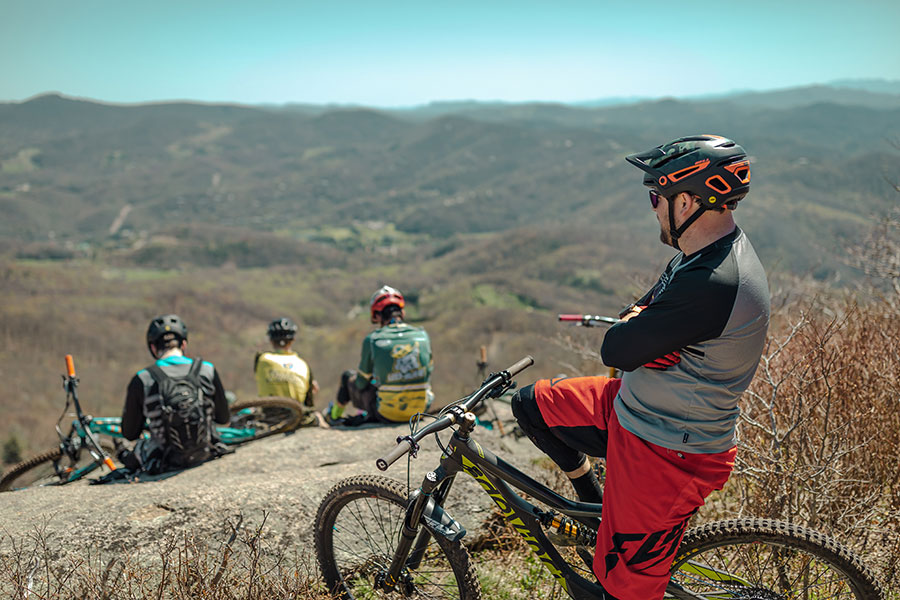 Sean Royall pauses with other riders to take in the view on Southern Ridge, part of the Emerald Outback trail network.

Sean Royall got into cycling when he moved to the Banner Elk-Beech Mountain area, known as the High Country.

The Beech Mountain Parks and Recreation Director has been mountain biking for 19 years now. He says the region — which includes Banner Elk, Beech Mountain and Boone — has a growing bicycling scene. Each town has something different to offer, he says.

Lees-McRae College has a well‑established cycling team, and their home trails are challenging. Sean describes Beech Mountain as an outdoor enthusiast’s kind of town.

“Our biking options have been growing more over the last five years,” he says.

The ski resort there offers downhill biking in the summer, and the town operates and manages several trails on the mountain, including those known as the Emerald Outback (See map (PDF).).

The trail system is a 7-mile park that operates year-round. With an elevation of 4,700 to 5,400 feet, it’s the highest mountain biking trail system on the East Coast. In 2013 and 2014, USA Cycling hosted its collegiate national championships at the Emerald Outback.

Sean says weekend warriors can ride the High Country trails, but lends this advice: “It is real mountain biking, not a greenway, so being prepared with the proper gear and bike is essential.”

For more of a challenge, Sean cites Rocky Knob in Boone, Emerald Outback and several trails in Pisgah National Forest. To train for those rides, he says one just needs to ride more.

Regardless of whether you are a novice or experienced cyclist, Sean says the most important thing is to have fun.

“The main thing is to enjoy being on your bike,” he says. “Don’t let the difficult terrain get you down. If you can’t ride something, just make it a goal to complete it and keep having fun. Biking is a great community to be a part of.” 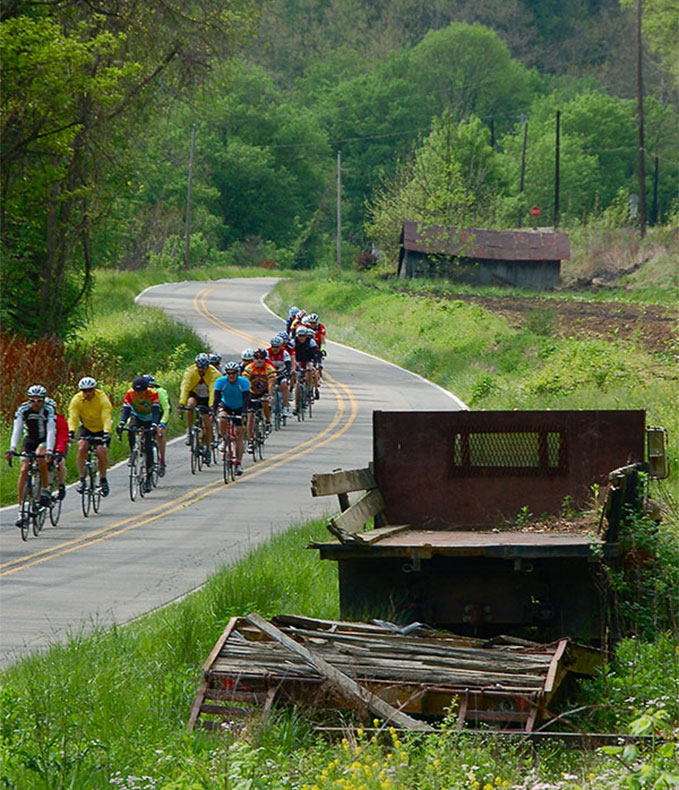 The 21st annual Mountains to Coast Ride, September 28 to October 5, is a fully supported cross-state ride that begins in Blowing Rock and ends on the boardwalk of Atlantic Beach. Cycle North Carolina sponsors this and annual coastal and mountain region rides (the 2019 Mountain Ride is in Brevard, Aug. 3–4). Find more information, including registration details, at ncsports.org.

The Yancey County Chamber of Commerce has organized the annual Burnsville Metric ride each April for the past 25 years. The fully supported metric century (100 km) is a leisurely ride — not a race — to kick off the cycling season. Learn more at yanceychamber.com.