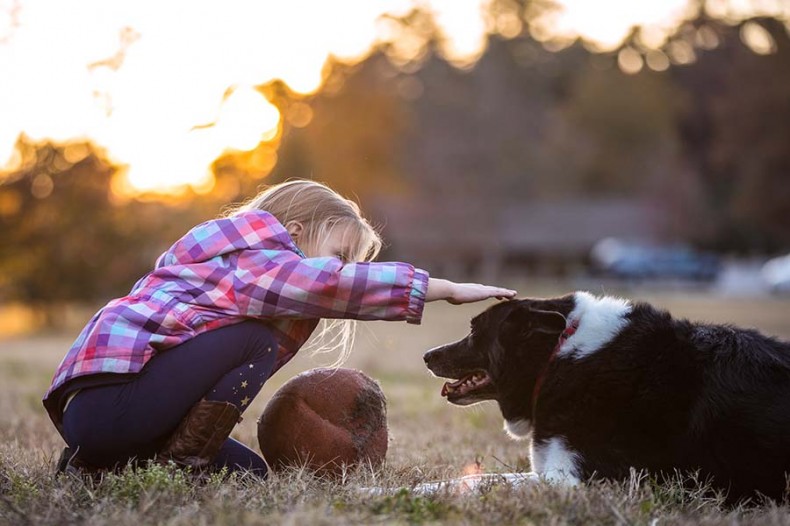 A prison yard may be the last place you’d expect to see a dog running, playing and learning the ropes of obedience. But at Pamlico Correctional Institution in Bayboro, this scene is the norm: Through the “New Leash on Life” (NLOL) program, inmates are assigned as dog trainers and tasked with rehabilitating shelter dogs who need a second chance. 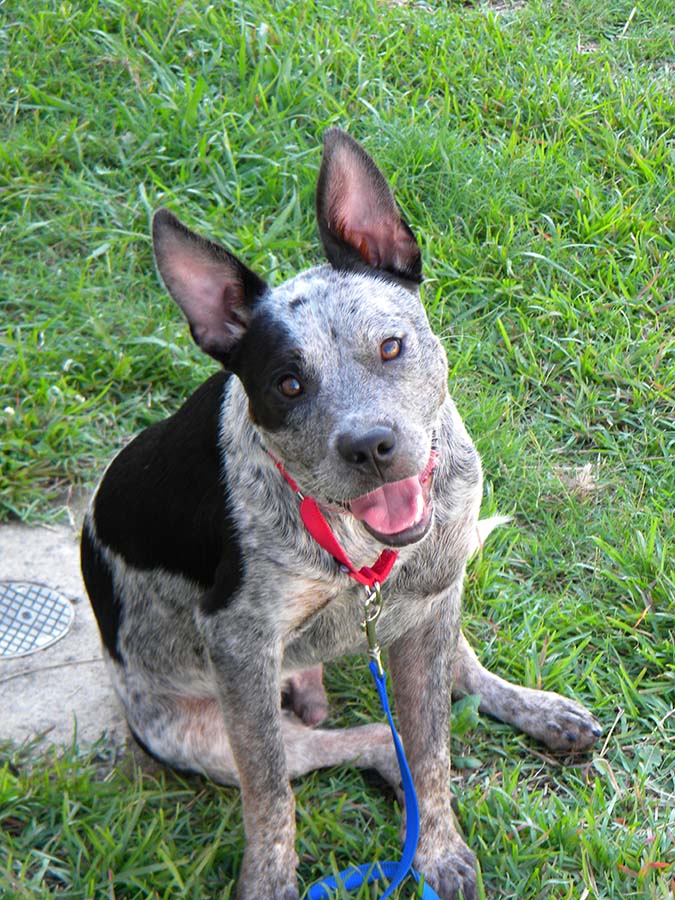 Blue, one of the first graduates of the Pamlico “New Leash on Life” program (photo by Pamlico Correctional Institution)

“They’re given dogs that are broken, and they fix them,” says Jackie Schmidt, president of the Pamlico Animal Welfare Society (PAWS), which provides dogs for the program. “In the process, they’re fixing themselves.”

Sandra Trest, a correctional housing unit manager at the prison, has seen the dogs have a calming effect on those inmates serving as trainers, as well as the general population as a whole.

“If they’re not eating or sleeping, they’re with these dogs,” says Trest, who has coordinated the NLOL program since it came to the prison five years ago. “And it benefits other inmates because they haven’t been around or seen dogs — some for 20 or more years. We place the dogs with trainers in what was our noisiest pod. Since the dogs have been there, it’s a lot quieter.”

To the 56 percent of American households that include pets, the “calming effect” Trest has noticed is likely familiar. The majority of pet owners (63.2 percent) consider their companion animals to be family members, according to the American Veterinary Medical Association’s most recent U.S. Pet Ownership and Demographics Sourcebook, and many believe that their pets can help improve their physical and mental health. Is this possible?

In some cases, yes, according to researchers like Philip Tedeschi, executive director of the Institute for HumanAnimal Connection and clinical professor at the University of Denver Graduate School of Social Work.

“Animals are a very critical part of people’s lives — part of their support systems and some of the most reliable and relevant and valued relationships that people have,” Tedeschi says. Experts agree these relationships can, in turn, often have a positive impact on physical and mental health.

One area researchers are exploring is the concept of bioaffiliation, or the recognition that we learn about our own well-being by looking at other living things around us.

“If you were standing next to a bunch of people, and all of a sudden they all startled and ran away, you would probably think about doing the same thing, right?” Tedeschi says.

Contact with other healthy, living systems can also help us assess our situations and relax, and allow our physiology to respond in kind. 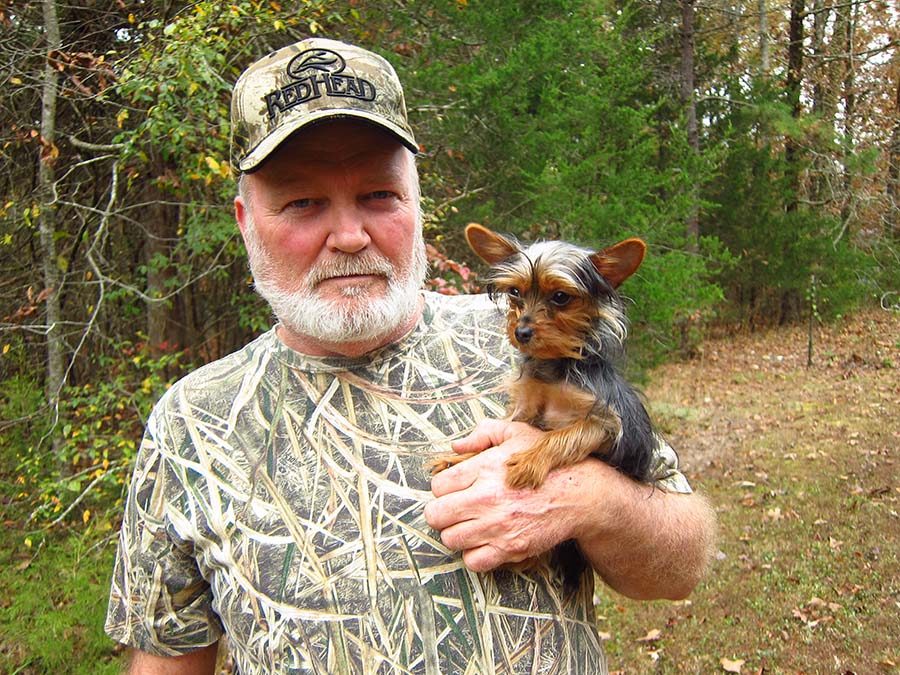 “For example, we can put a resting therapy dog right alongside the body of a traumatized child, and have that child use that animal’s heart rate and respiration to match their own,” says Tedeschi, adding that this process allows the child to recalibrate his or her own physiology and slow down acute stress reactions.

This is particularly significant since the longer the brain of a trauma patient feels unsafe, the less positive their outcome may be.

“So the quicker we can be in moving somebody to a sense of feeling safe, and a sense of well-being, the fewer symptoms we have over the long term,” Tedeschi says.

Leading the way in terms of research about bioaffiliation and other human-animal connection questions is work with the therapeutic use of animals for patients with conditions like autism and posttraumatic stress disorder (PTSD).

Patients with autism spectrum disorders can sometimes have trouble functioning in traditional settings, says Tedeschi, who has collaborated with celebrated autism and animal behavior expert Temple Grandin. Animals communicate using everything except spoken or written words. Many individuals on the autism spectrum are able to use these nonverbal forms of communication to have really successful connections with animals.

Another example of where pet-based interventions are becoming useful is with the military veteran population returning home from extensive deployments in Iraq and Afghanistan. It is estimated that there are now about a half million U.S. service members who potentially are experiencing PTSD and similar traumatic brain injuries. One of the outcomes of PTSD is that many individuals retreat and avoid social connections.

“So when somebody doesn’t trust a human being, in many cases animals are an alternative safe and supportive relationship,” Tedeschi says. “This allows them to begin to utilize their brain in a capacity consistent with healthy relationships, and to begin to recover, to retrain the traumatized brain to be able to function in everyday life.”

A number of specific populations are also prone to becoming socially isolate — for example, older adults who are losing their friend and spouses. In many cases, pets can become very effective social support systems. 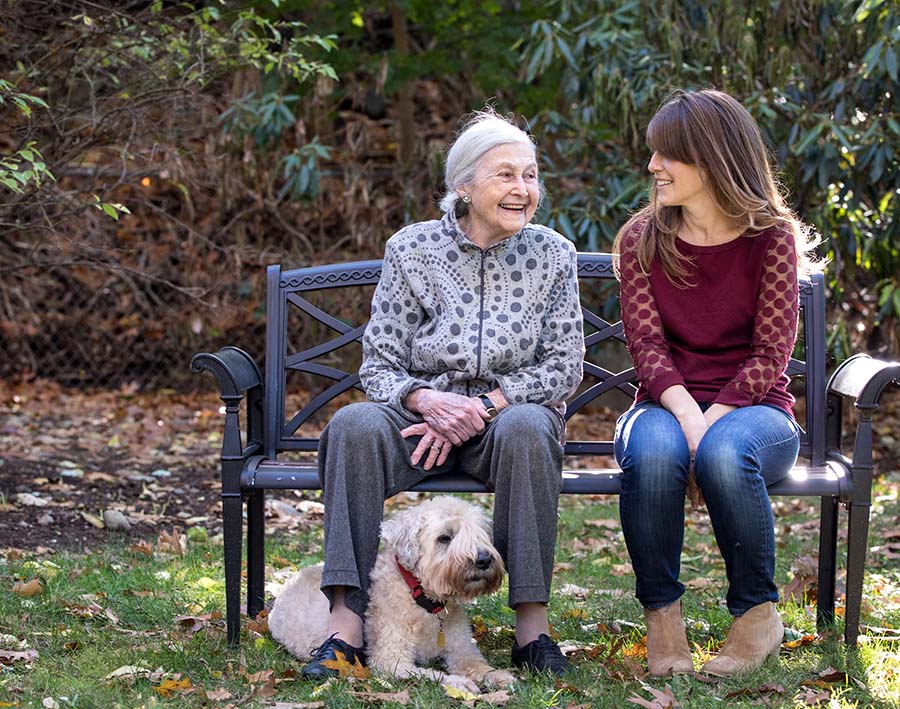 Pets have the power to bring families closer through generations of loving relationships. (photo by Laura Shachmut)

“Social isolation is one of the most dangerous conditions that we treat,” Tedeschi says, emphasizing it has the same overall impact on health as if they smoked a pack of cigarettes a day. “It shortens people’s lives on multiple, different levels, creating these psychological or emotional circumstances where somebody begins to have other kinds of problems,” he says.

For the many millions of adults who are lonely and lacking social connections, as well as for the millions of homeless animals that are euthanized each year, this may seem like a win-win. But experts emphasize that there also has to be a good fit, both between human and animal and within the larger (and often changing) situational context.

Dr. Lee Blecher, who practices family medicine with a concentration in women’s health in Fairfax, Virginia, has seen the positive side of living with pets for many of his patients, noting that they can provide emotional comfort when the patient is ill and companionship when someone loses a family member. But he also observed the downside of a bad match or a changing situation, particularly for those who do not have family members to provide backup support.

“Patients develop emotional concerns when they get ill and can’t take care of their pets,” says Blecher. “And sometimes, economically, they can’t afford the veterinary expenses.”

It is important for pet owners to have a plan in place for the care of their pets, Blecher says, adding that he has one savvy patient who has even written animal care plans into a will.

The primary cause of death in the U.S. is cardiovascular disease (CVD), so studies indicating that pet ownership can improve CVD symptoms and indicators like lipid (fat) profiles, stress response, and, yes, even blood pressure, have been greeted with interest by the health-care community. After critically reviewing the literature, the American Heart Association (AHA) published a Scientific Statement on Pet Ownership and Cardiovascular Risk in 2013 that concluded that pet ownership, particularly dog ownership, is probably associated with decreased CVD risk and may even have a causal role in reducing it.

One possible cause of this positive impact is the increased physical activity usually seen on the part of dog owners.

“We all have patients whose only exercise is that they have to get up to walk the dog three times a day,” Blecher says.

The same AHA statement cautioned, however, that while getting a pet might be a “reasonable” recommendation in some cases, “pet adoption, rescue or purchase should not be done for the primary purpose of reducing CVD risk.” That’s in part because not all situations are the same.

“Individual variation in people, animals and different contexts likely all matter. And so far, it seems as though the quality of the relationship matters,” says Meagan Mueller, Ph.D., a research assistant professor at Tufts University Cummings School of Veterinary Medicine and associate director of the Tufts Institute for Human-Animal Interaction. “A positive, mutually beneficial relationship with a pet is probably going to be associated with more positive outcomes.”

Patients are usually aware of the possible physical downsides of living with pets, Blecher explains. They know that pregnant woman shouldn’t handle cat litter, for example, because of the risk of birth defects from toxoplasmosis, and they know that animal bites and scratches should be treated immediately to prevent infection. They also know that sniffling, sneezing and other allergic responses to pets can create misery for sensitive household members.

But other health benefits of sharing a home with a companion animal, however, are often overlooked, or in many cases are just now coming to light. For example, while some pets may act as allergens, investigators are learning that pediatric exposure to animals might actually prevent allergies later in life.

“Kids exposed to pets early on in life have fewer allergies and pulmonary disorders like asthma. It ends up being a beneficial thing. It primes the immune system. It’s similar to the concept of immunotherapy, or allergy shots,” Blecher says, citing two recently published Swedish studies.

The truth about cats

Much of the research surrounding the benefits of pet ownership focuses on dogs, but where do our favorite feline companions fit in the mix?

It’s something of a myth that cats are less trainable than dogs, Tedeschi says. They can be trained through positive reinforcement, “often in the very same ways that dogs can be trained — but we have different expectations for them.”

Cats can, in fact, learn to participate in our lives much like other companion animals can be trained to do — if you are committed to it, he advises. “You have to be consistent. And most cat owners aren’t,” Tedeschi says. “Most cat owners have a funny, almost roommate-like relationship with their cats, where they love each other but they have habits that drive each other crazy.” 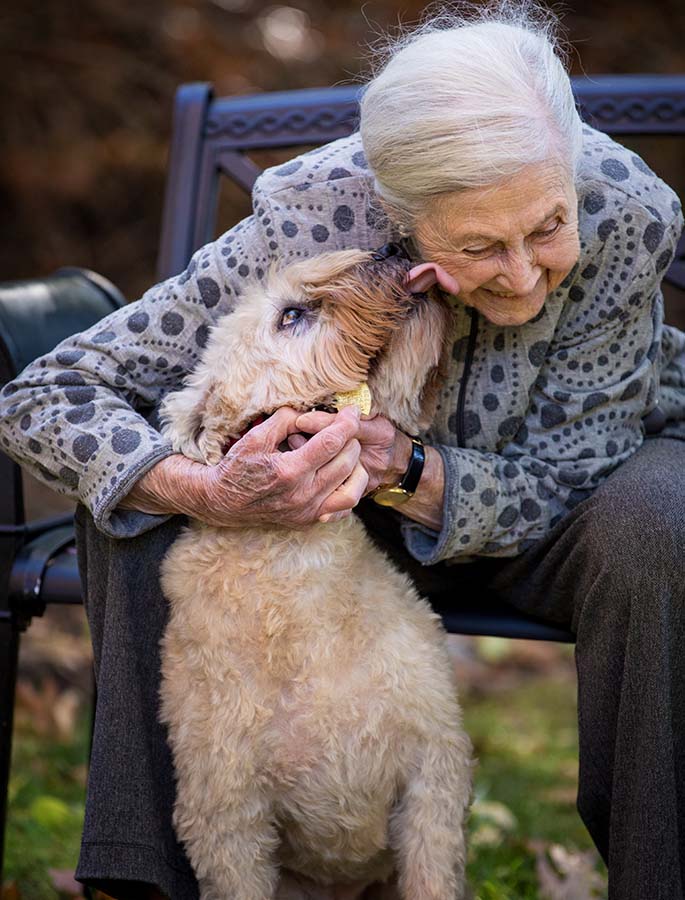 There are programs incorporating cats that teach them to walk on leashes, play games, do obstacle courses, fetch things, and interact with and respond to people in helpful ways, Tedeschi explains. Cats also offer tremendous opportunities for people with minimal space, or minimal access to the outdoors — for example, someone who is housebound or unable to leave home frequently.

And one clinical intervention for PTSD teaches people experiencing hypervigilance to observe their own animals: A role perfect for cats. Cats are fantastic for this, according to Tedeschi, because they are very sensitive to their environments. This allows somebody to form a second opinion about whether there’s an actual risk or not and begin to regain control of their own startle reflexes.

Understanding the different types of people and pets that could help each other most is an area where we need more research in human-animal interaction, according to Mueller. One of the major unanswered questions is determining under what circumstances pet ownership is beneficial.

At Pamlico Correctional Institution, those benefits are clear, and the relationships between inmates and dogs are clicking.

“A lot of these guys have no self-worth — there are no ‘warm fuzzies’ allowed in a prison,” PAWS’ Schmidt explains. “But now they have an animal they can love. I’ve seen a lot of them turn their lives around.”

A.D. Lively is an Arkansas-based writer specializing in health and wellness. Scott Gates contributed to this article.