Bonnie Monteleone is a researcher and activist, as well as an artist. Here she explains her ocean plastic-focused art installation, “What Goes Around, Comes Around.”

Bonnie Monteleone is out to make a positive difference in our world. The Wilmington-based researcher can often be found along the gunwales of a boat off the Carolina coast, net in hand. But it’s not fish she’s after — it’s plastic.

For Bonnie, it was not enough to obtain facts and figures from other people’s work; she wanted to see the problem and conduct the research herself. Her first research venture was aboard a research ship sailing the northern Pacific, documenting the trash making up the Great Pacific Garbage Patch.

“My biggest question was if it was just an urban legend, or if the garbage patch really was a floating island, twice the size of Texas, thousands of miles away from land,” she recalls.

She has since collected plastic marine samples from around the world, including four of the five main ocean gyres, or systems of ocean currents, and has seen that the plastic problem stretches well beyond the Pacific Ocean. And it is made up of something even more insidious than an island of trash: microplastics. 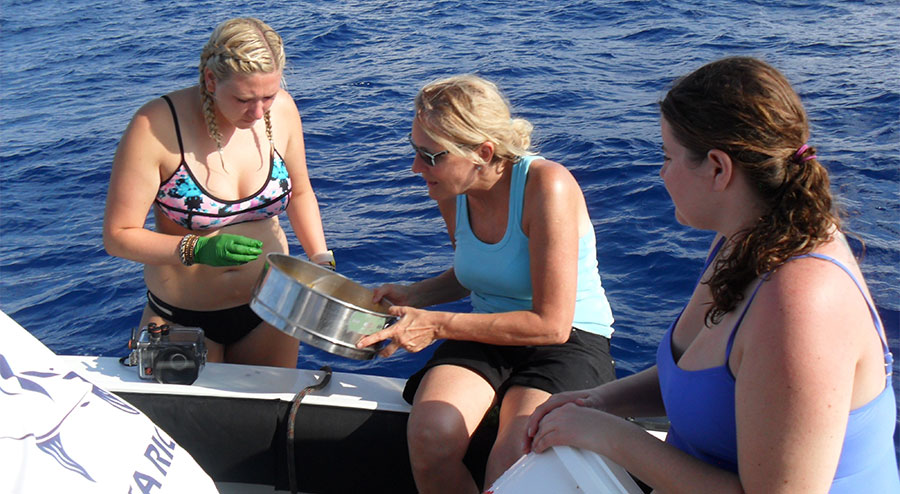 Bonnie (middle) and UNCW POP members catalog the types of plastic retrieved from the ocean. The most unusual items they have found are toilet seats and a fish trapped in a plastic oil bottle.

“That’s where the real danger is,” Bonnie says. “Microplastics are small enough to enter the smallest form of life on this planet and are bio-available all the way up to the largest animals … Plankton can’t eat a bottle but can eat microplastics.”

Bonnie wanted to share her knowledge and experience, and teach others that together we may be able to make a dent in the problem. Most of the plastic entering the ocean originates from land-based sources. If we clean up the land, rivers and shoreline, less plastic will enter the ocean, she explains. Her realization that most people are unaware of the plastic dilemma sparked the inception of the nonprofit Plastic Ocean Project, Inc. (POP), which she co-founded with Paul Lorenzo in 2012.

POP has initiated local awareness campaigns, clean-up activities and projects around the Wilmington area focused on eliminating plastic waste from our environment. In addition to the clean-up activities, POP is researching methods to recycle reclaimed plastic.

Their innovative projects have spread internationally — POP research on the ingestion of microplastics by zooplankton was featured in the documentary, “A Plastic Ocean.” And the organization is scheduled to open a Plastic Ocean Research and Innovation Center in collaboration with UNCW in Wilmington on September 21.

“It’s a huge deal, because we’re looking at the plastic problem and the solution side. There are other places that look at one or the other, but we’ll be doing both,” she says. “We hope to expand our curriculum into a degree program through UNCW, attracting bright minds from all over the world to come to Wilmington and study.” 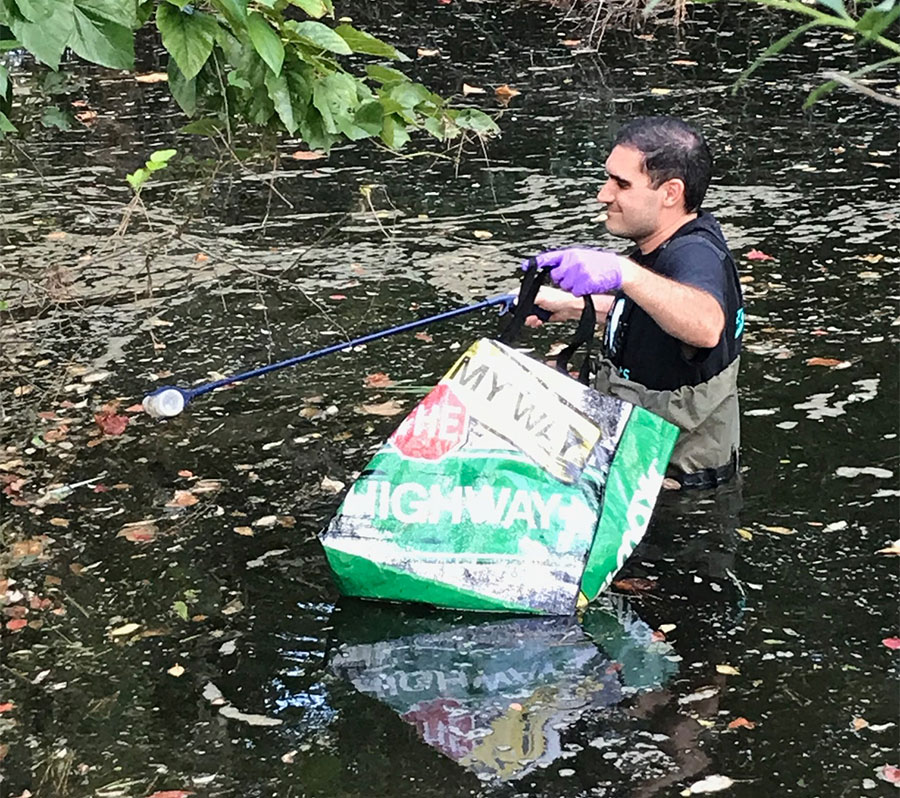 Volunteers go to great lengths to remove trash from waterways before it makes its way to the sea.

A hurricane, a change of plans

Plans for the innovation center hit a snag in September 2018, when Hurricane Florence destroyed UNCW’s science building. The building was a loss, though for other North Carolinians, the damage was much worse. Communities in Eastern North Carolina were devastated by the storm. POP’s priorities switched, and Bonnie focused on doing all she could to help her community recover from the carnage.

“It was heartbreaking. People’s lives were washed away during the storm,” she says. “We’ve found photo albums, toys, baby shoes, trinkets and things near and dear to people’s lives scattered along the side of the road. It was terrible.”

Storm recovery became Bonnie’s central focus. She and POP volunteers initiated a clean-up campaign, although it turned out to be a project much larger than just a handful of volunteers could tackle. Not only were people affected by Hurricane Florence, but the environment suffered a heavy blow as well — vast numbers of trees had fallen victim to the storm’s high winds and floodwaters.

“The destruction from Florence was so massive. It’s hard to know the number of trees we lost,” remarks Connie Parker from the Alliance for Cape Fear Trees. “In Wilmington alone, tens of thousands of trees were destroyed. It was the same outside of the city, and even more in the outlying counties where there was flooding. We must have lost at least 100,000 trees overall.” 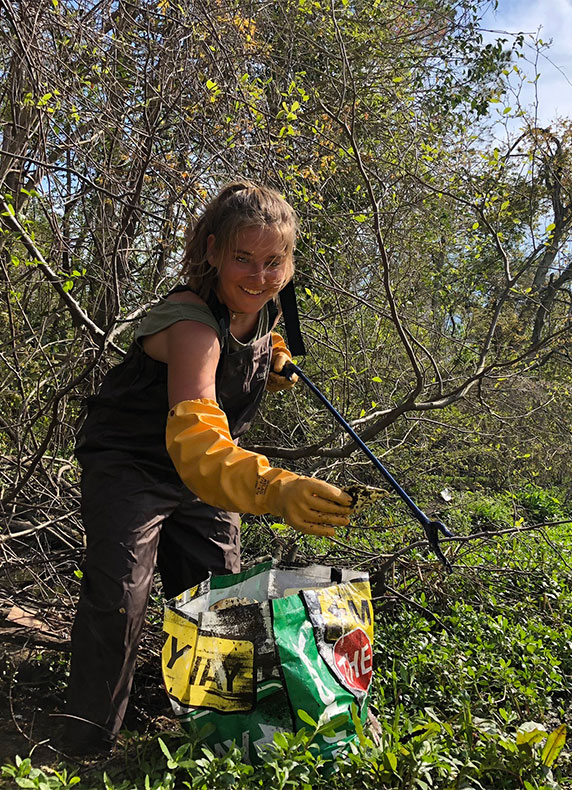 After Hurricane Florence, trash littering residential and woodland regions was not being cleaned up. Volunteers with the Trees4Trash project have gathered tons of garbage in just a few months time.

“Something needed to be done to inspire people to come out and do this very important clean-up effort and replant trees, so we can get back the canopy we lost,” Bonnie explains.

Replacing trash with what belongs

Putting Bonnie’s thoughts into action, POP formed the Trees4Trash initiative. Once a month, volunteers gather trash, weigh the bags, separate out recyclables and transport the garbage to the dump. In return, POP and other local groups will plant one hardwood tree for every 25 pounds of trash removed from the environment — “removing what doesn’t belong there and replacing it with what does,” as Bonnie puts it.

Other individuals and organizations see the promising future of Trees4Trash and are partnering with POP.

“Trees are the building block for a lot of our habitat ecosystems, whether they’re providing nesting for owls, hawks and songbirds, resting areas for turkeys at night, or the forage they’re providing from the seeds, nuts and fruits they bear,” explains Tim Gestwicki, CEO of the North Carolina Wildlife Federation. “Marine debris is a huge problem for our aquatic and wildlife species. Getting that debris out of the terrestrial ecosystem before it reaches the ocean is huge. So we need to clean one ecosystem in order to enhance another.”

“The wonderful thing is, Trees4Trash can be replicated anywhere,” Bonnie says, sensing that POP’s efforts thus far are only the beginning. “We hope to continue to build partnerships and restore the environment by removing manmade debris and increasing the tree canopy across our country.”

Visit plasticoceanproject.org for information about the grand opening of the Plastic Ocean Research and Innovation Center on September 21, and to learn more about Plastic Ocean Project, Trees4Trash and other POP initiatives.

Greta Burroughs has worked as a freelance writer since 2005. You can usually find her typing madly away at her home in South Carolina, where she resides with her husband and three dogs.