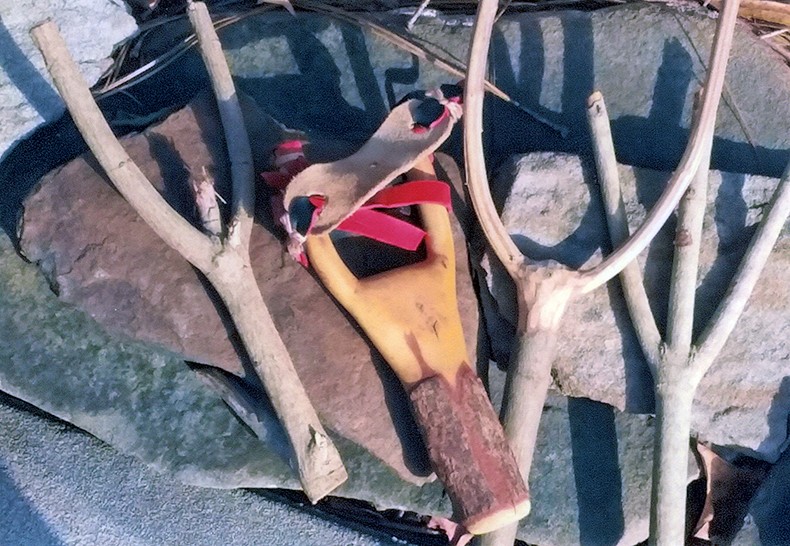 Like marbles during that time, beanshooters were constantly being traded.

In the late 1940s and early 1950s, under the shadow of Mt. Pisgah, us boys made slingshots or beanshooters, which is what we called them. I would spend hours in the woods behind the house looking for that perfect tree branch. Everyone knew dogwood made the very best, so while laurel was good, dogwood was the beanshooter of choice. I would find some I liked and would cut them with my old one-handled Barlow pocketknife, which I also carried to school (imagine that).

I would put the future beanshooters behind the wood-burning cookstove to cure out, then whittle and shape them. If the prongs were too wide, I would bend them inward and tie with baling string until they cured. Everyone knew that red innertube rubber was the best because it would stretch further. My dad would get me some from the Enka plant where he worked. The leather for the sling was always a challenge. I did make one mistake and cut the tongue out of my dad’s boot — only one time!

Sometimes I carried two beanshooters just in case one broke. We used rocks for ammo and shot at everything. Fact is, I got my one-handled Barlow with the tip broke off the big blade by trading a good beanshooter. Like marbles during that time, beanshooters were constantly being traded. I have some now that are not finished, and I have two that are, just in case.

So if you see a white-haired, 74-year-old man with a beanshooter in his back pocket, just ignore him, he’s living in another time.

As a boy I climbed Mt. Pisgah every chance I could,
Always looking for that perfect dogwood.
At the top of a sapling the forks would be
The perfect beanshooter just waiting for me.
With me trusty Barlow I cut out the top
And put it behind Mom’s cook stove to cure a lot.
And one thing that had to stand up to a boy’s test
Was that red innertube rubber, for it was the best…
From Enka dad found me red rubber to use
For it was stronger and stretched further, too.
But for the leather sling it was ready to shoot
And I found a sling in the tongue of dad’s boots.
The slingshot was perfect and one of a kind,
And so was dad’s belt which tore up my behind.
The perfect slingshot had lost its charm, I felt,
For every time I shot it I could feel dad’s belt…
So to Hugh Watts I traded the beanshooter, too
For 10 Chinqapins and an agate or two.
So back to the woods to find the perfect one
And not dad’s boots again, I ain’t that dumb…