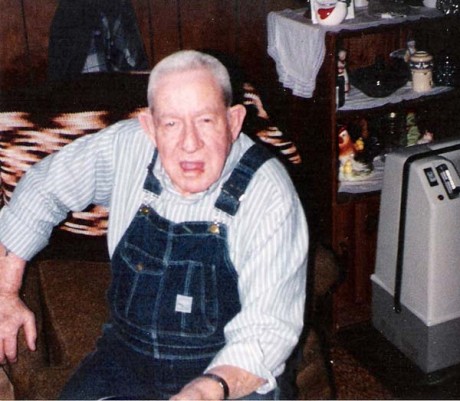 His grandchildren delighted at whatever they could find in his pockets.

My daddy, Charles Jones, wore denim bibbed overhauls all the time. He wore them out hoeing tobacco and mowing tall weeds. He wore them when he fed the hogs and milked the cow. He wore them when butchering the hogs or patching the roof. I remember my mother doing laundry, and a scattering of cow chip would flitter out of his rolled up pant leg when she unfolded them to wash.

Daddy also had nicer bibbed overhauls that he wore to town. He wore these to his doctor appointments and to family picnics. He wore them to church on Sunday with a crisp white shirt underneath.

As Daddy aged, his ability to work diminished, but he still wore his overhauls. He would sit his grandchildren on his lap and let them dig into his breast pocket for his "pocketbook." In there, they would find pictures to look at and occasionally a dollar to keep. He always carried a pencil in the pencil holder next to the breast pocket of the bibs, and a little tablet to write upon. Small faces would smile gleefully as they removed his pocket watch from the bib pocket. Small hands would hold up the watch on its gold chain, watching it spin around and around.

Daddy was buried in a brand new pair of denim bibbed overhauls and a crisp white shirt. In his breast pocket were pictures of his grandchildren and a couple of good-bye notes.