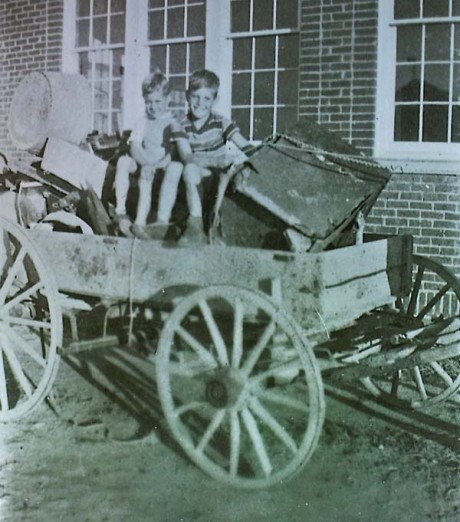 Charles Swicegood and his cousin collected more scrap metal in support of WWII than anyone in the community.

My mom's brother, Charles L. Swicegood, told a story about this photo.

"I was raised in the small community of Tyro, N.C. My dad, Roy Swicegood, was the principal, coach and teacher at the local school, which probably had an enrollment of 200 in all

"World War II was supported with enthusiasm for our country that may have been matched by other communities and towns, but not surpassed. My dad was a leader in our community and big on patriotism. He organized a contest for the local students to see who could collect the most scrap metal for a collection drive. As a boy of 11, I wanted to do my part for the cause, so I recruited my 8-year old first cousin, Jesse Lee Williams Jr., for the collection and delivery of scrap metal. My dad's school janitor, Mr. Davis, had an old humpback horse that I had ridden many times and used to plow our victory garden. Jesse, the horse and I made the rounds to every trash dump, old deserted house, and anywhere else scraps could be found. With no help from anyone else, we won the first prize of $5. More importantly, we felt that we had helped keep America safe."