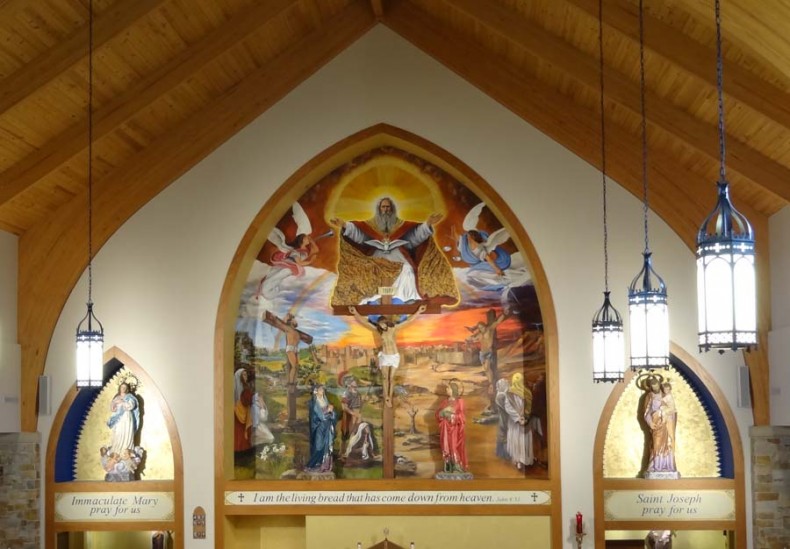 As parishioners attend Easter season services this year at Immaculate Conception Catholic Church in Forest City, the Rev. Herbert Burke will be using a new and majestic teaching aid: a huge 20-foot by 21-foot mural set in the niche, on the altar, above the tabernacle.

Dedicated in 2010, the Rutherford County church has displayed spiritual, inspirational art — both two dimensional and three dimensional — since the beginning. Everywhere you look inside the airy church you see artistic depictions of Bible stories. 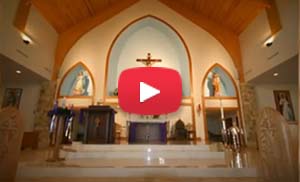 The new, magnificent scene is the work of Concord-based artist Lisa Autry and her husband, Toby. While painting inside St. Ann Catholic Church in Charlotte, Lisa was introduced to Rev. Burke. Before long she embarked on an ambitious series for Immaculate Conception, culminating in the mural installed last February.

"The collaboration of Father Burke's ideas and my artistic experience allowed us to create this original mural," Lisa said. She initially drew the scenes on a 1-inch scale and later transferred them to a 1-foot scale on canvas in her Concord studio. After six months in the studio, they moved the canvases to Forest City and hung them on the prepared wall. Lisa then did final glazing and varnish.

A three-dimensional crucifix and statues stand before the mural to complete the tableaux.

"This mural tells many Christian stories that Father Burke is prepared to teach from," Lisa said.