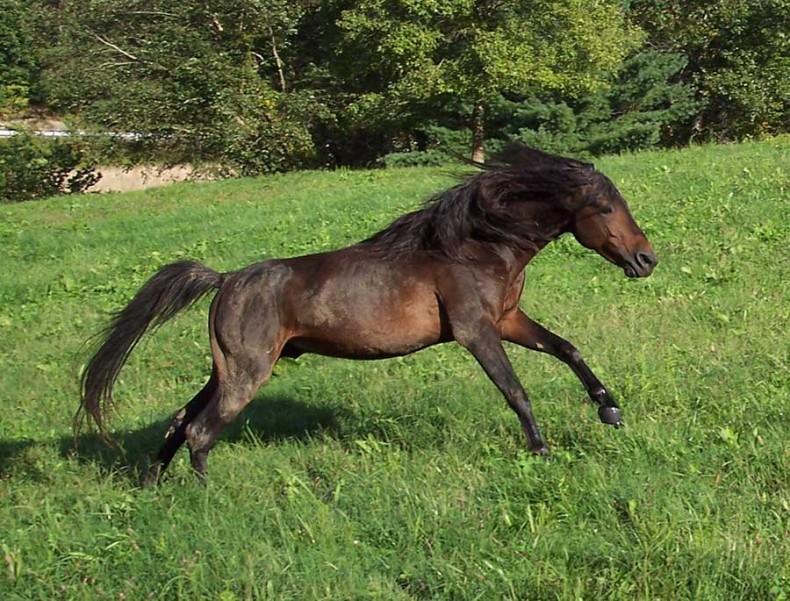 Mention endangered species and most people think of tigers and other exotic wild animals. But endangered also applies to livestock: horses, cattle, chickens, pigs, rabbits and others.

Individual breeders and owners across the country work hard to keep rare livestock breeds alive. They are helped in their efforts by two North Carolina organizations, The Livestock Conservancy and Equus Survival Trust.

Equine breeds with fewest numbers (less than 200 registered births annually, estimated global population of less than 1,600) include American Cream and Suffolk draft horses, Cleveland Bay, Hackney Horse and Newfoundland Pony. Also in critical status are the various strains of the Colonial Spanish Horse (North Carolina’s state horse), such as Banker, Shackleford and Oracoke, and the Foundation Morgan, Caspian and Shire. 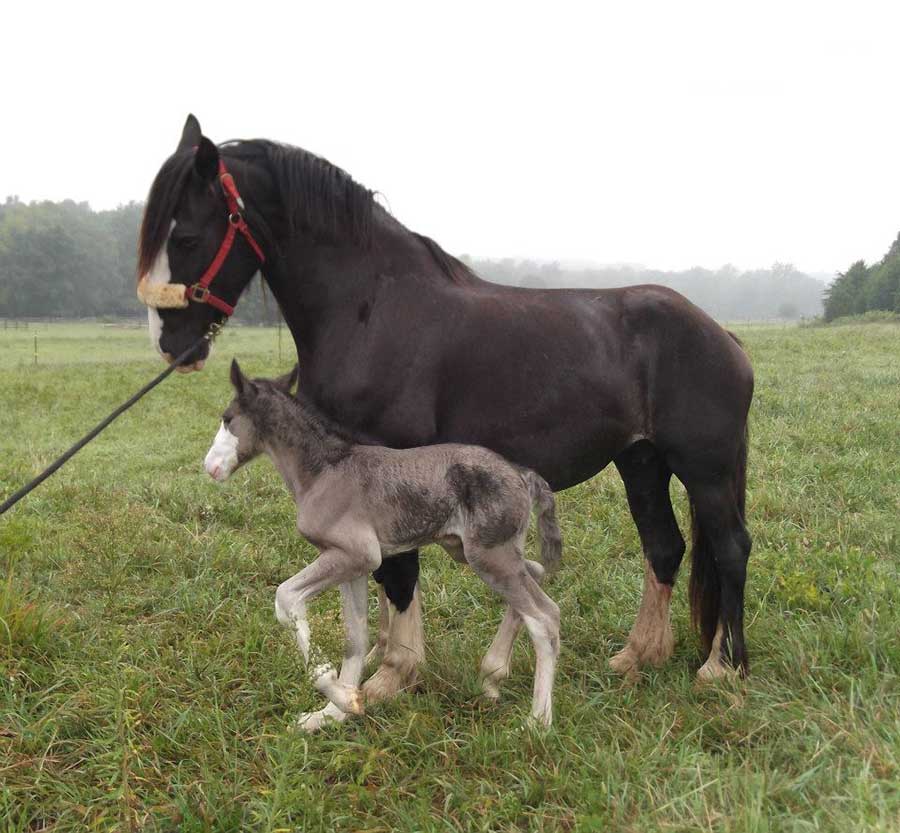 “Riding a Shire is like riding a Lazy Boy,” says Dayla Kohler, breeder of these rare horses at her Walnut Cove farm in Stokes County.

The Shire is the tallest breed of horse. Shires average 18 to 20 hands tall. (A hand measures every four inches, from ground up to a horse’s withers or shoulder-neck area.) Ancestors of modern day Shires carried knights into battle during the Middle Ages. Shires and other draft horses helped settle America by pulling wagons across trails and plows through fields. Shires are still used in farming and logging.

“Shires are the epitome of gentle giants,” Kohler says. “They’re so docile, so willing to do what you want. They’re good family horses, good horses to have around kids. They’re not going to run off with them, and Shires can hold a six-foot, six-inch 250 pound man.”

Shires are excellent for trail riding, “a comfortable, relaxing ride,” says Kohler, who likes to ride without a saddle. “They’re amazing, pulling a cart. It’s hard to resist those feathers [on their lower legs].”

Every year Kohler organizes a Parade of Breeds show at the Stokes County Fair. She brings her Shires and arranges for other rare horses to appear.

Victoria Tollman in Lowgap, Surry County, is executive director of the Equus Survival Trust, which works to promote rare breeds of horses and ponies. She helped take Fell ponies from critical status, with less than 20, to over 500 in the U.S. now.

“If you can only afford one horse for the family and you don’t want something full sized, get a Fell pony,” Tollman says. “Most adults can ride them unless they’re really tall.”

Bred as pack ponies that could carry 250 pounds, Fell ponies traveled 200-mile circuits in northern England, before railroads developed. Fells are usually black with an adorable shaggy-haired look because their manes are not clipped for showing.

“They’re great for driving and can jump,” says Tollman. “A great all-around pony.” 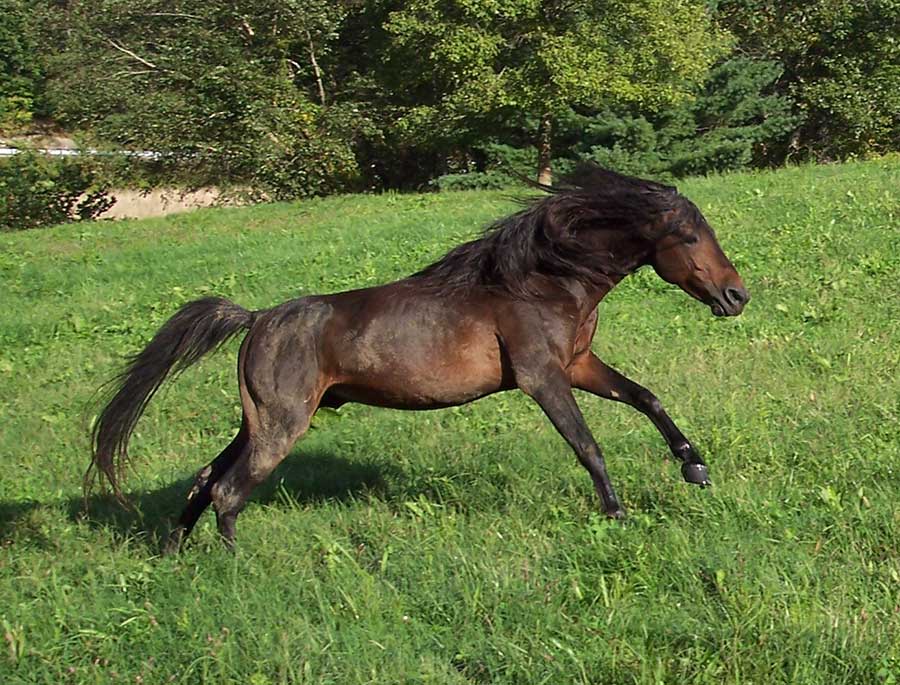 Tollman is now focused on helping Caspian horses, once considered extinct. These small (averaging 11.3 hands) hot-blooded horses were bred in ancient Persia (Iran) to pull warriors’ chariots. They look like smaller Arabians, but predate them by 2,000 years.

“A Caspian is an excellent ‘first pony’ for a child,” Tollman says. “They’re dog-loyal, very intelligent, excellent jumpers, and anybody can drive them.” 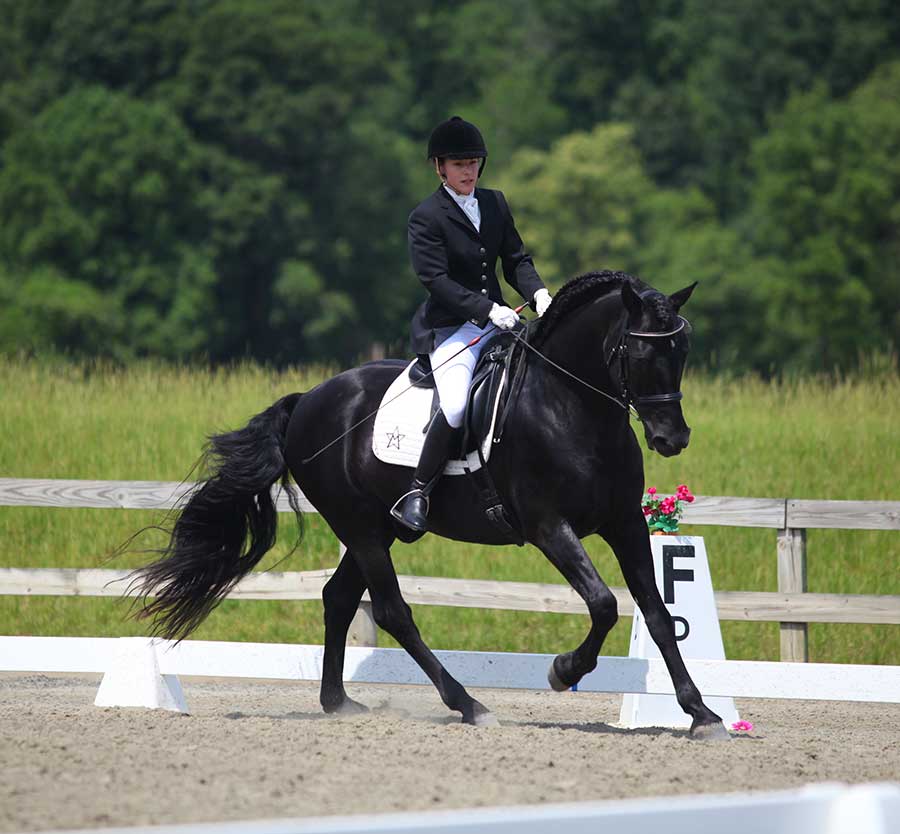 Ina Ish of Siler City first rode a sturdy, handsome Foundation (aka Traditional) Morgan when she was a teenager. “I passed out while riding, and when I came to, the horse had not moved one single step!” she says. “He could have dumped me and run, but he didn’t. So in addition to aesthetically pleasing me with the Baroque look, I fell in love with the Morgan mind and heart.”

Ish describes Foundation Morgans as “people” horses, saying, “They genuinely care for their owners and are very intelligent, never quit, will try for you all day long, take care of you and be your friend.”
Foundation Morgans descended from the original Morgan horse bred in Vermont. They were taken west by pioneers, U.S Cavalry troops, and the Pony Express. Ranchers used them to work cattle, and still do.
Morgan breeders later began crossing their purebred horses with Saddlebreds and other breeds to produce a taller, lighter Morgan.

Ina Ish describes the Foundation Morgan as primarily “the working horse it was bred to be” and “the Cadillac of driving horses.”

Quick on their feet, Foundation Morgans range from 14.1 to 15.2 hands, though some are taller or shorter. Colors include bay, chestnut, black, gray, even palomino and multicolored splashes.

Foundation Morgan breeder Tonya Bruno of Hillsborough (a member of Piedmont EMC) also discovered her ideal horse as a teenager. She worked at a barn that had “a beautiful Morgan gelding there who epitomized the Morgan horse from [the children’s book] ‘Justin Morgan Had a Horse.’”

Later, “I went searching for my first horse to own, that beautiful, versatile horse. I was shocked and frustrated at how difficult it was to find them!” Bruno says.

Located in Pittsboro, The Livestock Conservancy helps would-be owners, like Bruno was then, find breeders of rare livestock. It keeps tabs on the numbers of animals of about 200 rare breeds.

“These rare breeds are part of our national heritage and represent a unique piece of the earth’s biodiversity,” says Eric Hallman, TLC’s director.

Jeannette Beranger, TLC’s research and technical programs manager, says that increasing the numbers of rare horses is challenging. “Fewer and fewer people can afford to keep horses, and even less can afford to breed them.”

She’s encouraged, though, by one trend: “As people are becoming more interested in sustainable agriculture, horses are often seen as a more cost-effective choice than a tractor.”

Shires, Foundation Morgans, Caspians and Fell Ponies are quite different from each other, but they’re all fortunate to have these dedicated North Carolinians working on their behalf. The passion and knowledge these breeders and specialists have will help make these special equine breeds less rare and even more appreciated.