"They wanted a better life for us" - Carolina Country
Feature Story

"They wanted a better life for us"

Support for restoring the meaning and purpose of the Rosenwald schools. 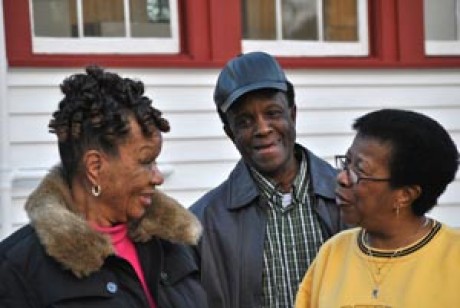 It’s been more than 50 years since Andrew Corbett, Betty Thompson and Dixie Corbett were youngsters at Canetuck Rosenwald School. But they’re back at work there, as board members of the restoration group, the Canetuck Community Senior Center.

Getting an education required determination — and a strong constitution — when Betty Thompson attended Canetuck School in the 1940s and ‘50s. At 6 years old, she walked with other rural students 6½ miles through the Pender County woods. “Some of the mornings were so cold,” she remembers. “We would build a fire on the side of the road to stay warm,” fellow student Dixie Corbett says.

When they got to the school, there were no bathrooms; the students used the privies in the yard. There was no electricity in the building. Students read by light from the many windows. (Today, the building is lighted by Four County EMC.)

As tough as conditions were, Thompson, Corbett and other students still have a warm spot in their hearts for the white-frame building tucked among Spanish-moss-draped pines.

They are like many other African Americans who attended the Rosenwald schools built for rural black children in the segregated era of 1917–1932. “We had some No. 1 good teachers there,” says Eunice Jones Williams, who started at Castalia Rosenwald School in Nash County in 1927, not long after it was built. She later went on to Columbia University and a 40-year teaching career. “They were the kind that made sure you did what you could. You didn’t play around.”

An alliance formed by Sears-Roebuck executive Julius Rosenwald and local African-American communities built more than 5,300 of these schools across the South. The families, most of whom were sharecroppers, sold chickens and eggs, held community suppers, cut timber and otherwise stretched their pennies to raise money.

“They wanted a better life for us,” says Thompson, who went on to advanced study at Columbia University and a career in educational administration in New Jersey.

“I’m very thankful, because I’m a product of that,” says former Warren County Training School student Thomas A. Harris of Littleton, a retired longshoreman. “I learned well. I went out in the world and was able to compete with just about anybody.”

During school consolidation and integration of the 1950s and ’60s, the schools closed. In recent years, a recognition of what they have meant not only to African Americans but to America as a whole is prompting a groundswell of restoration efforts.

Their establishment was “a major change in the history of America,” believes JoAnn Stevens, president of the Rosenwald Center for Cultural Enrichment in Snow Hill. Without them and the educational opportunity they offered African-American youth, America would have been a much different nation, she says.

Ten restorations in North Carolina were among those selected nationwide the last several years to receive $40,000 to $50,000 grants from the Lowe’s Charitable and Educational Foundation through the National Trust for Historic Preservation. Here are their stories:

Alumni of Walnut Cove Colored School in Stokes County, including Dorothy Dalton and her sister Mary Catherine Hairston Foy, raised more than $400,000 from 15 different sources to turn it into a senior center which hosts, among other things, meetings of the Walnut Cove and Stokes County commissioners. It won a National Preservation Honor Award from the Trust in 2000, and in so doing, sparked much of the current interest in Rosenwald restoration, believes development consultant Angelo Franceschina. The Lowe’s grant was for roof and ceiling repair, which has been completed.

Restoration of Ware Creek School in Beaufort County, a member-account of Tideland EMC, has also been completed. Beaufort County Community College had been holding adult education classes there, but a lack of central heat and air had hampered use. Now Ware Creek Community Development has not only installed climate control, but new plumbing, insulation and storm windows as well. Executive director Alethea Williams-King, who remembers her grandfather’s pushing for better education for the area’s African-American youth, is compiling an oral history.

Kinston-based Lenoir Community College, which owns Snow Hill School/Greene County Training School in Greene County, envisions it as a community literacy center. The school, which once was the only high school for African Americans in the county, currently houses a textile manufacturer. It and an adjacent ball field are both on the National Register of Historic Places and mark the centerpiece of what the local Rosenwald Center for Cultural Enrichment hopes will become a historic district.

An alumni association numbering some 800 members in seven states has long used the renovated principal’s home and cafeteria at Warren County Training School/North Wise High School to better the lives of county youth. They sponsor Saturday classes for at-risk students and a summer dropout prevention program, and they have awarded $40,000 in college scholarships. They’re planning a cooperative effort with Vance-Granville Community College to provide classes and certification in green technology. They’ve put a roof on the main building but other renovation awaits funds. “I would like to get a senior citizens center and a medical facility (where) a doctor could come in maybe two or three times a week,” says association president Thomas Harris.

Castalia Rosenwald School in Nash County. was “just a vacant old building sitting there, about to fall down,” when his father started work on it, says John K. Williams Jr. At his father’s death, he couldn’t refuse leadership of the restoration group, the Castalia Community Development Association. “They had fixed too many chicken plates and whatever else they could do to raise money to fix it up,” he says. The association fixed the floor, installed siding and insulation, and took care of “a big old snake.” Williams envisions the restored building as a site for Nash Community College’s GED programs, a health center where professionals could administer tests and give advice, and a center for tutoring.

Renovation is still in the planning stage at Princeton Graded School in Johnston County. When it’s complete, it will provide a site where private nonprofit TESS (Taking Education Skills Seriously) can provide college scholarships, field trips, leadership training and other extras for students facing financial and other challenges. A long-term goal: accredited out-of-school-time programs that coordinate with the public schools.

The transformation of R.A. Clement School in Rowan County into a community center is still in the fundraising stage. The long-term goal of the West Rowan Neighborhood Center Advisory Council is to raise $300,000, and “we’re not even one-third of the way there yet,” says co-president Vera Avery.

Two schools, Alligator School near Columbia in Tyrrell County and Hamilton School in Hamilton in Martin County, will be used as tourism/cultural centers to tell the stories of their eastern North Carolina areas and of the Rosenwald schools. In Hamilton, some 40 school alumni attended a reunion organized by Roanoke River Partners, which is leading the restoration effort (www.roanokeriverpartners.org). They have contributed artifacts, including a school bell, and stories that are included in a book, “Hamilton Rosenwald School Preservation Story: Preserving the memories, the faces and the place.” Order it from Carol Shields at (252) 826-5719.

At Canetuck, Andrew Corbett remembers when he was one of the students walking the 6½ miles to school. At the first hill, he says, “We all would meet together.” He and several fellow students still meet together in their old classroom as board members of Canetuck Community Senior Center. They recently had insulation installed, a half-century of caulking removed from the 1922 windows, and the exterior painted a gleaming white with wine-colored trim. “It’s beautiful. It’s simply beautiful,” says board secretary Betty Thompson. “And now we have to get started on the inside.”