A Legal Career in the Making

Dylan Blackburn is building on his Sampson County roots 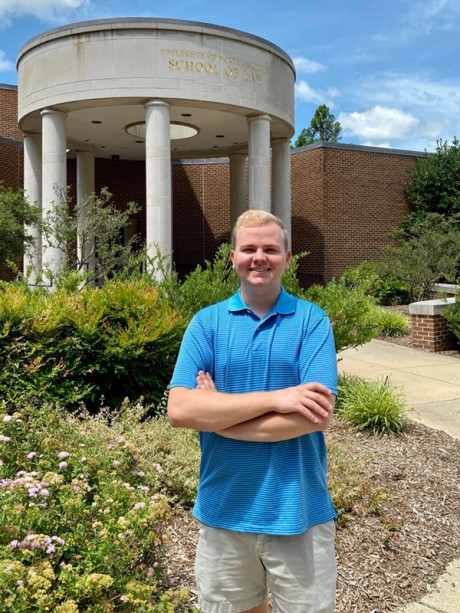 Howdy, North Carolina. Dropping by just to visit, sit a spell, and tell a tale. Not a tall one. A reg’lar-sized one about a fella sitting a few rows behind me in Judge Mark Davis’ Judicial Process class.

One doesn’t encounter a lot of twangs in Van Hecke-Wettach Hall in Chapel Hill, so when I heard a “flatlander” chime in one day, I introduced myself. Friends, please meet a local Spivey’s Corner boy done good, Dylan Blackburn.

A proud graduate of Midway High School in Sampson County, Dylan speaks fondly of his rural roots: “There’s such a sense of community. It can be homogenous at times, but it’s a tight-knit community. The culture is its own. Ya know, the hollerin’ contest and, of course — ” I prepare my eyes for rolling. “ — Eastern NC barbecue.”

“You could be a little more open-minded there, Dylan,” I reply, knowing Lexington style to be the superior of the two. “I am. I opened my mind to try it. I found it insufficient.”

“Stepping in someone else’s shoes, I’m advocating for an outcome running counter to my preference. In those moments, my ability to empathize and find compassion grows."

We share a few moments of calm reflection for the sake of our friendship.

From high school, Dylan’s journey led to Campbell University, where he double majored in economics and business. After graduation, his experience representing South River EMC on the 2013 NC Youth Tour inspired a move to our nation’s capital.

“Growing up where I did, I thought a career in Washington, D.C., too distant and unreachable,” he explains. “Youth Tour made D.C. approachable.”

“I think most folks have preconceived notions of what they’ll experience when calling their elected representatives. People were usually shocked to find someone from Samson County on the other end of the line.”

Dylan’s work in D.C. coincided with trying times for our country. “COVID was horrible. It was such a turbulent time. Navigating those decisions and trying to serve in times of crisis was extremely tiring and difficult, but it was also rewarding.”

So, from the Capitol rotunda to the rotunda in Van Hecke-Wettach Hall, Dylan continues to serve.

Our shared interest in models of judicial interpretation led us to enroll in Judicial Process taught by Judge Davis, a graduate of both UNC School of Law and Duke School of law, who has experience at the Superior Court, Appeals Court and Supreme Court of North Carolina. It’s fair to say we had both an impartial and knowledgeable teacher in Judge Davis.

“Obviously we can’t argue our individual opinions,” Dylan reflects on the course. “We must make well-reasoned, legal arguments, but I didn’t expect us to be challenged as much as we were. Stepping in someone else’s shoes, I’m advocating for an outcome running counter to my preference. In those moments, my ability to empathize and find compassion grows. Exercises like that make us better lawyers and citizens.”

Dylan directs to me, “I mean, you know, you were in there.”

I nod in agreement. We sit in our shared memory as “almost graduates” before the air morphs us back into “still law students.”

“Hey, what’d you get on that paper?” Dylan asks.

I chuckle, “Man, I dropped the class right before the paper was due. Bit off way more than I could chew.” We laugh.

Upon graduation, Dylan will be starting his legal career in Charlotte at K&L Gates. Who knows what chapter he’ll write after that one?

Jacob Brooks made a C in his tort law class. He’ll catch grief from Mamaw Carol when she finds out. The quart jar Papaw Jerry gave him is half full.