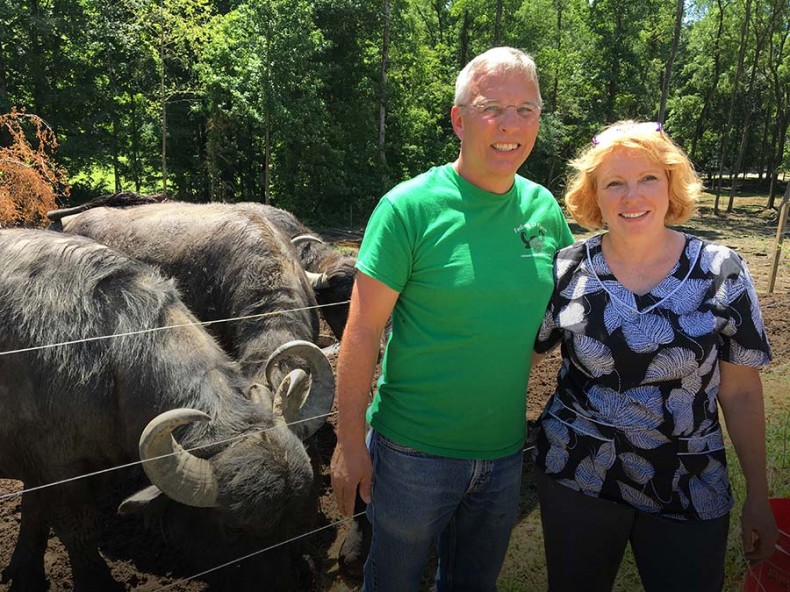 David and Faythe DiLoreto with their water buffalo.

Early morning mist hangs low over the North Carolina countryside in Rowan County. A thunderstorm the evening before delivered needed rain, welcomed by gardeners and farmers, as well as the herd of water buffalo at Fading D farm. 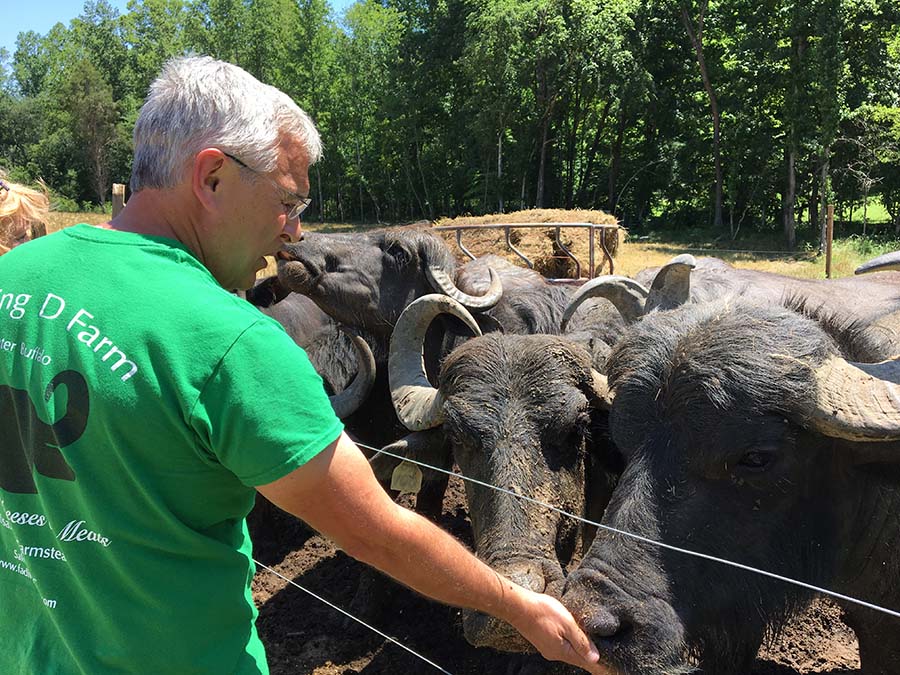 These huge beasts, not to be confused with the American bison, originate from Asia. They love water and mud puddles. Their distinguishing features are their large curved horns and, to some cheese aficionados, the “Mozzarella di Bufala” made from their milk. The fresh, soft cheese originated in southern Italy when water buffalo were imported there centuries ago.

Fading D Farm is the only water buffalo farm and creamery in North Carolina, and one of only a handful in the entire country. Owners David and Faythe DiLoreto couldn’t have predicted just a few short years ago that they would be immersed in building a water buffalo herd in their quest to produce the coveted Mozzarella di Bufala cheese.

It all happened “kinda as a lark,” says David. 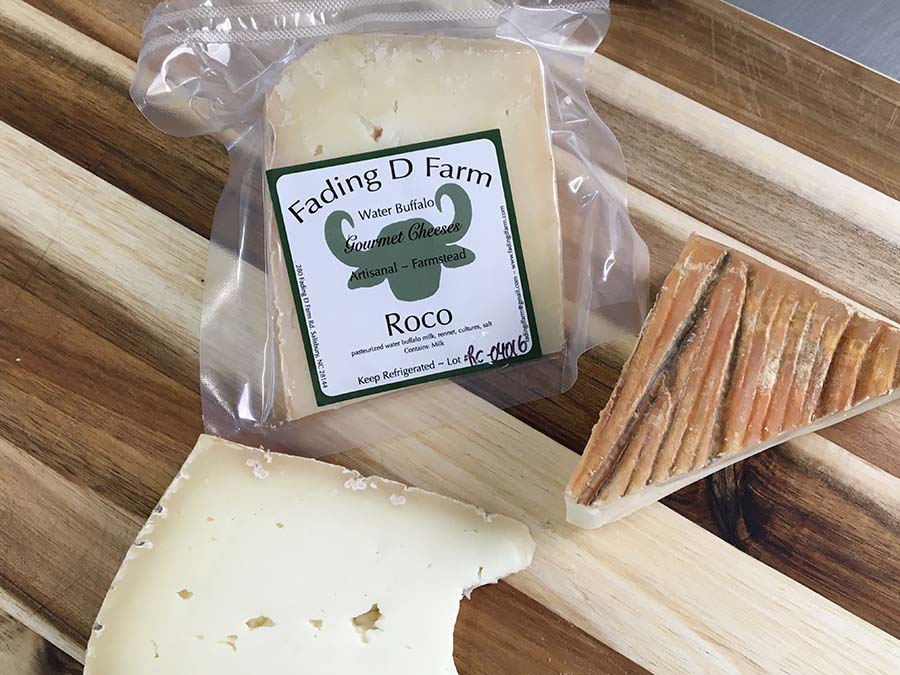 The farm’s store at 295 Fading D Farm Road in Salisbury is open Wednesdays and Saturdays from 3 to 6 p.m. Its cheese is also sold at farmers markets in Charlotte, Davidson and Salisbury on Saturdays. (Order the Mozzarella di Bufala in advance; because of its short shelf life, Faythe makes the cheese based on requests.) The Salisbury Wine Shop; Orman’s Cheese Shop in Charlotte and Raleigh; and Weaver Street Market in Carrboro, Chapel Hill and Hillsborough also sell Fading D Farm’s cheese.

For this retired family physician and his wife, it started with a trip to Italy in 2011. One taste of the famous Mozzarella di Bufala, a creamy white cheese that is sometimes called “the pearl of the table,” and they were hooked. When they returned home they searched for a place to buy the cheese but couldn’t find it — it’s difficult to import because it must be eaten within a few days. So Faythe found a small herd of water buffalo instead and bought them as a birthday gift for David. Perhaps, she thought, they could make the cheese they fell in love with.

They now have 45 water buffalo in their herd with a goal of having 20 in rotation for milking. The bull calves are raised for meat. All are hand raised to get them used to being around people.

“We hold the bottle for them and interact with them when they are young. It keeps them calm,” David says. This will help when it comes time to milk them.

“Water buffalo are closer to the wild genetically,” he explains. “A water buffalo produces about 1½ gallons per day while a dairy cow, such as a Holstein, which has been bred to produce milk, may produce 8 to 10 gallons.”

The hand-raised buffalo are like pets. They all get names. “The girls get cheese names like Havarti, Queso, Halloumi, Mozza and Rella,” says David. “The boys get the meat-related names — Meatball, Mr. T-Bone, Stew and Sirloin.”

As with any dairy, the days start early and the work is hard, but the DiLoretos are embracing their new lifestyle. They work as a team, each heading up different areas of the Fading D Farm operation (say their names quickly, Faythe and Dr. D, and that’s how they came up with their farm name.) David oversees the animals. Faythe is the head cheesemaker.

“We do everything from raising the cows to making the cheese,” David says. 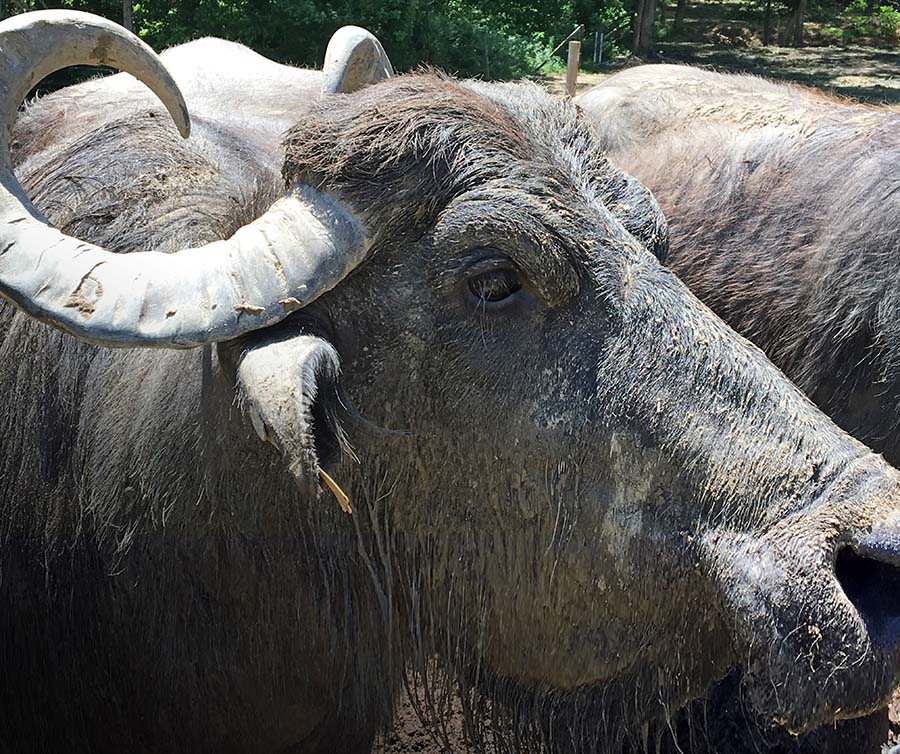 On Mondays and Thursdays, Faythe’s days start at 5:30 a.m. These are the cheesemaking days, and she settles into a steady rhythm of moving the milk from a cooling tank into the pasteurizer, a large tank where she will bring the milk to a high temperature to kill any harmful bacteria. After the milk has been pasteurized, Faythe adds culture and rennet at various stages to make cheese.

The cheesemaking process combines both science and art. It takes most of the day and at intervals throughout she uses a tool called a spino — an oval, whisk-like shape at one end with a long handle — to stir the mixture, which cuts the cheese curds and allows the whey to be released. She goes through this step several times before she can move the curds into molds of various shapes depending on the type cheese she is making on a particular day.

As she works, she touts the attributes of water buffalo milk, which has more butterfat content than cow’s milk, resulting in richer, creamier cheese. It also has more protein and calcium, with less cholesterol. “It is better for those with food allergies or who are sensitive to cow’s milk,” adds David.

When Faythe is at a point in the process where she can step away for a moment, she opens the door to the aging room where the temperature and humidity are controlled. Rows and rows of cheese rounds and squares, each residing on wooden boards that are labeled to signify the date and batch, extend from floor to ceiling. It’s a beautiful sight. 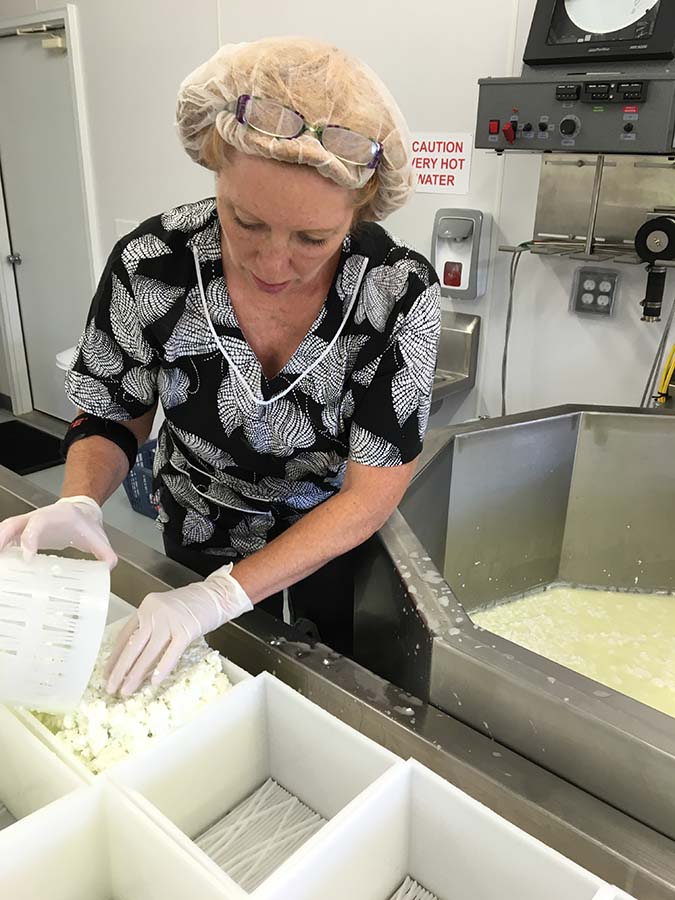 Currently, Fading D Farm sells five different kinds of cheese, both aged and fresh, made from the rich water buffalo milk. Each has its own characteristic and all are creamy and delicious. As David brings three different flavors, Roco, Sapore and Bel Bufala, out of the aging room for a taste test, he shares a bit of the history of cheesemaking, including how Italy names cheeses for its various regions. Fading D Farm has adopted that tradition and has created and named a cheese “Roco” for the location of their farm in Rowan County. “It’s what a lot of people affectionately call Rowan County,” Faythe says.

With knowledge tucked under their belts from an artisanal cheese course in Italy, classes with a master cheesemaker in New England and two years of making cheese in their home to perfect the process, the two opened their state-inspected creamery in January.

The facility includes observation windows so visitors can watch the milking and cheesemaking process, getting some idea of what all goes into the cheese that the DiLoreto’s have come to know so well.

“We know what’s in it. We enjoy it from start to finish and having control over all of it. We know the cows are treated properly. We know the cheese is handled properly,” David says. “It’s such a good product — we love it.”