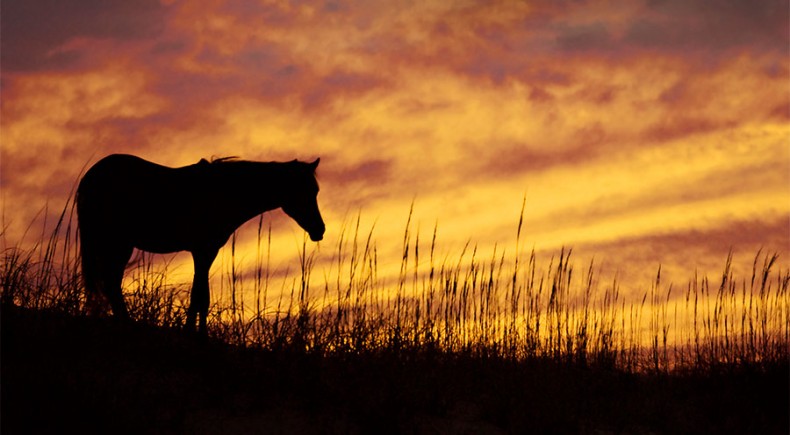 Through a break in the underbrush of a maritime forest stood what seemed like a mystical being. He watched me cautiously as I focused my camera on him. He was a beautiful black stallion—one of the hundreds of wild mustangs that roam freely in parts of North Carolina’s Outer Banks.

His kind have ranged the beaches and maritime forests of the barrier islands for more than 400 years. They once numbered more than 5,000; today there are only a few hundred left, and people worry that they will be crowded out entirely. The horses have become victims to loss of habitat as the Outer Banks becomes more developed, to misguided tourists who try to feed and pet them, and to those who maliciously harass and cause them harm—in extreme cases killing them.

Outer Banks herds are descended from Spanish stallions left by explorers in the 1500s.

Scientists believe horses roamed North America as long as 58 million years ago. Yet, when Columbus set foot in America, he found no horses. They’d disappeared thousands of years before his arrival. Some believe the prehistoric horses failed to adapt to climatic changes that took place, leaving them without enough food.

In the 1500s, European explorers reintroduced the horse back to America. Early explorers found the Carolina coast very interesting—with tales of gold to be found further inland in the mountains—and their sturdy little horses deftly carried them through the coastal region’s swamps and thick forests. But they did not find gold. The Spanish sailed away, leaving their horses behind. The horses, descendants of desert steeds, adapted well to their new home. 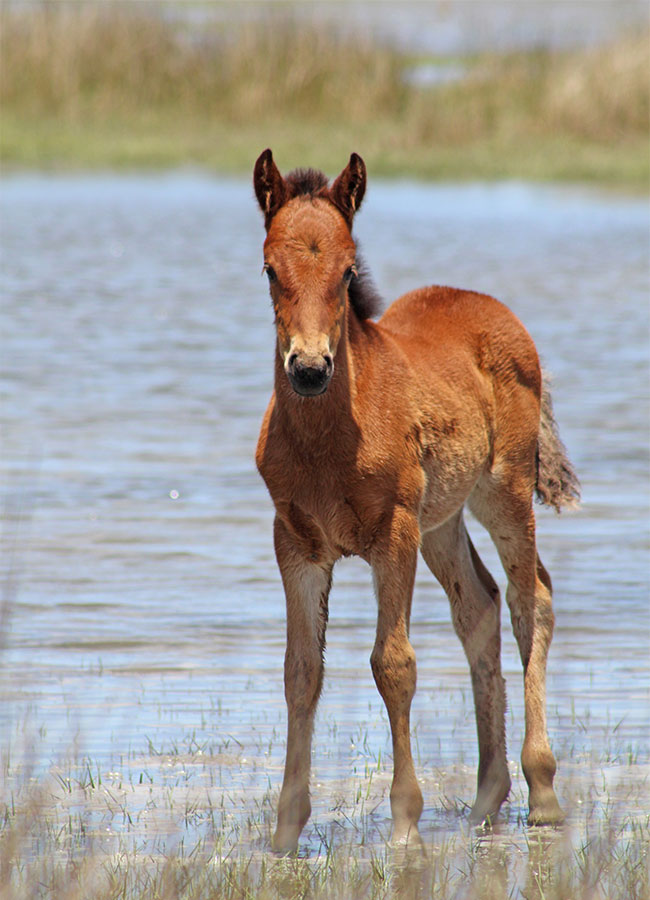 The wild horses of the Outer Banks share the same physical characteristics as the Spanish Mustang. Living in harmony with humans and wildlife, the horses have played an important role in North Carolina’s history, as horses have in all parts of the United States. Along our coast, the equines provided horsepower to haul in fishing nets, aided in lifesaving operations and sped up over-land transportation until the automobile’s arrival.

Interest in proving the horses’ heritage developed in the 1980s, along with a burst of development on the Outer Banks. Hotels, condos and shopping centers sprouted up around the small fishing villages, threatening the future existence of the horses. Disease plagued the largest herd that lives on Shackleford Banks and a small herd on Cedar Island. Starvation almost wiped out the herd on Carrot Island, and the Corolla herd was cut in half when horses were hit by cars speeding along the newly paved Highway 12, according to the Corolla Wild Horse Fund.

People living on the islands, as well as tourists who visit the resort areas, love seeing the horses grazing among the sand dunes and galloping in the surf. They became determined to make sure these beautiful animals would still be around for their grandchildren to enjoy. Protection groups formed, local and federal governments passed protection laws, and the news spread that wild horses in North Carolina were becoming endangered. The people went to work to save them.

The NC General Assembly designated the Colonial Spanish Mustang as our official State Horse in June 2010.

In a cooperative effort, the Corolla Wild Horse Fund (corollawildhorses.com) and the Foundation for Shackleford Horses (shacklefordhorses.org) sponsored an inspection of their local wild horse populations in February 2007. With representatives from the Horse of the Americas, the American Livestock Breeds Conservancy and the American Indian Horse Registry, they spent three days on the islands studying the similarities and differences of the two groups of horses. They observed, measured, and photographed the wild horses, noting the traditional balance and conformation of the Colonial Spanish Mustang. These and other cooperative efforts between the two groups have contributed long strides toward the preservation of the wild horses of North Carolina’s Outer Banks, but the work is far from done. 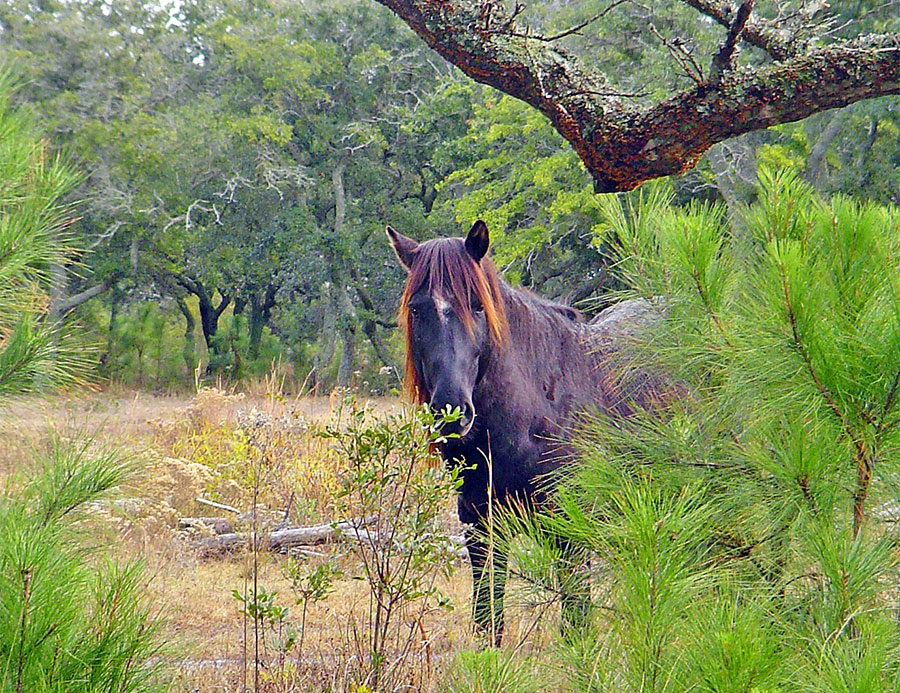 “Corolla Wild Horse Fund is the designated nonprofit organization tasked with protecting and preserving the Wild Mustangs and their habitat. People are invited to become members to help support our mission. They can learn about the Mustangs at our education center, and go out on a ‘trip of a lifetime’ to experience the wild horses in their natural world,” says Linda Adkins, executive director of the fund. “The money we bring in goes directly to the horses’ care. It covers food and veterinary costs for horses at the farm, plus herd management and operational expenses for the horses on the beach.”

Horse advocates face a never-ending battle against the elements, development and public policy to continue to protect North Carolina’s wild horses, according to the Corolla and Shackleford preservation groups. In efforts to preserve the horses, offsite breeding programs have been approved as well as adoption programs.

Raymond is a tenacious mule living among the Currituck Banks herd—the only one of his kind.

“The public can help us further our mission in a number of ways, most importantly by respecting the wild nature of these horses,” explains Margaret Poindexter, president and chairperson of the Foundation for Shackleford Horses, Inc. “While they are acclimated to human visitors on Shackleford, they are not domesticated horses. Folks need to enjoy them from a reasonable distance, at least 50 feet away at all times. If the horses approach, folks need to back up. And if the horses stop what they’re doing, folks have gotten too close, even if they are more than 50 feet away.”

“In particular, mares and their foals need time to graze, drink, rest, and bond with one another,” Margaret continues. “The other thing folks can do is keep their pets leashed at all times. Not only is it a violation of federal law to allow your dog off leash in the National Seashore, it puts the horses and your dog at risk of serious injury or even death. Finally, we would ask that folks be mindful of protecting the natural environment that the horses call home. There are no trash cans on Shackleford Banks. Take everything home with you that you bring over.”

Whatever herd you choose to observe, take binoculars or a camera with a telephoto lens so you can abide by the distance rules and enjoy watching these beautiful wild horses in their natural habitat.

There are several tours here that take visitors out to see the wild horses.

Here the horses are not free-roaming, but are fenced in and managed by the National Park Service. There is an observation tower where people can view the horses.

These horses can be spotted from the waterfront in downtown Beaufort.

This island is accessed by ferry, although the horses live in the marshes and can be difficult to view. A public stable offers trail rides to find them.

To see the horses on Shackleford Banks requires a ferry ride to the island and hiring a guide who will direct you to an area where you can view the horses.