A Meditation on the Speckled Trout 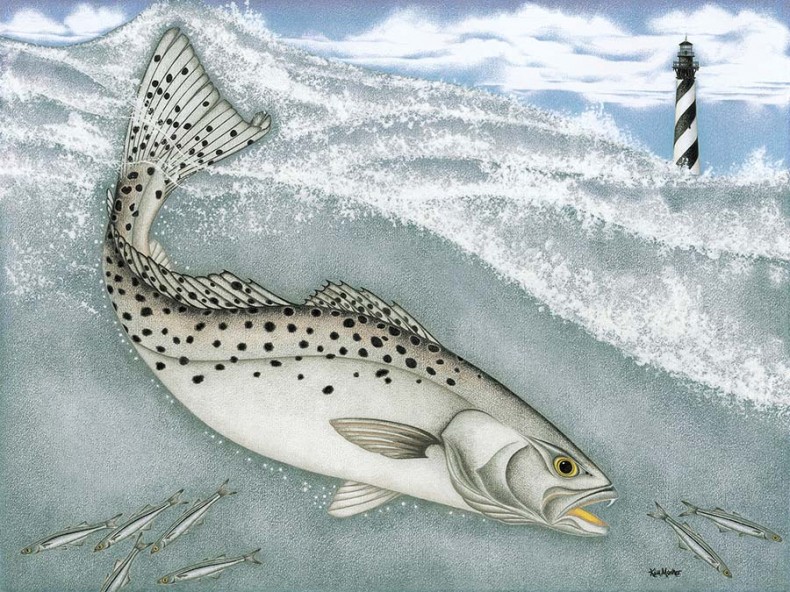 Kevin McCabe’s wife, artist Kim Mosher, has artist’s proofs of her colored pencil work “Speck Attack.” They are available for $30 each, among other art, from kimmosherdesigns.com

In the mid-1960s, my father gave me two of the best gifts I would ever receive. One was a light-action, seven-foot rod. The second was my first trip fishing for speckled trout in the rough autumn surf. I vividly remember casting a red-headed Mirro Lure into the rolling waves at Onslow Beach. A swift current carried my lure along with all the anticipation a 10- year-old kid could contain. The ocean bottom there was not sand, surprisingly, but a slippery peat with scattered cypress stumps from long ago. The same mudflat would produce 10,000-year-old arrowheads at low tide. Then WHAM! Out of the cold white water came a large shaking yellow- mouth with two fangs. Both the fish and I were hooked. Nearly 50 years have come and gone, but the magic from that day is branded deep within my heart. I believe I am not alone when it comes to the mystique of speckled trout fishing in the evanescent surf.

Find out about Trout

Speckled trout live in North Carolina’s estuarine rivers and sounds and in the surf off our barrier islands. They are sensitive to freezing temperatures, so fish north of Virginia migrate here for the winter, according to the N.C. Division of Marine Fisheries. Also known as spotted seatrout, speck and spotted weakfish, they are members of the drum family (Sciaenidae), not the trout family (Salmonidae). Popular among recreational fishermen, they average 15 to 25 inches and 2 to 4 pounds, but can grow as large as 40 inches and 12 pounds. They feed on shrimp, crabs and mullet.

Whether it's casting a fly into a secret spot in a mountain stream or fishing the perfect slough on a lonely beach, trout fishing has an amazing effect on the dedicated angler. The solitude and quietness are priceless. For many of us, the reward is in the search. Years ago I fished with a retired judge who told me, "You don't need trout to trout fish." It took a while, but I thoroughly understand what that means. Trout fishing has been a form of meditation for centuries. Many books have tried to convey the magic behind it. Years of experience are like the rings in a tree. Keep them deep inside if you want to be alone. Some fishermen are willing to cut corners to catch trout. They may not know or care about this sacred pastime that has been passed down for generations. The speckled trout history throughout eastern North Carolina is very interesting to say the least.

Stories and etiquette from back in The Day

In the 1960s and 1970s there was a cast of characters I had the privilege to fish with: Gunner Charlie, Big John, Curtis Gray, and the Boogerman, to name a few. Other legendary names are out there, but they all fished way before my time. Sadly, many stories and names of this wonderful heritage are fading fast. Some of the older trout men told stories that were quite amazing. One particular story I always enjoyed was from an ancient angler. His grandfather was a slave and obviously a great trout man. He would go down to the beach with a long cane pole, twisted oiled line, and a handmade lure. He would lay the lure on the beach and walk towards his "hole." (A knowledgeable trout man is usually casting in a small 10-foot circle.) After a throwing the lure out, he would walk backward, slowly jigging it through the trough. I like to describe it like teasing a cat with string. After picking a few trout out of each hole, he would return home and was allowed a portion of the day's bounty.

Many old rules of trout etiquette have gone out with the tide these days. The true trout men in the old days used only lures or single handmade jigs. Colors and weights were adjusted to fit the conditions of the day. Live baits, double jigs, and snagging were highly frowned upon among the most dedicated elders and respected trout men. They said it was like cheating, and they would literally run you down the beach using harsh language. I found that out the hard way in my early years after being scorned for using live minnows. Another general rule was never walk into an angler's trout hole without asking for permission first. That act could also get you into lots of trouble. Real trout men are more interested in locating the fish than actually catching them. I feel the same way, but I still take a couple home to eat.

The remains of legendary fishing places

Historic trout fishing spots are also disappearing. Anyone who has ever fished for speckled trout in North Carolina has heard fabulous stories about New River Inlet, the old 172 Bridge in Sneads Ferry, the Buxton Jetties and the old fishing piers. Names like The Scotch Bonnet, Paradise Pier and Ocean City Pier have now become part of hurricane history, and all that remains beside them are whispers of epic trout fishing days on cold autumn mornings. Thankfully, there are still a few piers standing where the fine tradition continues. Many old-timers remember the ridge of giant oak trees that stood on North Topsail Island at New River Inlet. During the peak fall trout run, the tree line and bank would be filled with anglers casting on the outgoing tide. I spent many days under those oaks catching countless numbers of speckled trout as a young man. It was rumored that lots of other treasures came from under those trees too. They were the same trees that Blackbeard hid behind. By the time you saw his top sails, he had you in his sights. Like the piers, the oaks were washed away by storms and time. 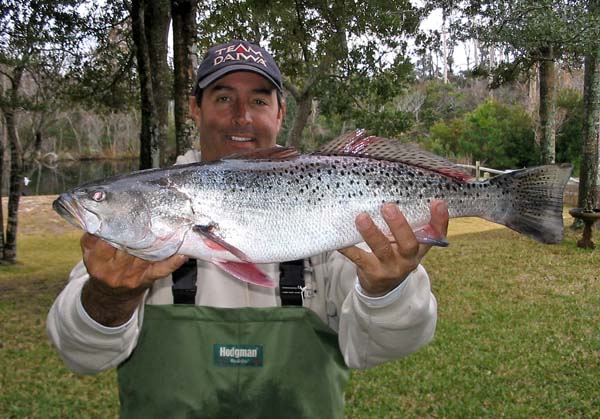 Looking back over the years is a natural instinct of all humans. With that said, I am very thankful that my father took the time to take me trout fishing one cold autumn day. It changed my life forever. The complete understanding of speckled trout and the nature around them has become a personal study. Because of one fishing trip nearly five decades ago, I have learned more about the ocean, the weather and shoreline dynamics than any institute of higher learning could ever teach. From the stars above, to what's buried in the sand below my feet, I see a clear picture that has made my life more rewarding. I can honestly say ''thank you'' to one speckled trout I let go on a cold day a long time ago.

Kevin McCabe has been fishing and studying speckled trout in the surf for 47 years. He says that living on Hatteras Island next to the Cape Hatteras National Seashore provides him miles of beach to look for these fish through the fall and winter. The quiet winter months, he says, also provide time for writing that has become “a part-time hobby and a full-time ambition.”