NCYCC youth learn to be successful on and off the trail

A horse trail in the Uwharrie National Forest, southwest of Asheboro, winds over the region’s gentle hills through woodlands that have been well-loved for centuries. American Indians traded prized stone from nearby quarries, which has been found as far away as Maine. In the 1800s, gold mining was big business. And last summer, it was abuzz with a group of nine youths dedicated to getting it in top form. 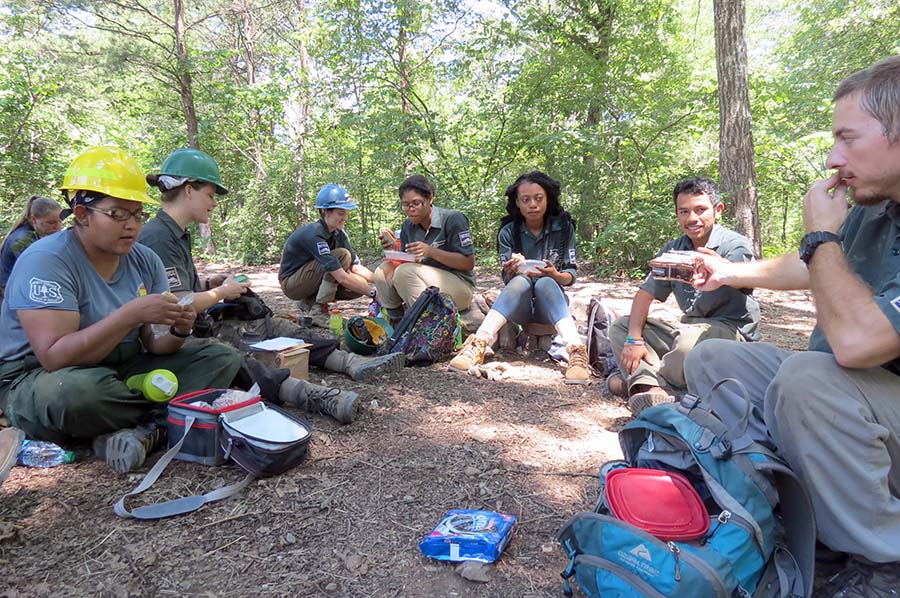 “The forest service wouldn’t be able to maintain trails without volunteers,” says National Forest Service district recreation staff supervisor Terry Stevens Savery. “There are several volunteer groups in the area that have adopted trails, but the YCC has been very helpful in getting a handle on a backlog of maintenance. Otherwise, it just wouldn’t get done.”

Since the program was created in 2013, NCYCC crews have been making a lasting impact across the state. The organization came about as a partnership between the Conservation Trust for North Carolina (sponsored in part by North Carolina’s Electric Cooperatives) and the Vermont Youth Conservation Corps, patterned after the successful and decades-old Vermont program. Crews are made up of youth (ages 16 to 18) and young adults (ages 18 to 24), who put in hundreds of hours of hard work to improve and expand access to North Carolina’s protected natural areas.

The crews are modeled after the Civilian Conservation Corps — a program that employed thousands in the state in the 1930s and contributed to lasting resources like the Blue Ridge Parkway.

“Similar to CCC, there are so many win-wins with this program,” says NCYCC project director Jan Pender. “You’re transforming people’s lives at a critical age, when they’re exploring who they are and who they want to be. At the same time, you’re providing valuable work at a reduced cost to federal and state agencies and communities across North Carolina.” 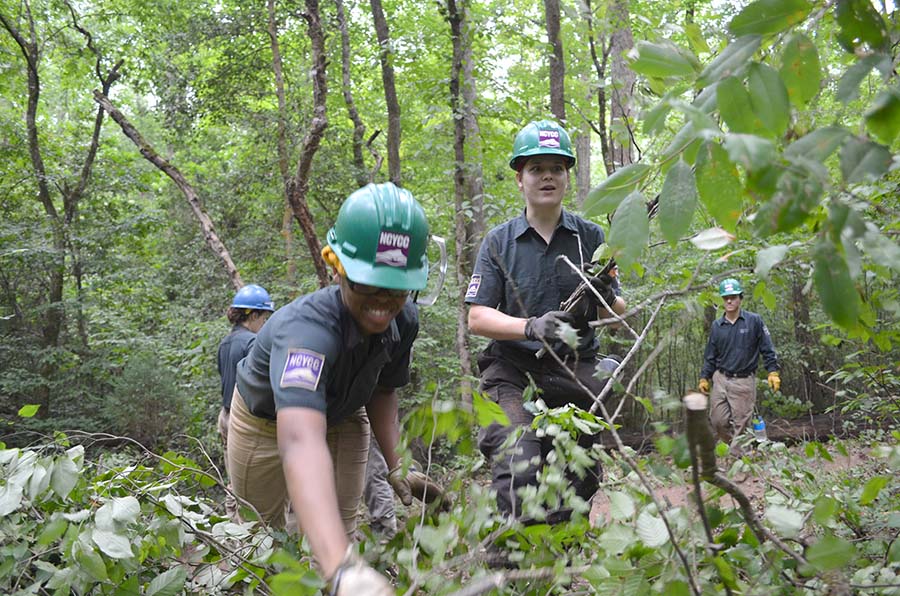 From June to August last summer, five crews logged a cumulative 28 weeks doing work across North Carolina. Crews work seven-hour days, five days a week for up to seven-week stretches on projects, and the results really add up.
The project list for 2016 alone stretches on for pages. Completed work includes things like installed play areas, bike racks, educational kiosks and signs; painted buildings and gates; the removal of acre upon acre of invasive plant species (one crew removed 36 acres of Autumn olive); the construction or maintenance of miles of trail; and other jobs that just wouldn’t get done otherwise. One crew removed half a ton of rusty metal from a historic ruin in Orange County.

For crew members, the benefits go beyond an honest day’s work. Some in the program are identified “Opportunity Youth,” defined as people between the ages of 16 and 24 who are neither in school nor working, and their involvement in NCYCC is supported through a national program called the Opportunity Youth Service Initiative.

“They’re sometimes called disconnected youth — the longer they’re out of school or out of a job, the less likely they are to start a successful career,” Pender says. “Youth service corps are particularly successful at getting young adults back into the workforce.” 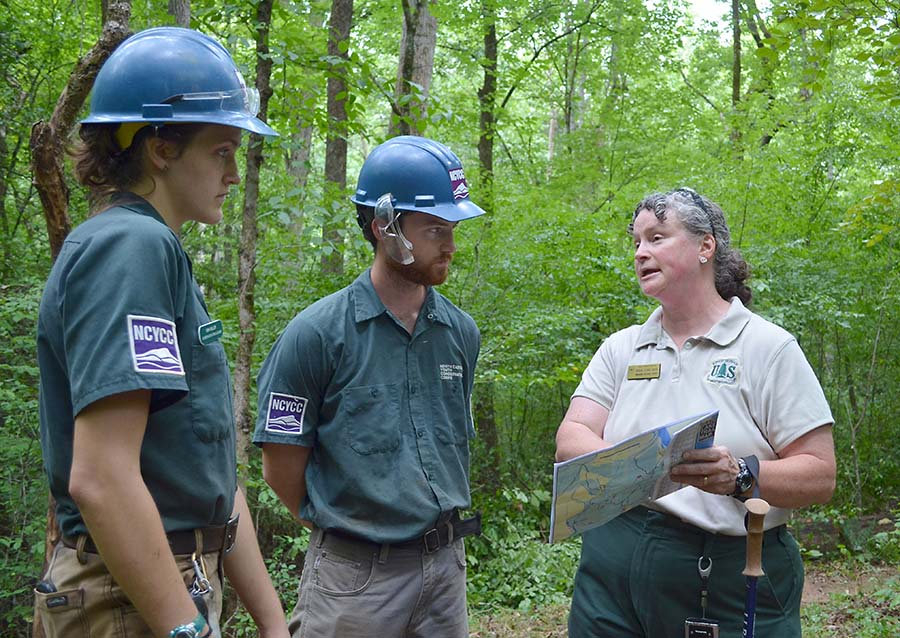 A pilot project put on by the Corporation for National and Community Service found that, following three-months of work on a project crew, disconnected youth felt a greater sense of responsibility for making positive changes in their community (80 percent), said they intended to pursue education beyond high school (75 percent), and had a clearer sense of their career goals (65 percent). Seventy-one percent said the experience made them want to pursue a career helping others or improving the community.

Another benefit for crew members is social. Working closely with others in nature, away from a 24-hour social media cycle, can have a lasting impact, Pender explains.

“I see remarkable transformations in the kids. They have a different perspective on life after they go through this program,” she says. “Being out in nature levels the playing field. Everyone is in a uniform, working on the same type of project. You’re connecting everyday with the environment and the work — it just makes the social environment different for kids. And many of them find a level of social acceptance that they’ve never experienced before.”

Sitting around a trail junction during a lunch break, the Uwharrie National Forest crew comes alive talking about the unexpected parts of their time in the woods.

“I expected the comradery and what we would get out of the lesson plan, but I did not expect so much kindness from the community,” says Sam Shantry, a 2016 crew leader from Greensboro.

Want to hit the
trail next summer?

NCYCC is accepting applications for 2017 trail crews. Positions are located in North Carolina and members will be camping in tents for the duration of their term. If you are interested in applying for a 2017 NCYCC position, please review information about available positions in the “Connect” section of ctnc.org, and email recruitment@vycc.org with the following information:

During one seven-day stretch, the crew cooked only three times. Locals kept their plates full by bringing dishes like spaghetti, or in one case, ordering seven pizzas for the group. 4B Farm, an equestrian campground adjacent to the national forest, offered up its air-conditioned cabins to the crew to give them a break from tent life in the August heat and humidity.

One of the team members, Urcia Matsiona from Raleigh, is back for a third year with NCYCC. She was initially drawn to the program because of the opportunity to work outdoors, but building leadership skills is what keeps bringing her back.

“I’m learning a lot about leadership,” she says. “I am a business management student, so I do want to own a business one day, but I also like working on trails. I don’t know how I’m going to combine both of them — I’m still figuring that out.”

That sentiment is echoed by several of her fellow crew members. Some are pursuing careers in related fields, like conservation and wildlife management, but many are finding benefits in the program that go beyond knowledge of the outdoors.

“The program is very much about personal responsibility. Everybody has a role, and they have to fulfil that role,” Shantry says. “It makes these guys more responsible, and creates a sense of maturity, development and profession know-how that will serve them in future careers — not just building trails or cutting down trees.”