Combined, the words liver and mush do not sound particularly appealing, especially for those people new to North Carolina's livermush region. For those who dare to try it and like it, or those like me who were raised on it, the mere mention of this old-timey delicacy draws an enthusiastic response.

Livermush is a mixture of ground hog meat and liver, spices and cornmeal. It probably came south to the North Carolina mountains and piedmont with German settlers from Pennsylvania. Similar to the more familiar scrapple, generations of families have been making livermush along with their homemade sausage and smoked hams.

Sliced and fried alongside eggs for breakfast, or as the centerpiece of a sandwich with mayonnaise or mustard, you can find livermush on the menu in western and mid-North Carolina, a little of South Carolina, and parts of Virginia. Suppliers are Mack's Livermush and Meats in Shelby, Jenkins Foods in Shelby, Neese's Country Sausage in Greensboro, and Hunter's in Marion.

Roy and Gurthie Hunter started Hunter's Livermush in 1955 for the customers of a local, independent grocer. They perfected the recipe through trial and error, and within a few years the couple was making and distributing their own brand, with children Jerry, Carolyn, Louise, and Phyllis, providing a lot of the elbow grease. 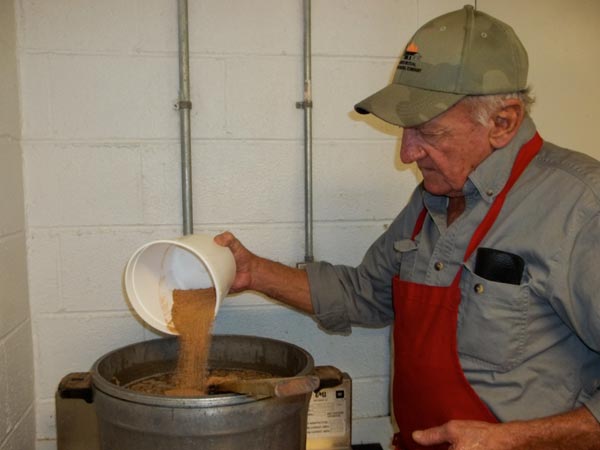 Fitzhugh McMurry of Fallston, Cleveland County, uses a family recipe and years of experience to turn pork scraps and liver into livermush, a regional delicacy.

"I remember that we cut the livermush in blocks and wrapped them in plastic," eldest daughter Carolyn Hunter Johnson told me. "We sealed the plastic on a clothes iron turned upside down. My job was to wrap the blocks in paper."

Today, Hunter's Livermush produces 20,000 pounds every week for customers of stores in five counties. Two mornings a week it sells directly to the public at its plant on Poteat Road in Marion.

On a much smaller scale, Fitzhugh McMurry, along with his cousin, Joe Workman, make about 30 pounds of livermush every week in the back of his country store. McMurry Store and Farms is on NC 18 in Cleveland County, at the only stoplight in Fallston. McMurry keeps enough fresh livermush, sausage, bacon, hams and sidemeat in his meat case to satisfy a swarm of regulars and any others willing to drive to the country for a slice of heaven.

McMurry invited me into the back of his store where he already had 25 pounds of lean, meaty shoulder scraps and liver tenderized in a tall stewpot. While I watched, he ground the meat and returned it with the hot broth to the stove to get ready for the second step in the process: adding the cornmeal and spices to make a savory, mouthwatering mixture.

Like many of his generation, McMurry was born at a time when many families still grew and preserved vegetables and raised all the meat for the family table. The recipe is his mother's, but like many great country cooks, he doesn't need any measuring cups. He used his years of experience to gauge the right amounts of red pepper, black pepper, sage, salt and brown sugar; no two batches ever exactly alike. Using a long wooden paddle, he slowly worked in white cornmeal a small handful at a time.

"Listen to the bubbles," he said. "When they start talking back to you, it's ready. Hear it?" Sure enough, the bubbles began to hiss and pop with steam and the mixture began to pull away from the side of the pot. He spooned out a taste for me, and poured the rest into a large rectangular pan for cooling and slicing.

All Livermush, All Day

The next day my husband volunteered to drive the 30 minutes back over to Mr. McMurry's store to buy a large block of that livermush. It fried to a crunchy golden brown and disappeared quickly along with the scrambled eggs, hash brown casserole, and biscuits and molasses I served for supper that night. For us, that's hog heaven.