A holiday tradition in pies, pralines and pieces 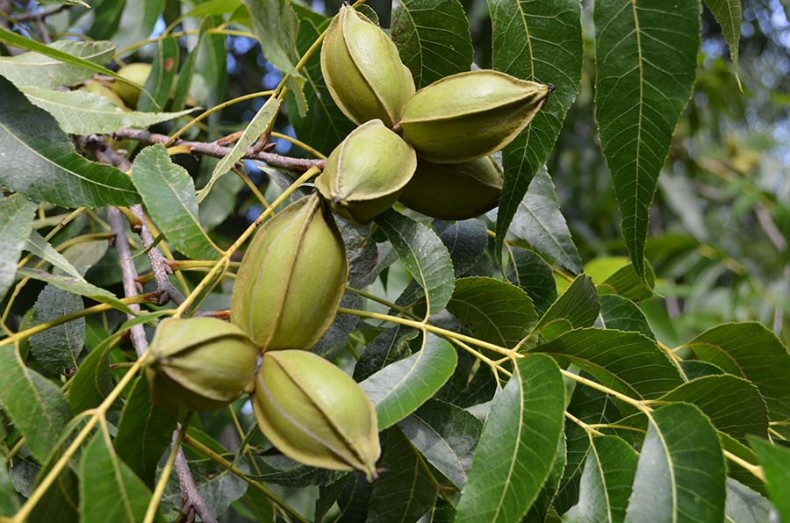 A single acre of mature, well-managed pecan trees can yield up to 1,500 pounds of unshelled pecans.

You could argue over stuffing versus dressing or cranberry conserve versus jellied sauce from a can. It seems that everyone is set to defend and demand his or her holiday food favorites. What they don’t seem to squabble over is an undying devotion to pecan pie and its traditional place at the table.

Originating in central and eastern North America and the river valleys of Mexico, pecans historically have been favored because they’re easy to crack and have a great taste when eaten by the handful or added to recipes.

They’ve been prized and marketed since the 1600s, but have seen a booming increase in popularity over the last three decades.

“Not so long ago, most families had a few backyard trees and used their harvest for holiday baking,” said Tim Haithcock, owner of Indian Springs Pecans and Farm in Goldsboro, and president of the North Carolina Pecan Growers Association. “If they had enough to sell, they used the money to pay their taxes.”

Go Nuts and Celebrate the Harvest!

Today, North Carolina has grown far beyond the backyard pecan tree to create an industry that produces, in an on-crop year, 3 million to 5 million pounds annually. Our state consistently ranks among the top states in the nation for pecan production with Georgia topping the list.

“New varieties developed by the USDA’s Pecan Breeding Program at Texas A&M University may be well suited for North Carolina’s growing conditions and have some disease tolerance and a shorter maturation time,” said Michael L. Parker of the Department of Horticultural Science at N.C. State University. Most growers are east of I-95 and in the southern piedmont region, but pecan trees thrive all over the state.

Varieties adapted for planting in North Carolina require 200 frost-free days from pollination to maturity. According to the North Carolina Pecan Growers Association, well-managed, mature pecan trees can produce up to 1,500 pounds per acre. Prices average $1 a pound for in-shell pecans.

And while most of North Carolina’s pecan crop is consumed right here, demand for this popular nut is spreading worldwide.

“China has developed a taste for pecans,” said Parker. “I have been told that they soak them in soy sauce and serve them as a delicacy.” In 2013, China bought more than 50 percent of the total U.S. production, and prices for these healthy, tasty nuts rose as demand increased.

“North Carolina has a great environment for growing pecans, and it’s a crop that has a great future,” said Haithcock. “I think they’re going to grow in prominence as a crop to export.”

For a sweet way to dress up your pecans, try this Pecan Pralines recipe from Pecans, a Savor the South cookbook by Kathleen Purvis.