On the Hunt for Edible Plants

One Saturday in April, foraging expert Ellen Zachos and her friend, Mark Hardy, lead a group of participants on a hike through meadows, stream sides and forests at the Betsy-Jeff Penn 4-H Educational Center outside Reidsville. They are on the hunt for edible plants. 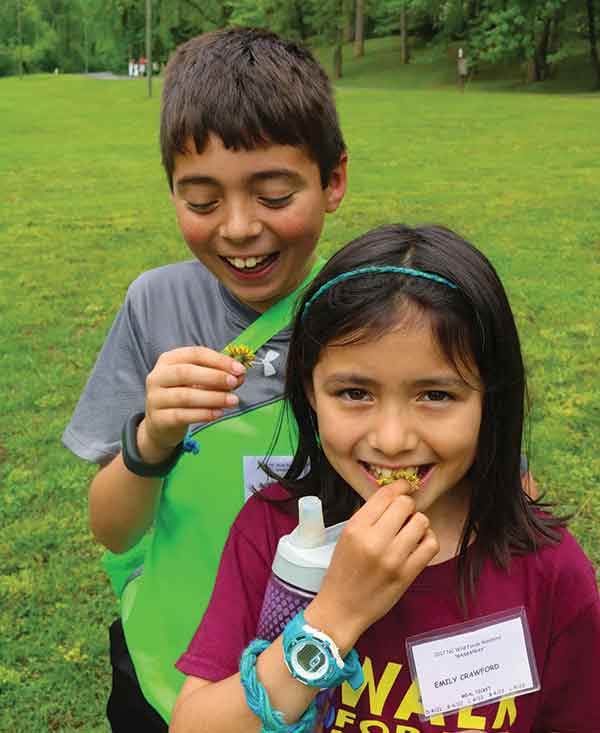 Emily Crawford and her brother Gio were among the youngest foragers at Wild Foods Weekend. Emily started a wild foods club at her school.

Zachos reaches out and brushes the new growth at the tips of a pine tree’s branches.

“Warm the pine needles in olive oil and it gives a lemony flavor to the olive oil,” she says. “Use it to sauté wild greens.” 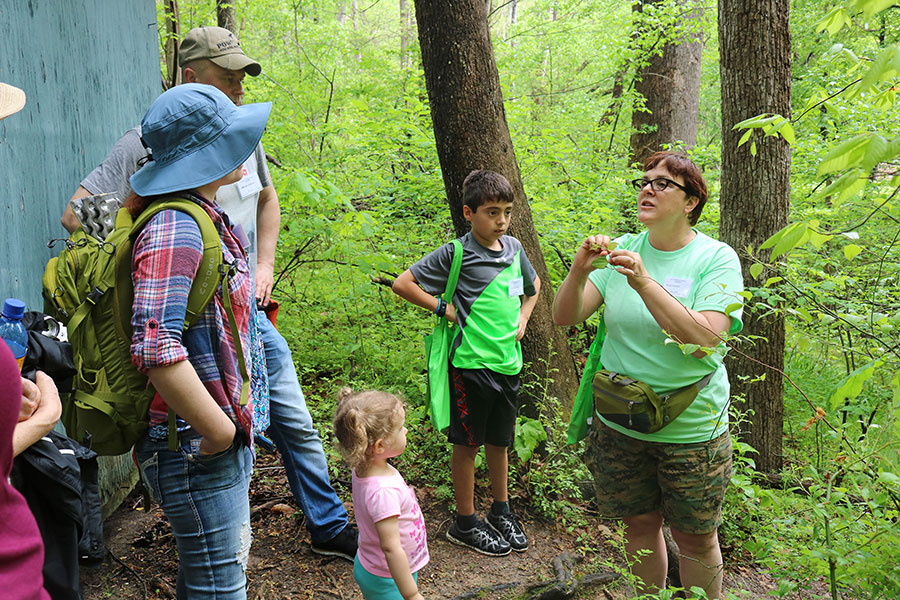 Ellen Zachos (right) leads foragers of all ages on a hike at Wild Foods Weekend.

In a matter of a few minutes, the two leaders have pointed out four other different edible plants, illustrating the abundant foods and flavors growing all around us: wood sorrel, daylilies (“edible superstars”), a pawpaw tree and May Apples. 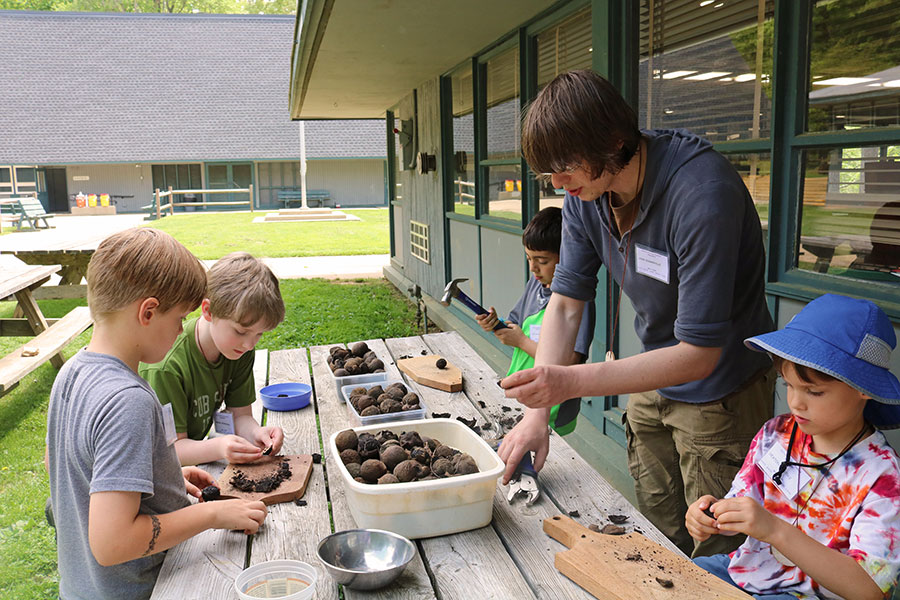 “If you ever find a wild May Apple fruit, grab it because it’s delicious,” says Zachos. “It’s usually the size of a hen’s egg.” She cautions that every part of the umbrella-like plant is poisonous — even the green, unripe fruit — except for the ripened fruit, which appears in July.

Hardy chimes in: “The May apple has a flavor like the love child of the most celestial apple and a pear.”

The hike is a part of the North Carolina Wild Foods Weekend, which has been bringing together foraging enthusiasts, both experienced and novices from as many as 13 states, for 43 years. It is held either the third or fourth weekend every April (adjustments are made to avoid Easter weekend).

“It has opened a whole new world for me,” says Carolyn Quinn, co-coordinator of the event, who lives in Duplin County and is a member of the Four County EMC. Quinn is eager to share with others the wonders of what is available if they know where to look. “People can live off the land. There are things they can go out and eat [with proper preparation] and sustain themselves if they have to.” She then ticks off a list for starters: “fiddlehead ferns, poke, curly dock, dandelions, wild mustard, chickweed greens, wild cherry, elderberries, cattails, bamboo shoots, wild purslane.”

During the hike, Zachos asks the 15 or so people in her group if anyone sees any other edibles. Eight-year-old Emily Crawford quickly points out a wild violet, much to the delight of Zachos, who shares that violet foliage has a mild flavor, is good in salads and balances out the sharper taste of wild mustard greens, while the flowers make a lovely, edible garnish.

Emily and her 10-year-old brother, Gio, are two of the youngest participants at the event, their interest in the plant world already ignited by next door neighbor Emanuel May, a former horticulture teacher who taught 30 years in Wake County. May is the event’s co-coordinator with Quinn.

“We wanted to do this with the kids so they could get it in their blood,” says Emily and Gio’s mother, Mary Crawford. “Wild foods are all around us, and can be used as both nourishment and for their healing properties. We are trying to teach them to know their ingredients and where they come from so they can make better decisions throughout their lives.”

A two-hour hike during the Wild Foods Weekend reveals dozens of plants that are edible and within easy access to most of North Carolina. But as the experts point out, foraging is not the time to experiment. Be overly cautious with edible wild foods and follow these tips:

While the focus of the hikes at Wild Foods Weekend is on edible plants, the group also benefits from wild game, which was killed in season, frozen and then contributed to the weekend by various participants.

The meat guru of the group is Bill Faust, and rightfully so. Faust owns and operates Bland’s BBQ in Warsaw. He has been involved with the weekend since its beginning. Close to 50 years ago, Faust took a course with Euell Gibbons, who rose to fame in the 1960s and early 1970s for his back-to-nature expertise, including his book, "Stalking the Wild Asparagus."

Gibbons went on to make guest appearances on The Tonight Show with Johnny Carson and made a series of Grape Nuts commercials.

Faust took the course to become better educated in leading his Boy Scout troop on how to survive on food found in nature. He was hooked. “I was so amazed that I could go out in the woods and gather up bushels of stuff to eat,” he says.

Along with his expertise, Faust contributes frozen rattlesnake to the weekend. Early on Saturday, he winds the four feet or so length of the snake into a big pot of water where it will boil and simmer for close to two hours. After it cools, participants will skin and debone it (yes, snakes have bones) and remove the vertebrae, which is used for jewelry.

The meat will be the star in Faust’s popular rattlesnake salad (think chicken salad, but with rattlesnake). Other meat dishes feature venison, elk, rabbit, beaver and quail. 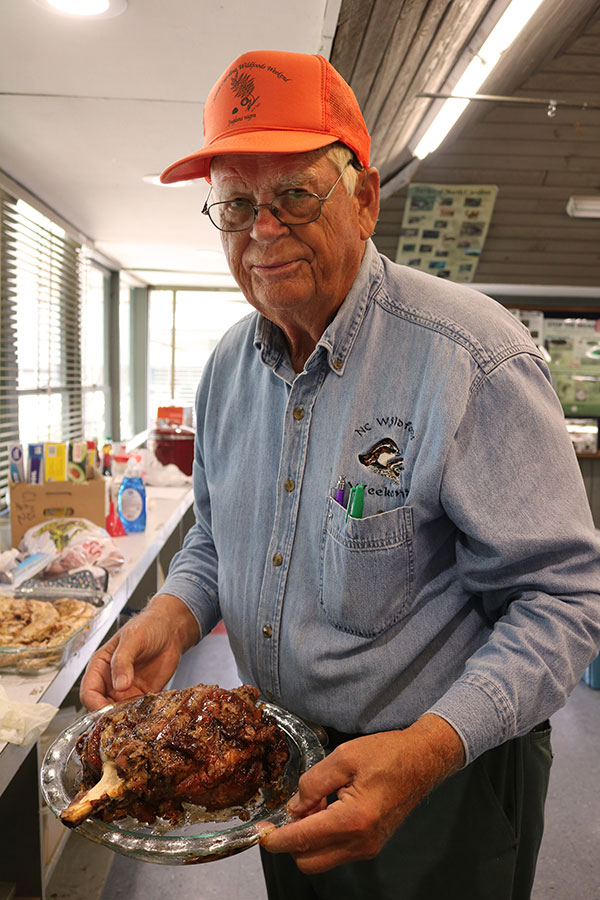 “Back when we started it was ‘survival food,’ and now it’s gourmet,” says Faust.

Ed Kessler coordinated the Wild Foods Weekend event for 15 years. He cites the camaraderie and the chance to learn as reasons to attend the event, both of which have been calling John Sommerville back year after year.

Sommerville is one of the youngest hike leaders at 28 and has been attending Wild Foods Weekend since he was 15.

“I fell in love with it,” he says. “I like everything about it — the amount of knowledge available to you in regards to what plant is medicinal, what is edible. There is a big pool of knowledge and new ideas. You learn new things about things you thought you already knew. I got taken under the wing. I felt included and I was given the opportunity to provide leadership.”

“I look forward to it more than my birthday and Christmas,” he adds. “It’s the most important weekend of my year.”

The 50 Anniversary National Wildfoods will be held in September 15–17, 2017 at the North Bend State Park in Cairo, WV.