On the Hunt for Old Timey Apples 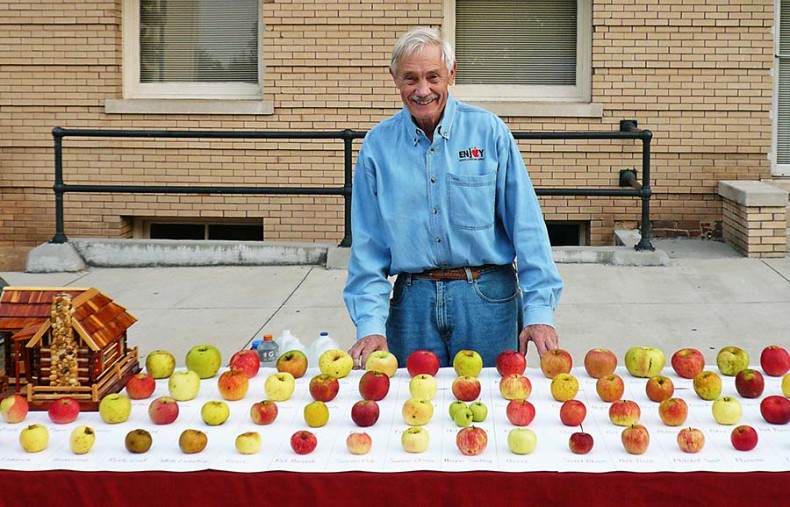 Tom Brown is on a mission to track down as many heirloom and lost apple varieties as he can. Most of his leads come from talking to people at regional festivals and fairs. His display is made of apples from his own preservation orchard.

That was 50 years ago and that tree is gone, like so many others of the memories shared in the shade of an apple tree. But Tom Brown of Clemmons is preserving memories by finding and preserving the heirloom apple trees once thought to be lost to time.

We’re not talking about Red Delicious or Granny Smith here. The apples he finds have names like Big Andy, Greasy Skin, Jellyflower and Mongolean.

Brown and his wife, Merrikay, have taken more long day trips than they can count in the search for hidden orchards and the treasures they hold.

“It helps to have an understanding wife and an all-wheel-drive car,” Brown says.

He found his first apple in 1999, a Yellow Potts he located in Iredell County. At that moment, his curiosity turned into a unique hobby that has put hundreds of thousands of miles on two faithful Subarus.

“Everybody said I ought to go to Wilkes County, and it turned out to be the mother lode of old apples,” Brown says. “I had several elderly residents tell me that their parents or grandparents took pride in having apples that were different from their neighbors. In Wilkes County, you would go to a house and they would have four apple trees and they would all be different and would all be rare.”

One clue led to another, and he eventually found 300 varieties associated with just that one county.

“It’s an extreme race against time to find these apples,” Brown says. He often gets his clues from people who point him toward someone with an unusual apple in their orchard. “Many of the people who have these varieties are elderly, so if you hear of an apple, you need to check it out quickly.”

Check out these “apple-icious” recipes:

Brown says that he gets lots of tips by attending regional festivals and talking face to face with people who lead him to an unusual variety. He is a regular fixture at the Lincoln County Apple Festival in September, displaying a wide variety of apple types hoping to find yet another clue, which he follows up personally.

“In some places, it really helps if a local can take you around,” he says. “Sometimes people will open up more readily if you’re with a local. Everyone likes apples, so if they’re a sinner or a saint or a Republican or a Democrat, they treat me nice.”

Brown doesn’t just find the apples. He’s passionate about keeping the old varieties going by finding the original tree and taking his own cuttings. He grafts his findings onto purchased rootstock or onto an existing tree. His own preservation orchard numbers more than 1,000 trees along with memories they hold.

“I know it’s an unusual hobby, but it’s fun and rewarding,” Brown says. “I’ve met so many people along the way, and it keeps me young.”

Learn more about Brown’s work and view his recent finds and the stories he’s collected along the way at applesearch.org.