Still natural after all these years 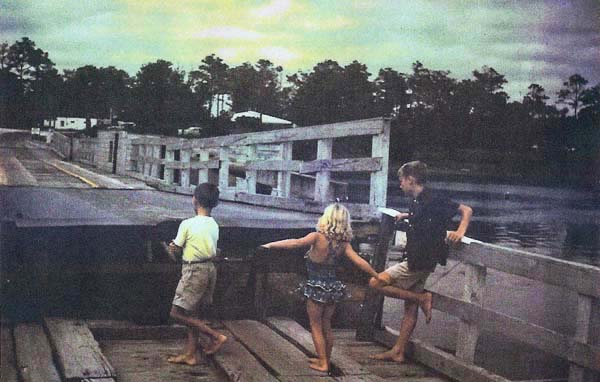 Children play on the bridge Mannon Gore fashioned from a surplus WWII pontoon barge in 1958. (From the Edward Gore, Sr. Collection) 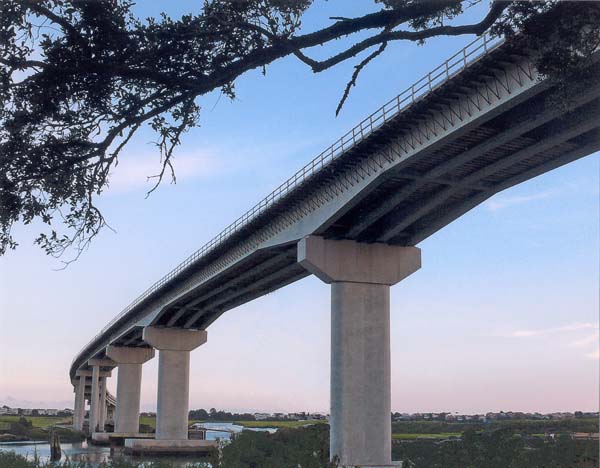 Irene Dowdy won first place in the 2010 Sunset at Sunset Photo Contest with this picture of the new Mannon C. Gore Bridge.

Even the sand seems to like Sunset Beach. For years, it's been coming in from offshore, adding to the already wide expanse of natural beach on the three-mile-long island near the South Carolina state line. Unlike other North Carolina beach communities, Sunset has never had to resort to pumping sand onto the beach.

"If I knew why, I'd be a genius," says coastal authority Orrin Pilkey of Duke University. What he does know, he says, is that "it's a marvelous beach."

Another reason the island is marvelous is that because of its alignment on earth — roughly northeast to southwest — you can see sunsets over the ocean.

Some 15,000 Sunset Beach fans would agree it's a marvelous place. They're the 3,600 year-round residents of the town of Sunset Beach, 100 of them on the island and the rest on the mainland, plus the nearly 12,000 vacationers that swell the summertime population. Townspeople think so much of Sunset, which celebrates its 50th anniversary this year, that they've held a series of anniversary parties, put together an exhibit of historic photographs at Ingram Planetarium, and are collecting mementoes for a time capsule to be sealed in March 2014.

It's still that way, says town council member Karen Joseph, even though "It's a small town whose population has doubled in a very short period of time."

The most impressive thing about Sunset may be the accommodation it makes to the ever-changing ocean, Klein says. Years of sand build-up have created a 200-foot stretch of land between homes on the island's main street and the dune line, yet the extra sand has never been built on.

"That is so unusual," says Pilkey.

The reason, says Gore, is prohibitive deed restrictions put in place by his father that are now part of zoning law.

To get people over the Inland Waterway, founder Gore built a pontoon bridge beside his home. "People would drive up and honk their horns," and he'd pull the cables that operated the bridge, says Ann Bokelman of the Old Bridge Preservation Society.

Various improved versions of the old one-lane bridge lasted until 2010, when the state built a soaring stationary structure. The old 110-foot span and the tender house were moved by tugboat and crane to the mainland, where the Old Bridge Preservation Society is turning them into a museum. 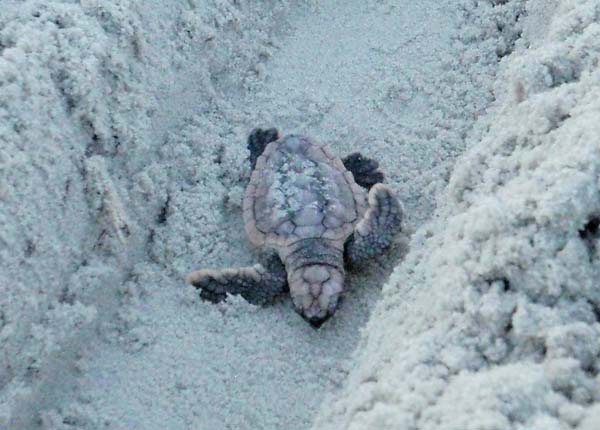 A baby loggerhead turtle crawls from its nest to the ocean down a path dug by the Sunset Beach Turtle Patrol. (Photo by Jim Barber)

Because its sand has never been artificially replaced, Pilkey says, the island beach is "a rich ecosystem. So full of critters — mole crabs, coquinas."

Up to 30 loggerhead turtles crawl ashore each summer to nest, says Carmel Zetts, coordinator for the 65-member Sunset Beach Turtle Patrol. Members check nests beginning at 5 a.m. and, when hatching occurs, they escort the hatchlings to the ocean.

Farther down the beach, on what was separate Bird Island before shifting sands filled in an intervening inlet, more dunes and marsh make up the 1,400-acre, state-owned Bird Island Coastal Reserve.

"It's an incredible area to go kayaking in, so many tidal creeks. Just drift past the herons and the egrets and the willets and they'll just be sitting in the grass looking at you," says Jim Barber, coordinator of the Bird Island Stewards, who leads birding tours.

Between the natural wonders — "The sunsets are absolutely indescribably beautiful," says Edward Gore— and the small-town atmosphere, Sunset Beach is "a wonderful place to live," concludes council member Karen Joseph. 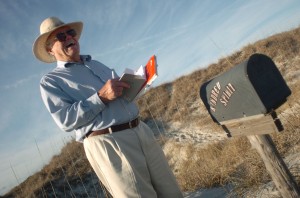 The peaceful Bird Island dunes off Sunset Beach inspire contemplation, and many visitors are moved to pour out their hearts in a notebook found in an isolated mailbox there.

"It's an inspiring place when you get down there," says Frank Nesmith, 86, who with a visiting vacationer, the late Claudia Sailor of Fayetteville, put up the mailbox that included the first notebook in the 1970s.

Nesmith forwarded the hundreds of filled notebooks to Sailor, until her death in January. He continues to replace them, but now the filled notebooks will go to the archives at UNC-Wilmington.

"Some of them will bring tears to your eye," he says. "A bunch of cousins wrote that their granddaddy had a house down here at Sunset Beach. One of the things they did when they came down was go to the mailbox. One Thanksgiving he was not with them anymore. Even had a special service for him down there."

Electric service on the island of Sunset Beach is provided by Brunswick EMC, the member-owned Touchstone Energy cooperative serving Brunswick and Columbus counties. In recent years, Brunswick EMC has moved all distribution and individual service lines on the island from overhead to underground. This conversion was made possible through a Federal Emergency Management Agency (FEMA) grant of more than $6.25 million obtained by BEMC to mitigate electric system damage from hurricanes on the barrier islands of Brunswick County.

Underground lines are protected from both wind damage and the corrosive effects of salt air; this increases system reliability and greatly reduces the volume of power outages from major storms.

Carolina Country contributing writer Hannah Miller also believes Sunset Beach is marvelous. “Sunset Beach, especially at sunset, is such an inviting place. I used to go there even when I was staying someplace else, just to see the dunes and the black skimmers and to write in the Kindred Spirits notebook.”