Our history on earth is being reshaped by everyday acts of sustainability. If reusing, recycling and reducing waste are ordinary ways of sustaining our world, then “upcycling” is an extraordinary way of bringing value to otherwise discarded items. Oliver Schneider, a German/American/Lumbee blacksmith, is a self-taught upcycling master, turning old scrap into matchless cutlery.

“Knives tell the history of the people who make them,” Schneider says, holding a knife made from a railroad spike. “Knife-making is about putting your personality into your creation.”

Walking through his Robeson county home, the Lumbee River EMC member modestly points out a gorgeous knife display on the kitchen countertop that holds his kitchen spike-knife collection, including a fork and a spoon. He made the display piece and other furniture out of a fallen cedar tree in his yard. 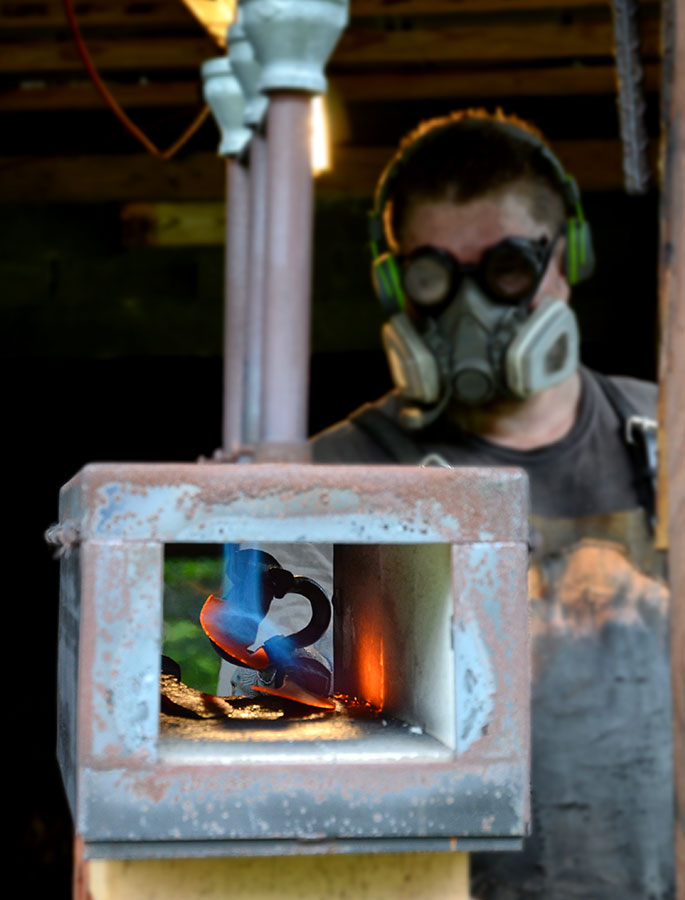 Most would see the fallen cedar as rubbish to be removed, burned, cleaned out; but Schneider has a knack for taking what others have discarded and turning them into functional art pieces. This upcycling happens very clearly in his forge — which he designed and built. The old railroad spikes Schneider uses are practically useless. Once Schneider gets his hands on them, applies heat and hammer, the once low-valued spike becomes a high-valued tool with polish and a personal touch. 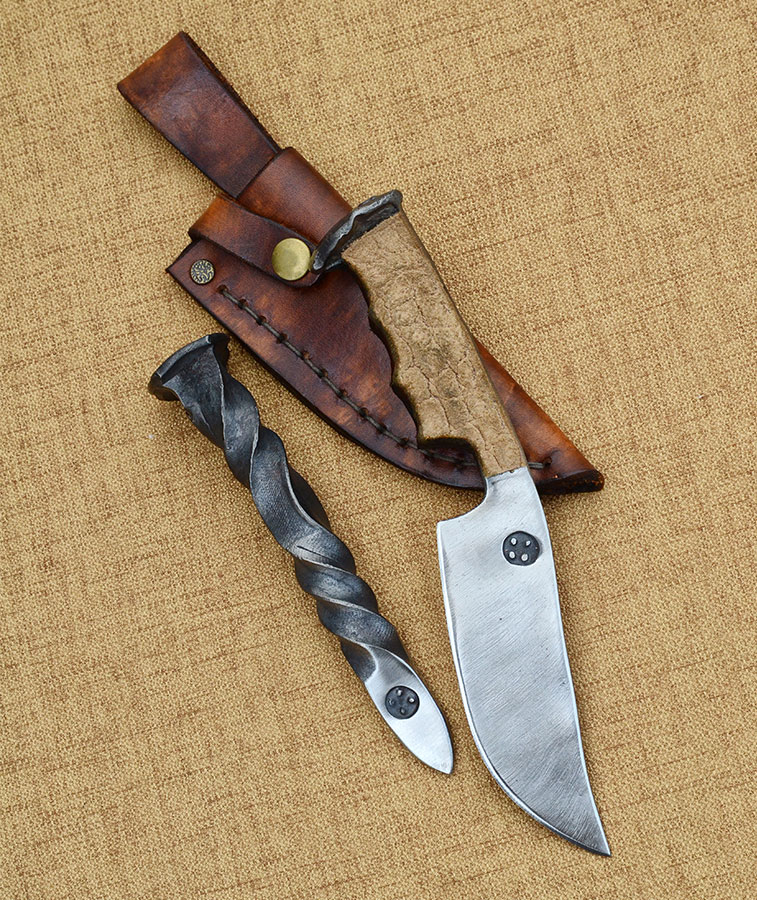 Schneider never loses his philosophical approach that undergirds his art; whether he is explaining the process of taking a spike and forging it into an artisanal, custom-made knife, or demonstrating how to lace together his handmade leather sheaths.

“The value of a day is how much you value the work you put into it,” he says, standing in his open-air forge as chickens rummage for food out in the yard. His house, barn and vegetable garden are reminiscent of a simpler age — and that is exactly what he likes. 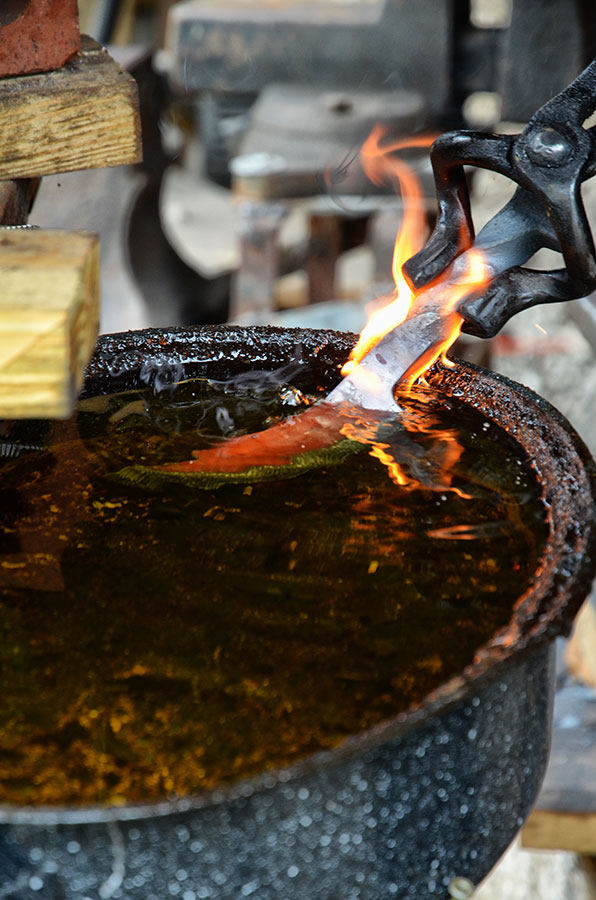 “I am not overly fancy,” Schneider reflects. “I like to work with my hands, the hammer and an anvil.” His tools are mostly built in-house. He has a monkey wrench with a welded rebar to help him twist the spike-knife handle, a furnace made out of a fifty-gallon tank, and numerous other medieval looking tools hanging under his lean-to roof. “It is more challenging to build the tool, but then you have the right tool. The right tool makes every job easier.”

After the anvil work is finished, the knife has taken shape. The backyard blacksmith takes his knife‑in‑the‑making into his shed where a wood table is mounted by three bench grinders and a vice. Sparks shower the floor and the metal screeches as it is slowly, meticulously fashioned. Soon the blade is sharpened and the black, unburnt carbon is removed.

“Each spike is different, and so each knife will be different. I do not want to force my will upon the blade,” Schneider says in explaining how every knife looks unique. “Just like these chickens, it just does as it pleases.” 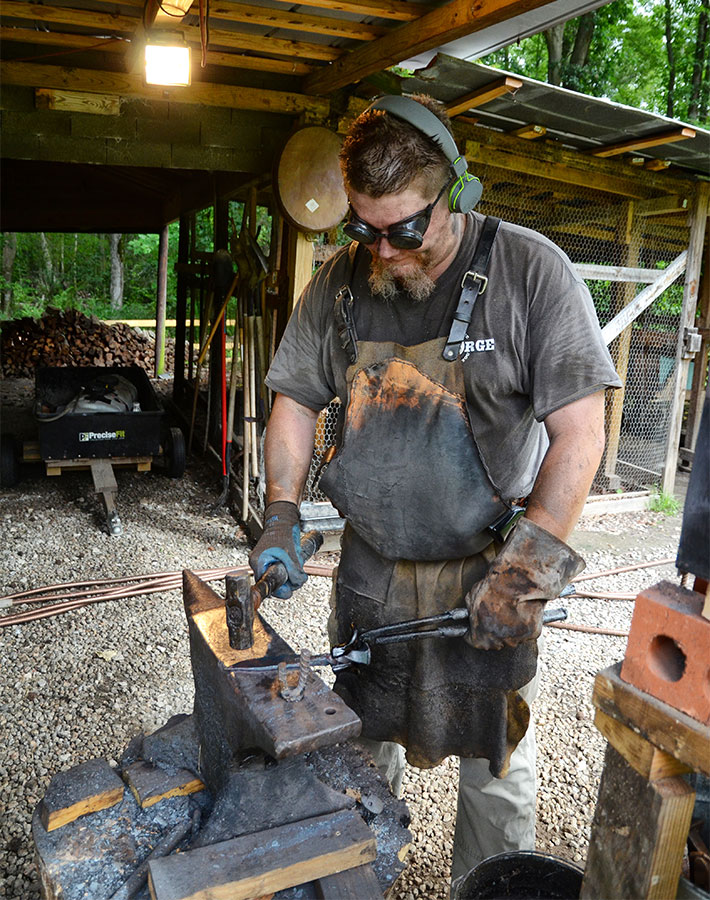 From his backyard forge with his Civil War-era anvil, Schneider takes his finished blades inside to cut, dye and bind the leather sheath. Originality is first priority.

“I am the only one I know of who makes this leather handle,” Schneider notes as he gently pulls a knife out. He closely guards the secret of his leather handles. Demonstrating with his burly thumb, he shows that the leather is bound so cunningly to the metal tang that even with heavy scratches and wear-and-tear, the leather does not rub loose or fray. Next, Schneider takes the handle and strikes the hard corner of his work bench. “A plastic handle would shatter, but leather can be buffed and shines even better after rough handling,” he says, sliding the knife back into its matching leather sheath.

Schneider’s flair for the exotic never lacks functionality. He sports a custom-made visor with rattlesnake leather, a cobra head and a deer antler; the last decoration serves to hold his sunglasses while he is indoors. He points to one knife’s black, bumpy handle, “this is stingray leather.” The material, which he imports from Southeast Asia, is surprisingly soft, comfortable and beautiful combined with the matching stingray leather sheath.

When not at the forge, Schneider stays busy demonstrating and promoting his trade at artisanal showcases across the state (he maintains a list of upcoming shows at spike-knife.com).

“I want to do things no one has attempted before,” he says in his workshop. “Rather than taking the easy way, I want to see skills developed locally. Something people will appreciate pursuing even after their work day. Something to take pride in.”