Reflecting on a Career in the Woods 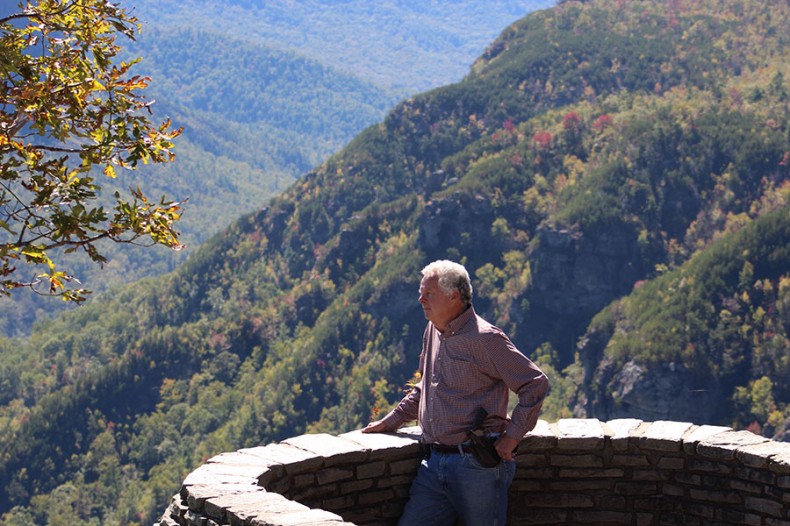 As 73-year-old Clarence W. Smith — C.W. for short — stoically gazes out over the mountainous terrain that stretches out from Wiseman’s View toward Hawksbill Mountain and Table Rock, he is deep in thought, reflecting, as his mind is flooded with memories of the forest he’s dedicated most of his life to.

When he looks down at the knotty pines below and the rocky river that jaggedly cuts through the landscape, he sees much more than just trees and a river — he sees places where he’s had near‑death experiences, or the site where he once rescued a young woman from drowning.

Those vivid memories are swiftly interrupted as a group of chatty out-of-towners approach the popular lookout point, trying to figure out what’s what on the horizon full of peaks and cliffs. Without hesitation, Smith graciously offers insight and answers to their many questions. Like a proud parent showing off his child, Smith happily points out each and every landmark within view, adding in a riveting story or two about them all. Captivated by his stories, the visitors lean in closer to hear every detail the soft-spoken Smith has to share — and he has plenty to share, because Smith has seen and experienced both the natural beauty and unrelenting danger of this forest. For 34 years he lived and breathed this land.

During the three decades he patrolled the Grandfather Ranger District as a law enforcement officer for the U.S. Forest Service, Smith got to know the massive forest inside and out. All the stories he could tell about the mountains and all the things he’s seen during his tenure could fill more than a few books — he’s even witnessed the mysterious Brown Mountain Lights phenomenon (twice). 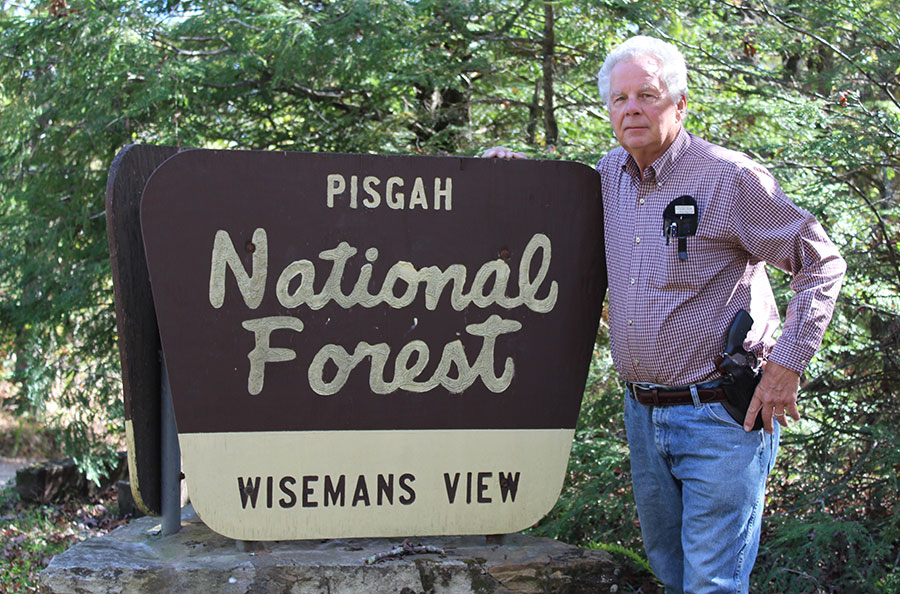 Clarence W. Smith stands next to a sign marking the land he patrolled for 34 years as a law enforcement officer for the U.S. Forest Service

Throughout his entire career, no two days were ever exactly the same for Smith. Shifts could drag on for up to 16 grueling hours and were often unpredictable, because of the struggles that come along with being in open wilderness, including harsh weather conditions, rough terrain, rocky cliffs, rapidly moving rivers and wild animals. Then add in unexpected emergencies like wild fires, accidents or criminal activity. There were many times during his career where Smith thought: “What have I gotten myself into?” But he never thought twice before putting his life on the line to help protect the area and make sure the mountains were a clean, safe place for visitors.

“If it’s your duty and you’re out to protect the public and take care of them, then you just go right on out day after day and do whatever it takes,” Smith says matter-of-factly.

Over the years, Smith has been involved in hundreds of search and rescue missions in the large district that spans  close to 200,000 acres over five counties. Missions have ranged from saving drowning victims and finding lost hikers to recovering fatal plane crashes. He helped track wanted fugitives through the vast wilderness, including the manhunt for Olympic Park bomber Eric Rudolph. While most people would meticulously keep count of each and every rescue and high profile investigation, Smith is too humble for that. He’s never kept count of exactly how many he’s been involved in, modestly saying: “You don’t count ’em, you just do ’em.”

Despite all the danger and unpredictability, Smith says he wouldn’t change a thing.

“I had a great career. I’d recommend it to anybody.” Adding that the freedom of the job made it more than worth it, as well as “being able to get out in the fresh, pure air, and seeing something new every single day. I don’t care how many degrees you have, there’s always something new out there and you never get too old to learn. I still learn every day.”

While Smith has been retired for almost 20 years and is enjoying retirement to the fullest, spending most of his time giving back to the community and helping those in need with his wife, Jennie, he’s still a trusted source in the community for information regarding the forest and helps with investigations when he can. If you spend any amount of time with him, you’ll notice he’s always on watch for anything out of the ordinary or the chance to help a stranger.

“It’s still in my blood,” says Smith. “It’s still my forest. It still seems like it’s my job.”

Amy Trainum lives in Charlotte. She is a freelance writer who focuses on travel, interesting people and places. You can read more of her work at southerndeparture.com.