Events across NC build camaraderie on the water 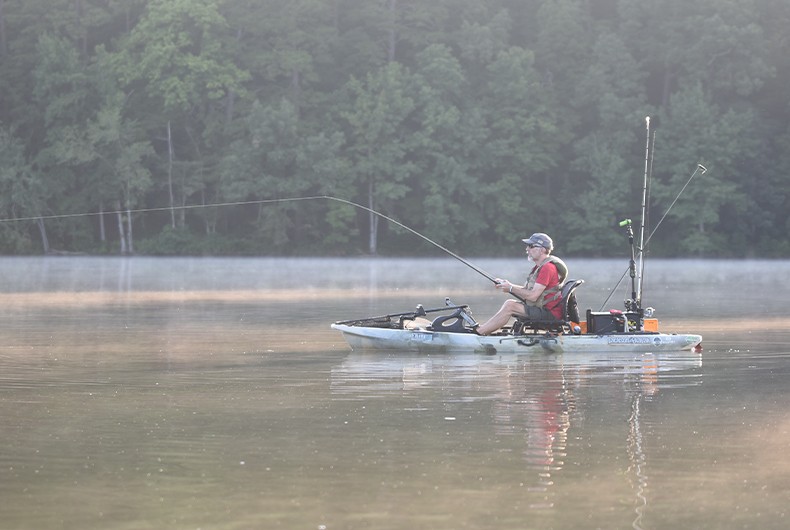 Henry Veggian works a lure in hopes of catching a largemouth bass on an Orange County reservoir.

Dr. Henry Veggian has lived quite the interesting life. He grew up in New Jersey. Graduated from the University of Pittsburgh. A musician, he fronted the heavy metal band Revenant in the ’90s and later worked as a guitar technician for the band Clutch.

Today, Henry spends his 9 to 5 in the classroom as an English professor at UNC Chapel Hill. But on weekends, he trades his pen for a paddle and can be found in his kayak, either fishing for fun or competing in kayak bass fishing tournaments. His hobby had an unlikely start.

“I was brow-beaten and persuaded by friends,” he says with a laugh. “I didn’t want to do it. I didn’t see the point. I went reluctantly into tournament fishing. I fished my first tournament at Jordan Lake in 2012. I love fishing from a kayak, but I was worried about the tournament scene being a little exclusive, and it wasn’t. It was very open. People were nice and friendly, and there was a sense of camaraderie.”

“Kayak fishing, whether it’s tournament fishing or just going out to your favorite lake, is the most fun you can have fishing,” he says. “And anyone can do it.”

The “conventional” bass tournaments, where anglers blast around in boats that can cost upwards of $85,000, can be hyper-competitive, with anglers rarely sharing information about hot areas or productive lures. Once a boater launches their boat, they are on the water. Henry says the kayak anglers are different.

“With kayaks, guys beach their kayaks and they hang around and talk,” he says. “There’s like a built-in sense of community, just because of the boating technology we use. Guys are saying: ‘I’m going here, and I’m throwing this.’ You really don’t hear [power] boaters sharing that information.” There are four kayak fishing organizations in North Carolina; Henry’s primary club is Carolina Kayak Anglers (CKA).

“We raise a lot of money for veteran’s causes, and that’s important to me,” he says. “My heart is there, and I use to be a director. In addition to the work it does with veterans, CKA is also statewide, so we fish from one end of North Carolina to the other. We’ll go from Lake James to Kerr Lake. Border lakes, southern lakes. The highlands. That’s what’s great about these tournaments. You get to go out and fish waters you may have never fished.” 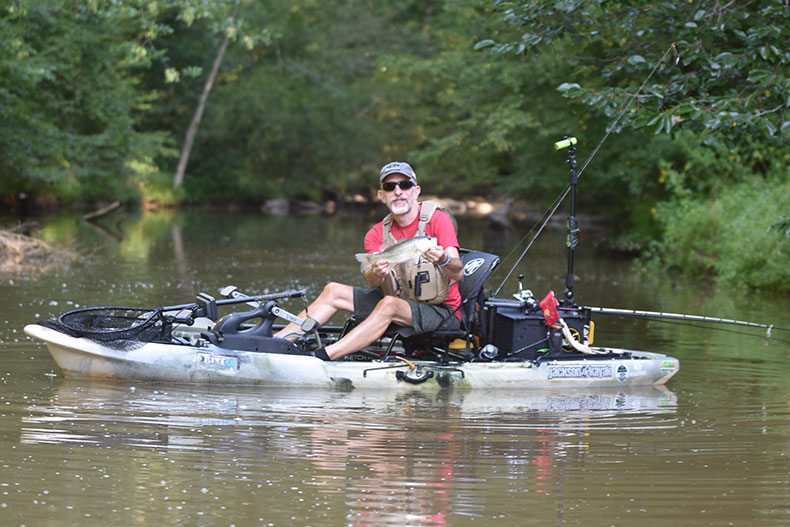 Henry Veggian admires a largemouth bass before returning it to the water.

Henry fishes from a Jackson Bite FD kayak (FD denoting “Flex Drive”), which propels the craft by pedal propulsion. Tournament kayak fishing also differs from the conventional tournaments in other ways. Conventional boats have live wells where bass are held until the anglers return for the weigh in, and the most pounds wins. Kayak tournaments measure the length of the fish, and then it’s immediately returned to the water after a quick photo.

“It’s called ‘catch, photo and release.’ We call it CPR,” he explains. “It’s one of the unique properties of kayak tournament fishing.”

Kayak tournaments use a documentation system that involves taking a photograph of the fish and uploading it to a judging site, or a short video showing the release after the fish has been on a measuring board. The photo or video contains GPS data that show exactly when and where the fish was caught. Each angler also includes a unique identifier in the photo — a card with a code that’s usually released the night before the tournament.

“It’s an additional safety feature to prevent any manipulation or cheating,” Henry explains.

When asked about his favorite body of water, after some thought Henry names Cane Creek Reservoir in Orange County. Not only for the fishing, but for the scenery and seclusion.

“Kayak fishing, whether it’s tournament fishing or just going out to your favorite lake, is the most fun you can have fishing,” he says. “And anyone can do it.”