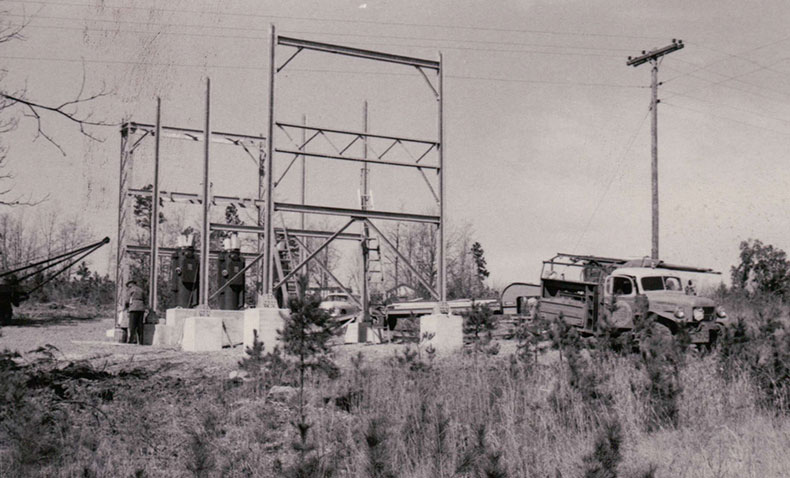 Randolph EMC recently held a dedication for the new Asheboro Substation. We routinely upgrade and construct new substations throughout our service area when needed to meet load growth and to increase reliability for our members, but this one is special.

At the dedication, I shared the founding history of Randolph EMC and why this substation’s location is so important within the pages of our past. This month, I want to share with you why it is so significant.

In 1905, something life-changing  came to the residents of Asheboro. A private electric utility, The Asheboro Company, built a power plant and began running lines in town to provide electric current.

In 1911, the city’s Board of Commissioners, as they were called at that time, purchased the company’s assets and operated the electrical system until it was sold to Carolina Power and Light in 1924.

But kerosene lanterns, wood cook stoves, water buckets and outhouses were the only options for people living just on the outskirts of town and throughout the adjoining counties. They were not able to take advantage of these new innovations. But they wanted the same conveniences as their neighbors living in the city.

In the late 1930s, community leaders from Randolph and adjoining counties began holding meetings to investigate how they could bring electric current to the rural areas. The founders often referred to these areas in their discussions as “unserved or inadequately served.” They had a vision and were on a mission to improve the quality of life for people living in rural areas of central North Carolina.

These meetings led to an application to the N.C. Rural Electrification Authority (NCREA) on January 6, 1939, to form an electric cooperative for this region. On January 24, 1939, NCREA granted permission. Two days later, on January 26, 1939, the Certificate of Incorporation was filed with the Secretary of State and Randolph Electric Membership Corporation was formed.

At the first Board of Directors meeting on January 30, 1939, Bylaws to guide the organization were adopted. A resolution to obtain insurance, forms for application for membership and membership certificates were approved.

The next day, on January 31, the board approved bidding a construction contract to install the initial power lines and to apply to the Rural Electrification Authority (REA) for a loan of $300,000 to help pay for it. That initial loan was to purchase the poles, wire, transformers, meters and hardware that would run approximately 300 miles of line to serve 1,040 members.

On March 6, with the assistance of a search committee of the board, a superintendent (as the first managers were called), Mr. Johnny Mason was hired.

On May 11, 1939, two major milestones occurred. First, a contract was approved with Carolina Power and Light (CP&L) for wholesale delivery of power, but the cooperative needed a location to make the tap to CP&L’s line. On that same day, Mr. T.G. and Mrs. Kathryn Bonkemeyer sold Randolph EMC a lot that was 50 feet square for $150 to place the first substation. It was located on “the old road from Asheboro to Franklinville.” In 1939, this road’s number was Highway 90, which would later be changed to Highway 64. Today, the road is Martin Luther King, Jr. Drive. Randolph EMC’s first power line, creatively called 1 Line, as it still is today, left the original substation and headed east.

What makes the new Asheboro Substation’s location special is that the original property for Randolph EMC’s first substation is located at its driveway entrance. 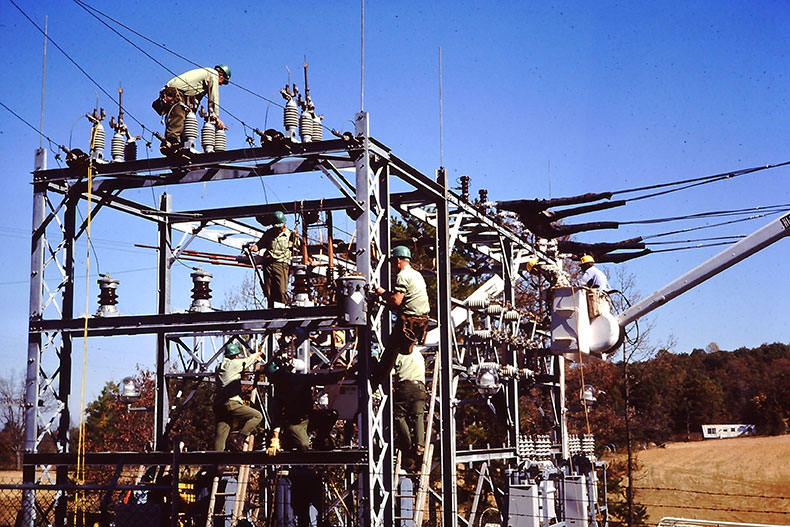 That original small substation that served the first energized members was replaced in the 1950s. It has served its purpose and was retired when the new Asheboro substation came on-line.

The new Asheboro Substation was a $2 million project constructed to meet future growth on the east and south side of Asheboro. It combines today’s highest safety standards with the latest technology to ensure safe and reliable electric service for many decades to come.

Even though it’s been almost 80 years since community leaders gathered around flickering kerosene lanterns with a vision to light the rural countryside, some things have not changed. The flame of service, commitment and innovation burns as bright today at your local electric cooperative as it did in 1939.

Just like the original founders and employees, your current Board of Directors and employee team have a vision to provide you with safe and exceptional service. Things have come full circle.

Learn more about Randolph EMC, it's history, and the cooperative principals which guide it.