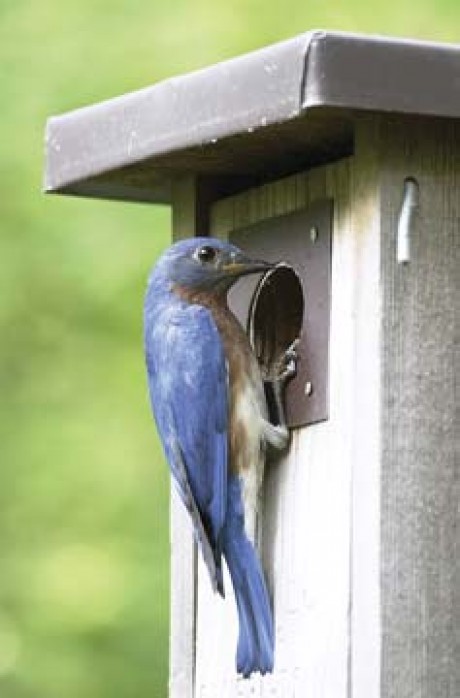 Bluebirds are members of the thrush family and a bit larger than sparrows, about 7 inches. Males are vivid blue with a rusty-red breast and white belly. Females are similarly colored but much duller. Young birds have a gray-and-white speckled breast with a tinge of blue in the wings and tail.

Bluebirds are often described as having a cheerful song and disposition. Adults and children alike are enchanted by bluebirds' stark beauty and docile nature. They spend hours watching them build their nests and peering into boxes to count the eggs and young.

In the temperate season, bluebirds feed almost exclusively on insects. They hunt from high perches, scanning the ground for grasshoppers, grubs and other insects, then swooping down to snatch up their prey. Both the male and female feed their babies meals of primarily soft insects. In the winter, when insects are scarce, bluebirds eat berries. They particularly love the berries of hollies and dogwoods. Beautyberry, elderberry, mulberry and sumacs (staghorn or winged) are other suitable fruit-bearers that homeowners are encouraged to plant.

Bluebirds stay in North Carolina year-round and usually begin searching for nesting sites in late February or early March. So it's best to put up new boxes by January or early February. Days or weeks may pass before the male and female begin collecting grasses or pine straw to build a nest, usually in April. They typically build a nest in five or six days. The female begins laying eggs four or five days later. She lays one light blue (or rarely white) egg each day until the clutch is completed, then begins incubating them. The young hatch in about 17 to 18 days and spend another two weeks in the nest.

Bonded pairs can raise three broods each season—the first brood averages five young, the second brood four and the last one three, though as many as six may comprise a brood. The breeding season lasts until early September.

A versatile and functional bluebird box has a fixed floor, three fixed walls, and a front wall that swivels at the top and latches at the bottom. Entrance holes should be no smaller than 1 1/2 inches and no larger than 1 9/16 inches (to exclude starlings, which are larger than bluebirds). Perches are not recommended. Floor size should be either 4-by-4 inches or 5-by-5 inches. Boxes must have ventilation and drainage holes in each corner. Birdhouses may be mounted on wooden, metal or PVC poles. Baffles on the poles made of plastic or aluminum tubing will discourage predators like snakes and raccoons.

Place boxes at a height convenient for monitoring, usually 5 feet. Allow 100 feet between boxes, as bluebirds are territorial. Select a site near open or mowed areas, but not too open—bluebirds need a high perch nearby from which to spot prey. Boxes may be erected year-round. Put up new ones by mid-winter to recruit birds.

The N.C. Bluebird Society has county coordinators who provide bluebird house plans, tips and reference material. To find the coordinator in your county, visit the society's Web site at www.ncbluebird.com. Or call Chuck Bliss at (336) 625-5423.

The Birdhouse Network provides field worksheets and instructions for recording and submitting your data. Your input helps biologists expand the body of scientific information. See birds.cornell.edu or call (800) 843-BIRD. Observe and record nesting activity, including when egg-laying begins each season, what materials the birds use for building the nest, size of the clutches and survival rate of young. Remove any dead babies as soon as you see them but leave unhatched eggs alone. Clean out boxes between each brood, removing old nest material, blowfly larvae and other insects, and debris. Check for and fix any leaks.

Bluebirds build neat, cup-shaped nests made of weed stems, grasses and sometimes pine straw. House sparrow nests are tall and messy, sometimes made of trash. Remove these nests, or better yet, locate your boxes away from places where house sparrows abound—such as close to your house or near a source of grain. Do not disturb nests of other native species that may use the box, such as tree swallows, flycatchers, wrens, chickadees and titmice. These are protected by law and are desirable species you can still have fun observing.

Unlike typical feeder species, bluebirds must be coaxed to eat from a specialty feeder. Supplements like berries and mealworms can help birds survive harsh winters when starlings have stripped shrubs and trees of fruit. For training tips, consult any of the sources listed above, learn about bluebird boxes, or read about a North Carolinian who specializes in making his own.

Ready for more bluebirds? See and hear the Eastern Blue bird at these multimedia sites.