Farmer & the Chef & the Biscuit Maker

Vivian Howard, Warren Brothers and Lillie Hardy. In Vivian’s book, she acknowledges each of them as “teachers and friends.”

Warren Brothers’ farm in the Institute community outside of Kinston is enveloped in a thick layer of fog. A bunch of guineafowl emerges suddenly — otherworldly looking creatures running straight toward a visitor’s car. They are making such a ruckus with their high-pitched screeching and honking, it’s no wonder a group of guineafowl is known as a “confusion.”

No need for a guard dog here; the effect, especially to those unfamiliar with the birds, is to stay put in the car. Almost as quickly as their urgent approach, they disappear back into the fog. Maybe they were just the welcoming committee.

As the fog begins to lift, Warren drives up in his truck. The smiling, affable farmer lives just down the road from this part of his farm that has become one of the selected spots for photo and television shoots for his friend Vivian Howard, chef, restaurateur, cookbook author and TV personality on “A Chef’s Life,” which aired on PBS for several seasons. Warren made guest appearances on the show. 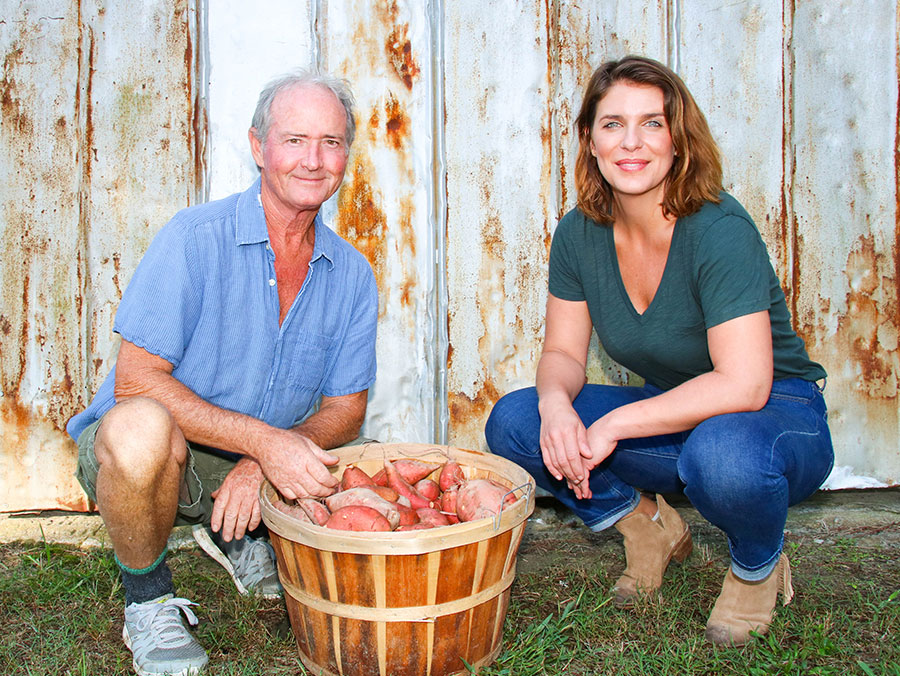 “I could see the writing on the wall about tobacco, so I was looking for something else to do,” Warren says as he reflects on the farm’s more recent endeavors. He raised chamomile for several years, which was shipped to Germany for shampoo and other products. He then started a cut flower business, which coincided with Vivian opening what would become the acclaimed Chef and the Farmer restaurant in Kinston. She now has two other restaurants.

“I just popped in there with a bucket of flowers before she even opened up,” explains Warren. He says Vivian indicated she’d “be tickled” to have the flowers for the restaurant tables, but what she really needed was someone to raise vegetables that weren’t readily available at farmers markets. That included parsnips, daikon radishes and exotic greens. It was the beginning of his organic vegetable farm and a friendship. 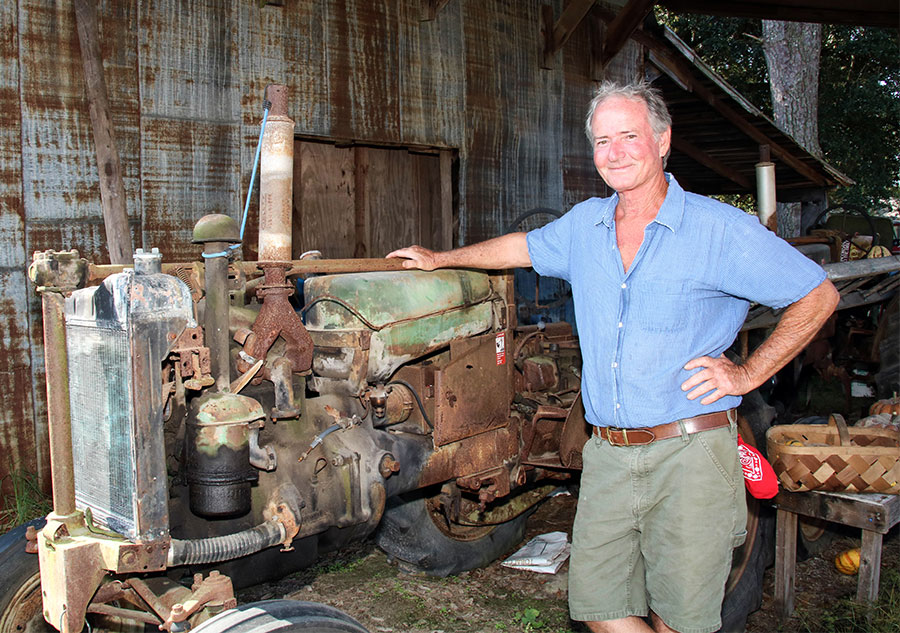 Since that first meeting in 2006, Warren has researched numerous vegetables to add to his repertoire that might be of interest to Vivian and other chefs. He grows more than 40 different vegetables and herbs and is always on the lookout for new varieties. He scans the Baker Creek seed catalog (rareseeds.com) for ideas from its list of seeds from all over the world.

Every year he asks Vivian what is new and exciting, and then tries to plant accordingly. He planted a lot of bronze fennel this year. Other popular items include broccolini, cucamelons, Hakurei turnips, Chantenay carrots, and greens that are half collard and half Komatsuna (an Asian green). He is also trying several varieties of okra, including red okra and Thai okra. He sells produce at the farm, at the Kinston and Pitt County farmers markets, and to five restaurants. He continues to grow flowers — tulips, irises, lilies and gladiolas in the spring and zinnias and sunflowers in the summer up until frost.

Warren says he is one of several farmers in the area who is on “speed dial” to keep Vivian’s restaurants “in vegetables.” He appreciates the focus on and interest in locally grown foods, saying that anytime Vivian mentions a new variety on her show it helps people across the country discover new foods.

“Ms. Lillie has a thriving biscuit business. She will open up her home and give biscuit lessons to groups or individuals on how to make a good ol’ Southern biscuit.”

Warren and one of his employees, Lillie Hardy, who washes fresh produce and bags it for customers, were frequent guests on Vivian’s television show and are mentioned throughout her cookbook, “Deep Run Roots.” In Vivian’s book, she acknowledges each of them as “teachers and friends.” She writes, “the two of you, plus your mothers, Mary Vaughn and Annette Brothers, allowed me my first glimpse into Eastern North Carolina home kitchens beyond the one I grew up in.”

“A Chef’s Life” ended last fall after five seasons, but it continues to be aired on UNC-TV. Fans of the show continue to seek out Warren and Lillie. 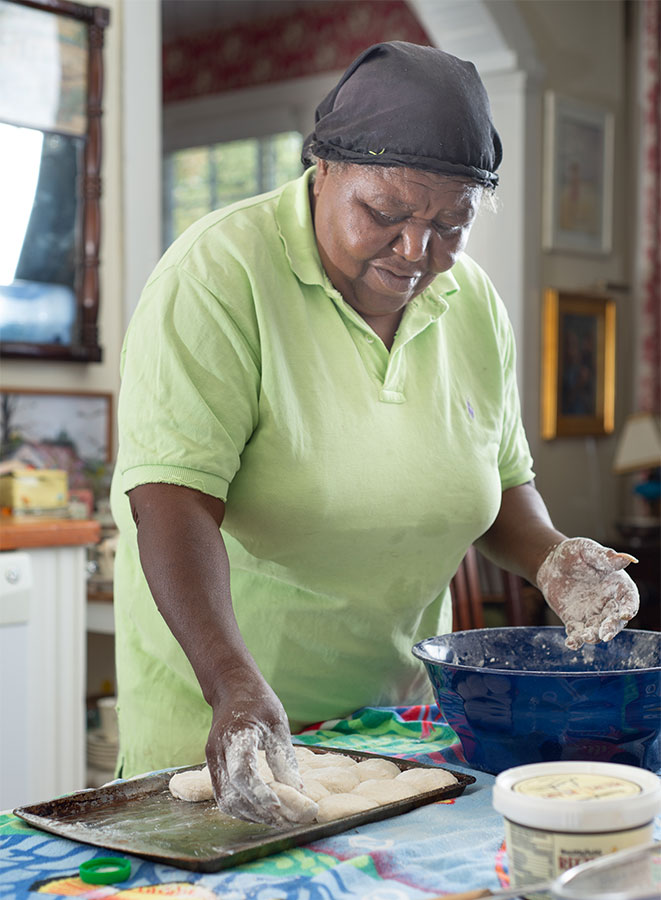 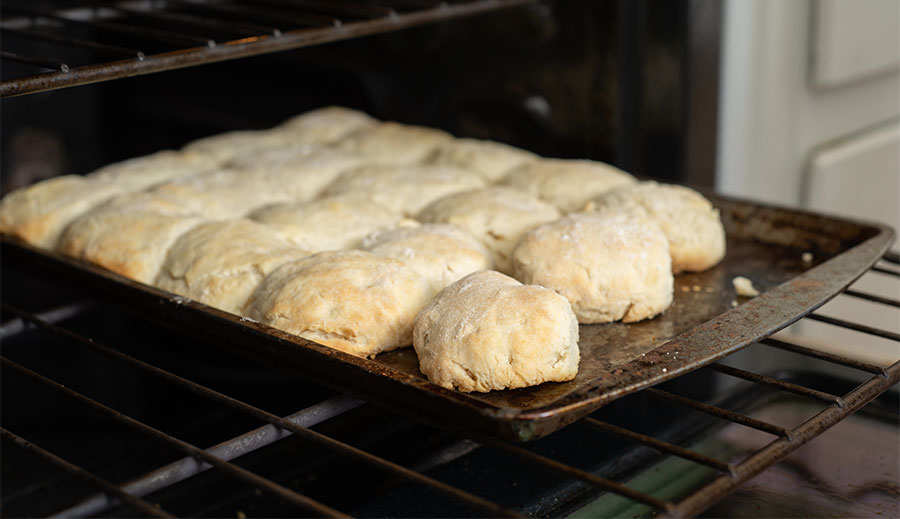 Lillie and her famous biscuits. Photo by Randy Berger Photography.

“There’s not a week goes by that I don’t get a call that someone wants to come out here and see the farm because they’ve seen it on TV and they want to see it in real life,” Warren says. “And Ms. Lillie has a thriving biscuit business. She will open up her home and give biscuit lessons to groups or individuals on how to make a good ol’ Southern biscuit.”

Vivian acknowledges that her show makes a connection with folks across the region.

“It reminds people of how they grew up, the foods they grew up eating; the characters on our show like Lillie and Warren and my parents remind them of people in their lives,” she explains.

Warren’s low-key, easygoing style takes all the attention in stride. He is used to a rotation of newspapers, magazines and TV shows that visit his farm to interview Vivian, which often include him and Lillie.

“It’s pretty huge,” he says. We’ve done a ton of these. [Vivian] has been in every major publication in the country. It goes on and on.”

He shares about being part of a Better Homes & Gardens magazine photo shoot with Vivian for the previous Thanksgiving that was staged in his home, an 1853 farmhouse. A photographer flew in from New York and spent three days on the shoot.

“It was the darndest thing I’ve ever seen,” he says. “She is a popular girl.”

Vivian is now working on a new PBS series, “South by Somewhere,” which will premiere in early 2020. Warren and Lillie have a Facebook page (simply named “Warren and Lillie”) that keeps folks apprised of happenings at the farm, including a new hemp crop. Warren and his wife, Jane, were interviewed for a segment on the public television show called “Family Pictures USA,” which premiered on PBS in August.

Warren acknowledges that many farmers just don’t have time for dealing with the media to that extent. But then he laughs, adding: “Oh shoot, I enjoy it, to be honest with you!”