The Secret Code of Quilts 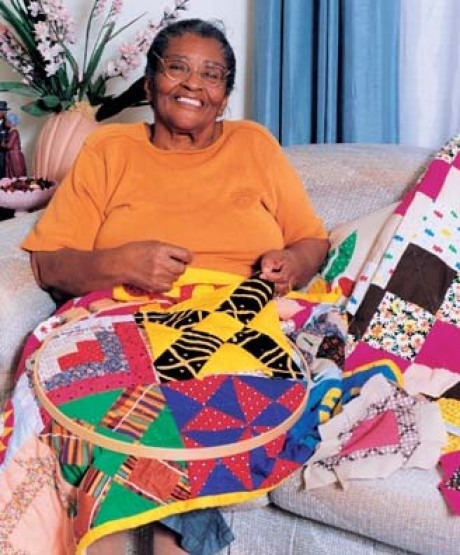 Laura Sneed makes samplers of the Quilt Code and teaches people how the code helped fugitive slaves. A professional seamstress for many years, Laura Sneed makes the quilts as wall-hangings or as bed spreads. Her quilts hang in churches, schools and in other public and private collections. (Photo by Bruce Clark)

Slave traders in the 1700s and early 1800s sought out the most skilled, intelligent and healthy people they could find in West and Central Africa. Although they were torn from their communities and forced to work in Caribbean and American homes and farms, enslaved Africans held on to the traditions of African civilization, culture and religion. They brought their talents. And they never lost their desire to be free human beings.

History has recorded some successful uprisings, but most attempts to escape bondage failed. As the economy of the southern United States became increasingly dependent on slavery in the late 1700s and early 1800s, slave-owners tightened their grip. Northern states gradually abolish slavery later, but the Fugitive Slave Act of 1793 required states to return slaves to their owners. Slaves would be severely punished for gathering with one another unless supervised by whites. Even drumming was prohibited, because slaveholders suspected drum beats carried information and signals. Simply communicating amongst themselves required slaves to develop a secret language or code. Singing what became known as "spirituals" was part of that language – a language that conveyed information and ideas by using traditional African symbols and images even when veiled by what seemed to be a Christian devotion or prayer.

The Underground Railroad was a network of free blacks and sympathetic whites that operated to assist fugitive slaves. According to some accounts (including that of Wilbur Siebert, an Underground Railroad historian who published a major study of it in 1893), the name Underground Railroad derives from a statement made by a man closely pursuing a slave escaping from Kentucky. When the escapee suddenly vanished from a riverbank, the pursuer said it seemed the man had "gone off on an underground railroad." It was most active between about 1830 and 1865, when the Abolitionist movement was gaining strength in the U.S., especially after 1850 when Southern political leaders won a re-enforcement of the Fugitive Slave Laws.

Escaping the plantation was dangerous and scary business. While slaves certainly knew more about the surrounding countryside than their masters did, they did not know much about where they were going. They depended on help from other slaves, free blacks and helpful white families. Runaways covered maybe 10 miles a day on a journey that could last four or five months passing through wilderness and hostile territory. The Underground Railroad involved a series of "safe houses" and "stations" where fugitives could hide, as well as a map of routes to some northern states and especially to Canada where individual freedom was assured. Because any escape had to be planned and executed in secrecy, there was minimal communication within the network. The Underground Railroad relied on secret communication methods that had been developed for generations. Escape required an understanding of the code not only among slaves throughout the South, but also among the loosely connected free blacks who were instrumental in assisting fugitives. In fact, learning about the Underground Railroad is difficult because so much of the planning and running was done in secrecy and in coded language.

Research and the passing down of family stories have revealed many aspects of the secret signaling used to help slaves flee to freedom. These range from the use of open or shut windows to lighted gateposts, from signs placed along the routes to secret phrases exchanged between free blacks and runaway slaves.

One of the secret communication systems that has come to light only recently is the Underground Railroad Quilt Code. Historian Jacqueline L. Tobin, along with African American art historian and quilter Raymond G. Dobard, in 1999 published their study of the Quilt Code in their book, "Hidden in Plain View: A Secret Story of Quilts and the Underground Railroad." The study began in 1994, when Jacqueline Tobin met Ozella McDaniel Williams, an African American quilter in Charleston, S.C., who gradually revealed the story as she had learned it from her mother and grandmother.

Much of the language itself has faded away entirely. Even though Ozella McDaniel Williams was the keeper of the code in her part of South Carolina and disclosed it to Jacqueline Tobin (only after Ozella recognized her as "ready" for the story), Tobin and Dobard had to delve into ancient African decorative arts symbolism and the conditions of African American slavery to crack the code's meaning throughout the Underground Railroad.

This is how the Quilt Code worked as far as we know it:

African American slaves combined common quilt patterns and sewing methods with traditional African symbols and images to make bed quilts that would display messages. The messages themselves were part of a language that held meaning only for people who had somehow learned it from any of a number of teaching methods – in worship services, through storytelling or in secret sessions with elders.

Slaveholding families and white supervisors had no cause to suspect anything unusual about slave women making quilts, either for white families or for themselves. Likewise, it was common practice to hang quilts outdoors during daylight to freshen them in the air, especially during the spring and summer months when most escapes occurred so that slaves could reach Canada before cold weather. The quilts acted as billboards, sending encoded messages to slaves intending to flee as well as to those on the run. Slaves who did not know the code most likely traveled with guides who did.

Most often, the quilts displayed a single design made of several squares of the same pattern. For example, a quilt showing the Monkey Wrench design (also known among quilters as a Square and Compass or Carpenter's Square) signaled slaves to "prepare the tools" they would need to carry on their escape. Slaves seeing the Monkey Wrench quilt hanging in plain view some spring day would know to get ready to leave, and to collect not only the hardware they would need, but also the mental and spiritual tools to fortify them. The pattern also resembled a ship's wheel and in coastal areas could carry the message that a black seaman or boat pilot was prepared to transport slaves.

As Ozella Williams told it, the first message in the Quilt Code was "The monkey wrench turns the wagon wheel toward Canada on a bear's paw trail to the crossroads." Slaves who knew the code would know this phrasing as well as the four symbols within it: the Monkey Wrench, the Wagon Wheel, the Bear's Paw and the Crossroads. And each of the four symbols is a quilt square pattern.

After noticing the Monkey Wrench quilt on display, advising them to prepare for the journey, slaves would then look for the Wagon Wheel quilt hanging somewhere, telling them to "load the wagon" or prepare to board a wagon coming to pick them up or simply to go. The Wagon Wheel is a common quilt pattern and appears in many forms, but always as a wheel.

Seeing a Bear's Paw quilt when setting off or somewhere along the may have told the slaves to follow the trails the bears take in spring and summer – in the South it very likely would have been a route through the Appalachian Mountains. The mountain trails were safer than roads more commonly traveled. Following bear tracks in the woods would not have been especially difficult for people who did not know exactly where they were going. And the animal tracks also could help fugitives find water and food along the way.

As Jacqueline Tobin says, quilts displaying the Code served as road maps on the route to freedom. They flashed visual messages "hidden in plain view." Along the several routes of the Underground Railroad, enslaved blacks in the South and free blacks in the North knew the Code and hung quilts to report local conditions to the runaways who they knew would be traveling in certain seasons. One message was to seek shelter, another to continue to a church, another to take on a disguise. The well-known five-pointed Star quilt pattern told fugitives to follow the North Star. Even the stitching on the reverse side of a quilt contained a secret road map code, indicating, for example, the number of miles between safe houses along the route.

(Adapted from Ozella McDaniel Williams, as reported in “Hidden in Plain View: A Secret Story of Quilts and the Underground Railroad” by Jacqueline L. Tobin and Raymond G. Dobard. Published by Doubleday in 1999. Softcover edition by First Anchor Books, 2000.)