By Bridgette A. Lacy | Photos courtesy of Boxcarr Handmade Cheese 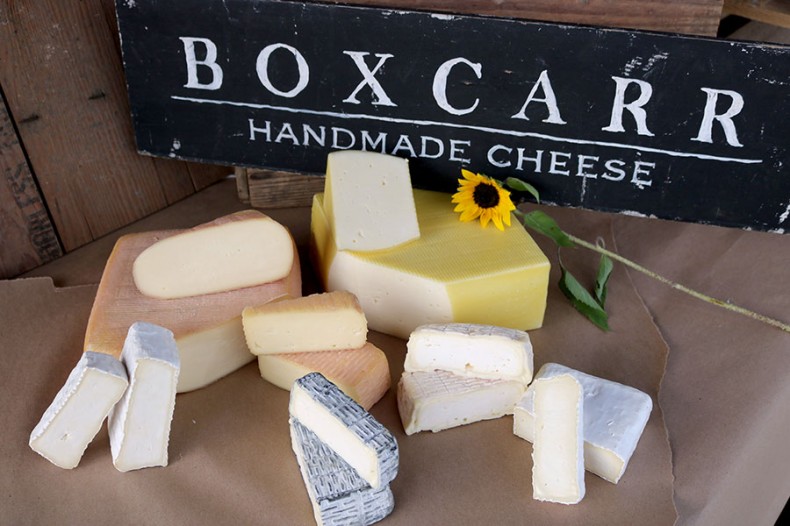 On a bucolic farm in Cedar Grove, Austin and Samantha Genke are winning awards and impressing taste buds with their Italian and Mediterranean inspired cheeses. Since the siblings’ company, Boxcarr Handmade Cheese (boxcarrhandmadecheese.com), opened in April 2015, it has been making a most delicious mark on fromage lovers. 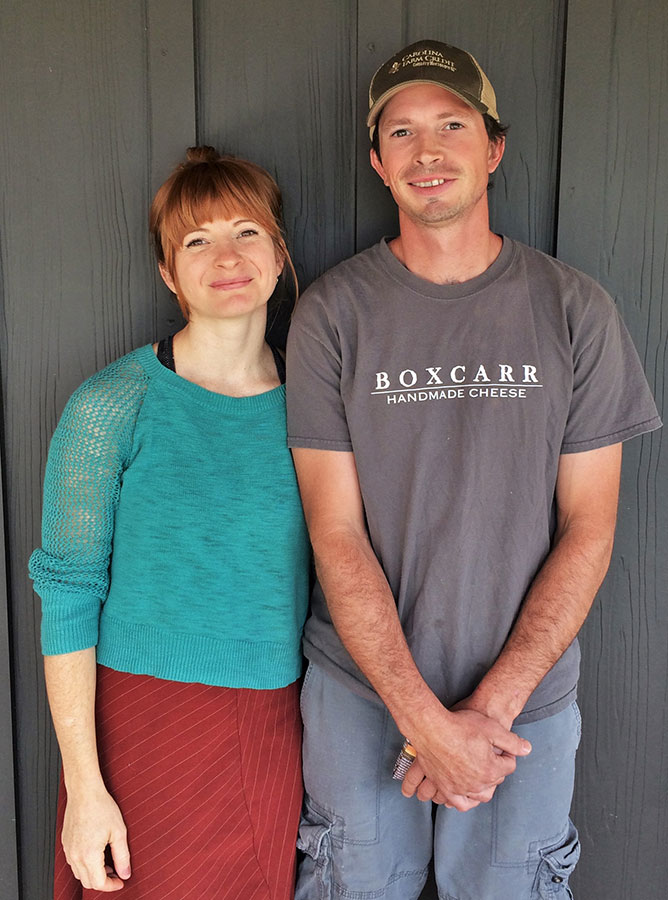 The 30-acre Boxcarr Farm houses chickens, goats and a rapidly expanding cheese-making facility. The company produces 11 to 13 cheeses yearly and about six are sold nationally, including in big city gourmet shops and restaurants from San Francisco to New York. Several of its cheeses have won culinary awards. The creamy, decadent Robiola-style Cottonseed, made from both cow and goat milk, won best of show only months after the first batch was made at the NC State Fair. In 2016 and 2018, it placed third in the American Cheese Society awards in the category for soft-ripened cheeses from sheep’s, mixed or other milks. The cold-smoked Campo was awarded best of show at the 2018 NC State Fair.

Austin and Samantha are first-generation farmers, though they come from an agricultural background. Their father is a sales and marketing director for a citrus grower and moonlights to help them with Boxcarr. Initially, the entrepreneurs sold vegetables and meats from the farm, but decided to distinguish themselves by making cheese. Austin explains that Boxcarr’s cheese merges the flavor of Southern culture and his Italian roots.

The 35-year-old describes his role at Boxcarr as a-jack-of-all trades. He juggles working with contractors on building a milking parlor for the goats and an expansion of the packing room as he prepares for a food trade show in Atlanta. Austin, a Culinary Institute of America graduate, worked in casinos and restaurants in Las Vegas before moving to Orange County to be closer to his sister.

Samantha, 37, became interested in cheese while working in the specialty department of Whole Foods; then she took a sabbatical to hone her skills caring for goats at Goat Lady Dairy in Climax (see our article “Farm Dining in the Piedmont,” April 2018, to learn more about that farm). During her time there, she also assisted in cheese making. She then moved from apprentice to cheesemaker at Chapel Hill Creamery, where she worked nine and half years before starting Boxcarr.

What’s the secret of the curds? “The milk is always changing,” she says. “We use different cows’ milk. If you change one thing, there’s a chain reaction. We use Italian cultures; they are unpredictable, but we like their profile.”

The Genkes use the cows’ milk of two nearby dairies and their own cross-breed of Alpine and Nubian goats. This year, the Genkes, along with the small staff of six full-time workers and four part-time workers, expect to produce 60,000 pounds of cheese. 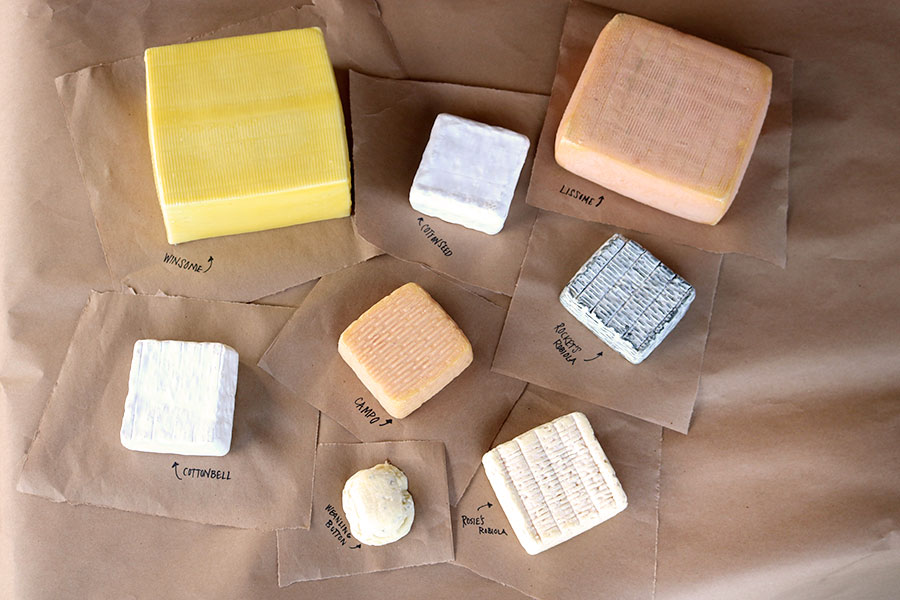 “We feature Rocket’s Robiola, Cottonbell and Redbud on our cheese board matched with jams and jellies,” explains Aaron, who was a semifinalist in the best chef category of the James Beard Foundation awards from 2011 to 2016. “They all bring unique flavor profiles.”

“The Robiola, when ripe, is like softened butter with a touch of acidity and salt. There are a few nice bitter notes from the ashy rind, and we pair it with strawberry jam,” he continues. “The Cottonbell is soft and grassy with the slightest funk that comes from the tender billowy rind. We use an onion jelly on it. The Redbud, I find to be sharp with the slightest tang and some nuttiness. It’s semi-soft and the rind is rubbed with paprika for a hint of smoke, and we match it with pepper jelly.”

On Saturday mornings, Austin and Samantha sell their products directly to consumers at the Durham Farmers’ Market. According to Susan Sink, the market manager, Boxcarr has a faithful customer base.

“Personally, I adore their Freshen line,” she says referring to the spreadable cheese line that includes the flavors of Pimento, Chive, Herb & Garlic and Peppercorn. Susan likes adding the soft cheeses to frittatas or a quiche. And with fall coming, Susan is already thinking about grilled cheese sandwiches made from Campo, a creamy, cold-smoked savory cheese.

“I add wilted turnip greens or baby kale and pair it with a heartier wheat bread and onion. It also adds a smoky flavor to French onion soup or a quiche, or even chili if you want to melt it on the top.” 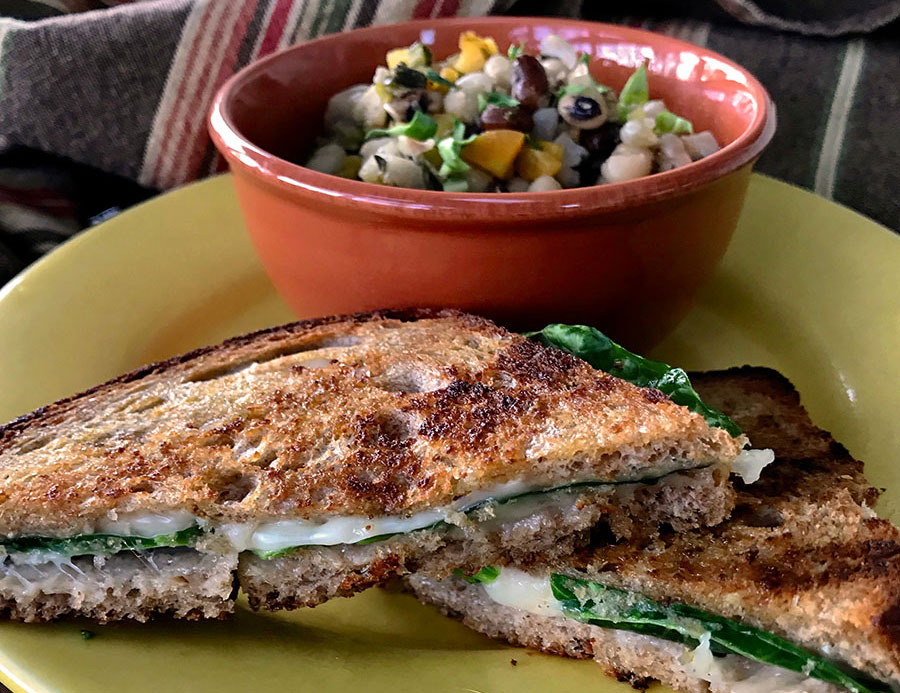