New life for a pier where fishing has been a tradition for generations. 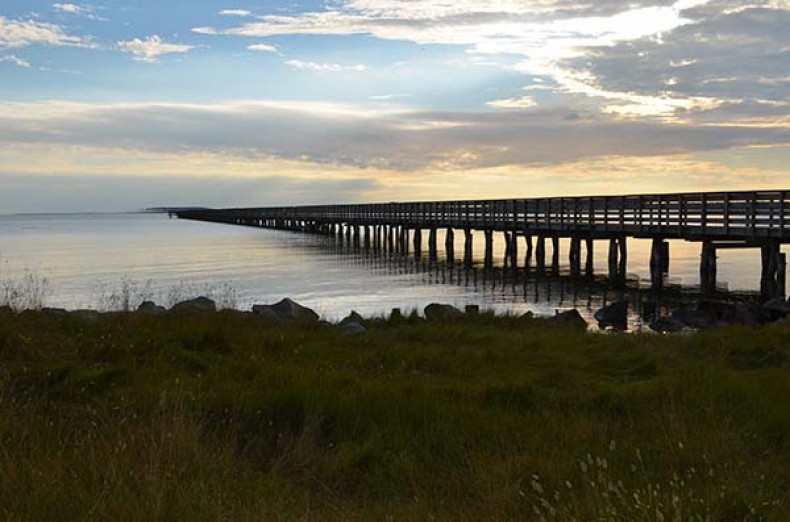 Bell Island Fishing Pier was built in Hyde County by the Civilian Conservation Corps soon after the establishment of Swanquarter National Wildlife Refuge in 1932. The gravel road leading to the pier is the only land access to the 16,000 acres of marshland, forest and waterways that make up the refuge.

I began fishing with my mother on the pier over 60 years ago. We called it the Rose Bay pier back then. Mama would get me up early in the morning while it was still dark outside. Packed in the car with fishing gear, coolers with ice and Coca Colas, and the picnic basket, Daddy drove us from our home in Plymouth down Hwy. 32 to Hwy. 99, a long, long way — or so it seemed when I was a little girl. We turned off 99 and worked our way on country roads into Hyde County to reach Hwy. 264, then drove east until we reached the entrance to the wildlife refuge and the long road leading to the pier. The sun would just be peeking up to light the sky. As a girl I would sit on the pier next to a hole made by storms that washed out some of the boards. I fished through that hole with a drop line, while Mama stood right next to me and cast out with her rod and reel from the end of the pier. 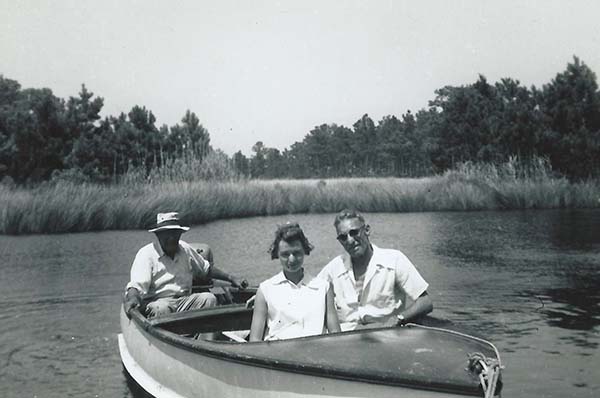 This is my grandfather, Tom Burgess (“Papa Tom”), who in the 1950s kept his boat in a boathouse near the Bell Island Pier. With him this time were friends of the family, Ed Jackson and his daughter Jean.

My mother often filled her cooler with croakers, spot, speckled trout, flounder and sometimes a nice big puppy drum. Her favorite bait was shrimp. She always saved one or two small fish for cut bait. When the grandchildren went with her they often supplied some earthworms they dug themselves. Occasionally she used bloodworms, but she favored shrimp. She didn't buy "bait shrimp," because she was sure fish preferred the fresh shrimp sold for human consumption.

As I got older it became evident to me that "going fishing" didn't always mean catching fish. Mama didn't mind catching nothing. She was happy to stand there all day, "fishing" sunup 'til sundown. Her hope never wavered that the "big one" was out there, and one day she'd catch it.

I didn't have that kind of patience. So, I stopped going along once I was old enough to stay home alone. Then I had children of my own. They delighted in going with their grandmother to fish at Rose Bay. She taught them well, and they still love fishing.

Even though I didn't care to fish if the fish didn't bite, I did learn some good life-lessons on the Bell Island Fishing Pier. I learned to love the isolation and beauty of our North Carolina marshlands. I also learned the value of being patient. And most of all I learned to hope, because no matter how little the catch is today, there is always a bigger one waiting to be caught tomorrow.

New life for an old pier

The pier has been damaged many times by various storms. Hurricane Floyd destroyed it in September 1999. It was renovated in 2003 only to have Hurricane Isabel take it out again later that same year. Finally, Hurricane Irene in 2011 forced the pier closed.

Volunteers led by Dr. John Hale, with support from U.S. Fish & Wildlife employee Larry Boomer, spent 400 hours over three days working on the pier to make it safe and accessible once again. Bell Island Fishing Pier now juts 1,000 feet out into Rose Bay, with a T crossing the end to give fishermen and women more elbow room for casting out to catch that "big one." Several bait-cutting stations have been added, and there is a gravel parking lot and portable toilet. There are no trash cans, and no caretaker is on duty. Visitors take their trash when they leave.

Recently the Nature Conservancy and Fish & Wildlife collaborated to construct an oyster reef on either side of the pier to help with erosion and provide a habitat for oysters.

The pier is open every day from dawn to dusk. A North Carolina Recreational Fishing License is required to fish on the pier. Most of the local bait and tackle shops in the area sell the licenses.

Swanquarter National Wildlife Refuge is located on the north shore of Pamlico Sound east and west of the village of Swan Quarter. The Bell Island Fishing Pier is at the end of a two-mile long gravel road off Hwy. 264 two miles west of Swan Quarter, about 60 miles east of Washington.