The Crop that Pops

By Debbie Moose | Photos by Wendy Wood / The Yadkin Ripple

The largest of 10 storage silos at Shallowford Farms, home of Yadkin Valley Popcorn, can hold 1 million pounds of popcorn kernels. If all silos were full, it would come to 7 million pounds. But there’s no need to worry about an explosion on a hot summer day.

“Popcorn has to reach about 400 degrees inside the kernel to pop, so that’s not going to happen,” says Sam Vestal, company manager.

As one of the state’s few popcorn growers, capable of growing as much as 2,000 acres, the Yadkinville-based company’s farm-to-snack offerings include flavored popcorn as well as the raw kernels. The products are sold in several North Carolina and East Coast supermarkets.

“It’s popped and packaged right on the farm where it’s grown, Sam says. “Eating this, you’re eating your heritage.” In the field, popcorn looks and grows just like conventional corn, but it’s an entirely different variety.

First of all, ears of popcorn are smaller, although they’re harvested with the same kinds of combines. Then popcorn requires special processing. Conventional corn intended for animal feed can be put in large dryers after harvesting and is dried to a moisture content of 25% to 30%, Sam explains. However, popcorn will pop in the hot dryers, so the ears are left on the stalks to dry in the field.

The moisture content is also different — 12% to 13% for popcorn. Workers use a special machine to check the moisture level, because if the corn dries out too much, you’ll get nothing but duds when you start popping. (The moisture level is important because popcorn pops when, under heat, the moisture inside the kernel expands and puts pressure on the starchy surface until it explodes and turns the kernel inside out, creating the fluffy treat that fuels movie watching.)

Popcorn became associated with movies during the Great Depression, according to food historians. It was an affordable treat, and popcorn carts proliferated in cities, many setting up in front of theaters to catch patrons. Theater owners saw the snack’s popularity and began selling popcorn themselves.

In recent years, popcorn has gained a reputation as a healthy snack, which has led to several national brands of bagged popcorn, plus theater-style flavors. Yadkin Valley Popcorn’s sales went up during the pandemic, possibly because people were watching movies at home but still wanted theater-style snacks. There are many varieties of popcorn that pop into different sizes and shapes. Jonathan Mounce, operations manager, said that Yadkin Valley Farms uses a variety of the shape described as “butterfly” or “snowflake,” which pops up fluffy and takes seasonings well.

To make flavored popcorn, the company uses a large air popper which can pop 350 to 400 pounds of popcorn an hour. After popping, it’s tossed in soybean oil to add flavor and color, Jonathan says. Then flavor coatings are added. Yadkin Valley Farms’ most popular flavor is butter, but there’s also white cheddar and others.

For caramel corn, the popped corn is mixed with caramel and dried. The process is similar for a line of candy flavors that include blue raspberry, birthday cake and pina colada. 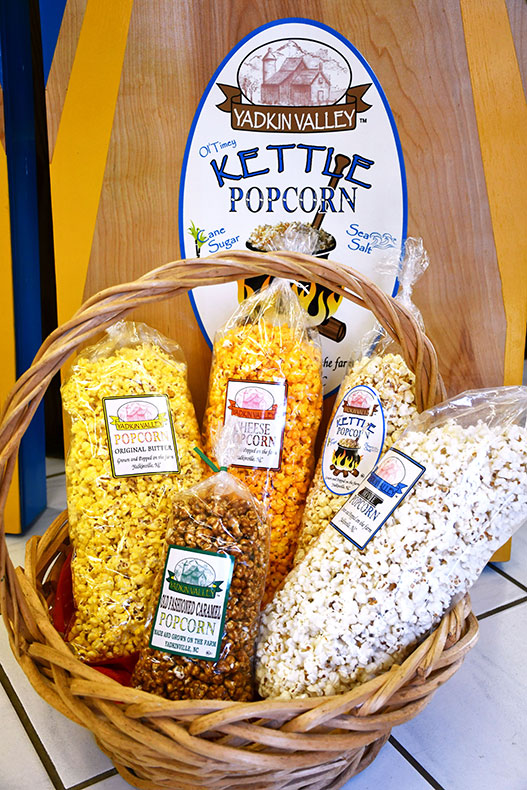 Kettle corn is popped in gas-fired kettles along with with oil, sugar and salt to provide the characteristic sweet-salty flavor.

Shallowford Farms has been operating for more than 30 years, although in the beginning it grew popcorn for other companies. When NC State University graduate Caswell Booe bought the business in 1998, he upgraded the equipment, began selling the popcorn under its own name and planning for the company’s future. After Booe’s death about two years ago, the company continued the plans, looking at more efficient equipment and working with a food scientist on different flavors.

New ideas just keep popping up. In collaboration with Garner Foods, based in Winston-Salem, starting in January the company will offer popcorn in Texas Pete and Texas Pete Hot Cheddar flavors.

“You either get all in or get out quick in the popcorn business,” Sam says. “We’re planning on staying.”

See a quick video tour of Yadkin Valley Popcorn or visit their website to schedule an in-person tour.

Debbie Moose (debbiemoose.com) who has authored seven cookbooks and is a former food editor for The News & Observer in Raleigh.