Electric Power is Key to the Future of a Bolivian Village

Sitting at an elevation of 11,600 feet, nestled into the foothills of the Tunari mountain range, is the small, central Bolivian village of Laphía (pronounced ‘La-PEE-ah’). It’s home to about 120 hardworking people who live off the land by farming potatoes, onions and flowers.

We approached the remote village in pickups, navigating switchbacks that threaded around deep ravines on a gravel road from Tiquipaya, the nearest developed town. Crop fields and adobe homes with thatched roofs dotted the undeveloped landscape as we ascended.

Because of their remote location, the people of Laphía have never had access to electricity. They have no way to refrigerate food, run appliances, use electric lights, or use any electric-powered learning tools at the community school. 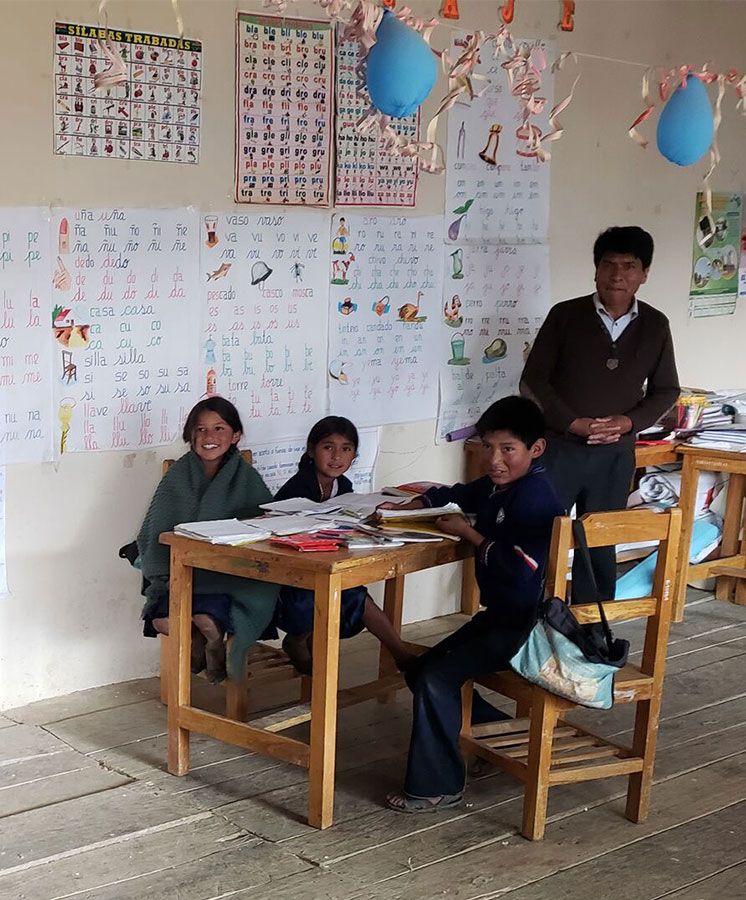 It’s a reality that is hard for most of us in the United States to imagine, but around the world, more than one billion people live without electric power, according to the International Energy Agency. Only 66 percent of rural Bolivians had access to electricity as of 2016.

Our small team had traveled from North Carolina to assess Laphía for electrification. Electric cooperatives formed in North Carolina more than 80 years ago to bring light, and opportunity, to rural areas of the state. Empowering people — and connecting communities with electricity despite challenging conditions and landscapes — is what co-ops do.

And now, through a joint initiative of North Carolina’s 26 electric co-ops and in coordination with global development nonprofit NRECA International, the co-ops are demonstrating the cooperative way, and sharing their gifts, by bringing electricity to Laphía for the first time through the Brighter World Initiative.

Upon reaching the village, our first stop was the community school, where adults, children and a few stray dogs had gathered in the courtyard between the modest buildings.

Tiquipaya sub-mayor Judith Gonzales greeted us, and village leader Augustín Aranibar proudly described the people in the community: humble, well-organized, hardworking, and proud to be good stewards of the land. He emphasized that the promise of electricity would allow for a better education for their kids, provide conveniences and new economic opportunities, and lead to a better way of life. He said this project was a key to the future of the village, as younger villagers would be more inclined to stay in the community. Several who had moved away were now interested in returning.

The teacher, named Pastor, invited us into the school’s two classrooms to visit with students. Boys and girls in kindergarten through 6th grades sat attentively at wooden desks, surrounded by hand-drawn posters on the walls. The only light in the classroom was streaming through the windows, and school supplies were limited to pencils and books. Despite the lack of modern learning tools, all 20 students were excited and engaged in their lessons.

Working with local engineers, plans were penciled out to build five miles of power lines that will connect nearly 70 homes and the school to the grid.

Next, the team climbed back into trucks and drove through the community, tracing the path for new power lines and finalizing work plans that will bring life-changing opportunity to the people of Laphía, including the students in the two-room schoolhouse. The team from North Carolina included Eddie Stephens, a crew leader at Blue Ridge Energy in Lenoir; Chris Spears, CEO of Dunn-based South River EMC; Chuck Richardson, vice president of engineering at South River EMC; Ingrid Hunsicker, a senior program manager for NRECA International; and myself, representing North Carolina’s Electric Cooperatives, the statewide association for the state’s 26 co-ops.

Working with local engineers, plans were penciled out to build five miles of power lines that will connect nearly 70 homes and the school to the grid. The team also decided to wire the school classrooms for lights as part of the project.

In the spring of 2019, 13 NC co-op linemen will travel 3,700 miles as volunteers to carry out those plans. We invite you to follow along on their journey, because as a member of an electric cooperative, you are part of this project. There was a time when rural North Carolina was without electricity and the advantages it brings. Now it is our opportunity to give the gift of light, transforming not only those receiving it, but also those giving it. It’s a journey worth following.