Thomas Golden appointed as next CEO 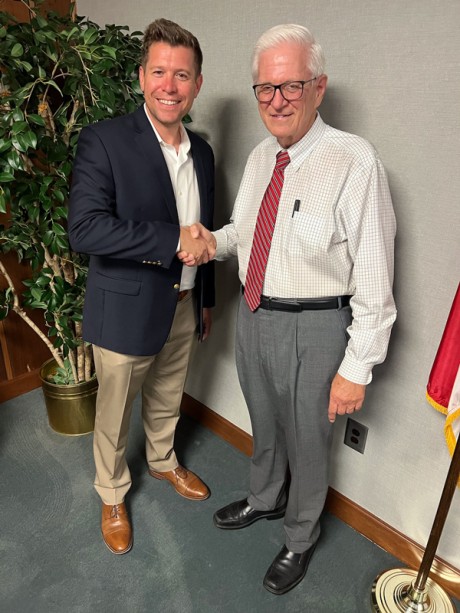 In May, EnergyUnited CEO Wayne Wilkins retired following a career with electric co-ops that spans decades.

“Over the course of his storied career in the energy industry, Wayne was continually committed to supporting member and community service initiatives that positively impacted so many people,” said EnergyUnited Board Chairman and President Dr. Max Walser. “I am incredibly thankful to have had the opportunity to serve with Wayne and sincerely appreciate all that he has done on behalf of EnergyUnited members.”

Wilkins’ 51-year career with North Carolina’s electric cooperatives includes service as CEO of Davidson EMC, where he helped coordinate the consolidation of it and the neighboring Crescent EMC to form the present-day EnergyUnited, based in Statesville, in 1998. The co-op has since deployed new technologies to better serve members and increase reliability, including advanced metering infrastructure, smart grid technology and electric vehicle chargers.

His service to the electric cooperative network extends to the state level, where he served on the North Carolina Electric Membership Corporation and North Carolina Association of Electric Cooperatives (NCAEC) boards of directors, including providing guidance as NCAEC Board President in 1990 and serving on the NCAEC Executive Committee from 2008–2013. He has worked closely with legislators at the state and national levels, advocating on behalf of the communities served by electric cooperatives across North Carolina, and has supported political action as Chair of the Rural Electric Action Program.

“There are just so many incredible people and facets within this job that have pushed me and grown me as a leader, a friend and even a father.”

“As I look back and ask myself the question of what I would do different, I don’t think I could’ve picked a better business to be in,” Wilkins told EnergyUnited members ahead of his retirement. “There are just so many incredible people and facets within this job that have pushed me and grown me as a leader, a friend and even a father.”

Following the announcement of Wilkins’ retirement, EnergyUnited Board of Directors appointed Thomas Golden to serve as the cooperative’s next CEO.

Golden recently served at the co-op’s COO, where he was responsible for the oversight, implementation and execution of many strategic initiatives that focused on developing growth opportunities, operational enhancements, improving member value and maintaining superior safety and reliability performance. He holds a Bachelor of Science degree in nuclear engineering and engineering physics from Rensselaer Polytechnic Institute in New York, as well as a Master of Business Administration from Wake Forest University.

“I am honored to serve EnergyUnited members as the cooperative’s CEO,” Golden said. “More than 115,000 EnergyUnited members trust their cooperative each day to deliver safe, affordable, reliable and environmentally-responsible energy. While these primary service pillars remain consistent, our members’ expectations will continue to evolve with the implementation of new technologies and innovative solutions. As EnergyUnited’s CEO, I’m excited to lead the cooperative into this future with member satisfaction always top of mind.”