My experience at the Youth Legislative Assembly 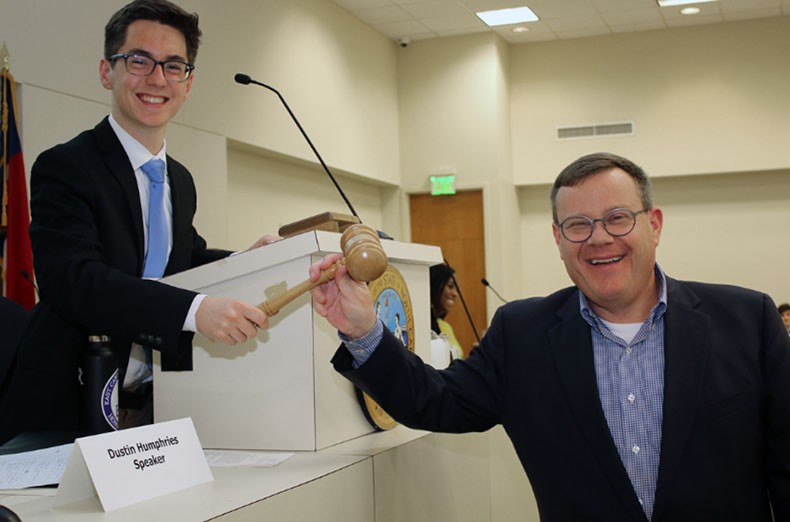 Rep. Tim Moore, speaker of the North Carolina House of Representatives (right), presents Dustin Humphries with a speaker gavel at the 2019 YLA.

“I really hope this tie looks right,” I thought as I slid it over my neck, careful not to undo the knot. I was embarrassed that even though I was in the 9th grade, I still didn’t know how to tie them. My dad took me to my Grandpa’s house a few days before so that he could pre-tie the knots for me. As my Grandpa spun the tie into complicated loops, it suddenly became a clean knot, perfectly centered and symmetrical around my neck. He gently loosened it, lifted it over my head, and placed it on the hanger — ready for me to slip on before I headed to Raleigh.

After my mom dropped me off and hugged me goodbye at the meeting spot, I squeezed into a car with some of my other friends. We were all incredibly nervous — and our ultra-professional attire didn’t help. We were going to the Youth Legislative Assembly, or YLA, as the older students always called it. I had heard about the program for years and was encouraged by several teachers to go for myself. I wasn’t sure what to make of it. Even though I was interested in politics, would I know enough to keep up? Would the other students laugh at what I said? Would I be a political minority? These thoughts and doubts about my place at the mock legislature, even though it was just a weekend, bounced throughout my head.

We arrived at the conference, which was teeming with students already talking about the bills and their plans to stir up the politics at the session. I was amazed at just how energized everyone seemed to be, almost as if these students were legislators themselves, running around to talk with other students and rallying support for their ideas. Their energy reverberated onto me, I was talking to people my age who cared about the very things that I did. Perhaps wearing a tie isn’t as uncomfortable as I thought it was.

The conference began with a smack of the gavel, echoing throughout the “chamber” and silencing every whisper. “Welcome to the 45th session of the North Carolina Youth Legislative Assembly!” the student projected from the dais. We stood up and took the official oath of office, just like the actual elected officials do, and were dismissed to our committees. I was on Judiciary, and the bill that we would discuss was written to change the adult trial age to 18. In my mind, there was simply no argument against the bill. Why should minors be tried as adults when they are children? Yet soon after we began the meeting, proponents and opponents alike began defending their beliefs and sought to amend the bill before we presented it to the chamber as a whole. We left the meeting, uneasy about the fate of our bill and if it would survive the brutal debate from the 200 high schoolers from all over the political spectrum. 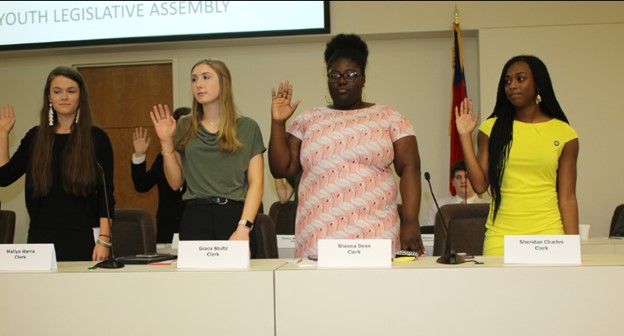 “North Carolina knows YLA, and year after year, it invests in these students because of how well YLA prepares its participants to serve our region.”

The bill’s time finally came, and I arrived at the session with my speech in hand. I approached the podium, barely able to read my cards because of how much I was shaking. Somehow, by God’s grace, I finished my speech. As I walked back to my desk in the chamber, my new friends raised their hands to give me high fives. “What are you doing? I could barely form a sentence!” I said. “Are you dumb? You killed it! That was awesome!” they retorted. Maybe, I thought, public speaking wasn’t so bad after all.

Our controversial bill caused the chamber to slowly erupt into an organized chaos like nothing I had ever seen. Proponents roared from the podium about how those without adult rights could not be tried under adult laws, while dissenters proclaimed that we need not discriminate by age for crimes of the highest degree. After an hour of the back-and-forth, the debate closed, and the gavel signaled that it was time for a vote on the bill. We submitted our votes and anxiously watched the clerks complete their tally. After what seemed to be an eternity, the gavel struck again. 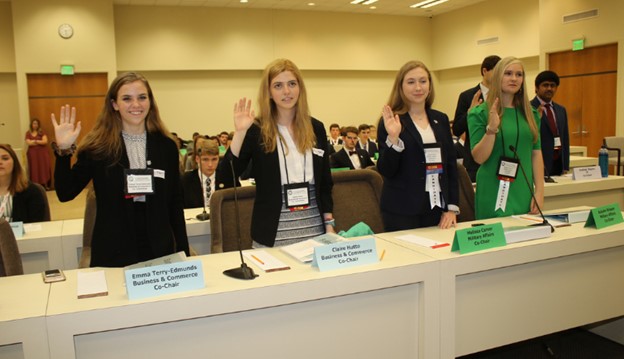 My friends and I rejoiced, only stopping to momentarily gloat to our opponents. Even though the bill was fake — and that at the end of the weekend we would go back to being normal high school students — I was amazed at such a display of democracy at work. I knew then that I wanted to work for the rest of my life at finding ways to make our government be the best servant to the people that it can be. A weekend conference with strangers from around the state was defining my future, and I couldn’t believe it.

For the rest of my time in high school, I made YLA my primary commitment, spending my sophomore and junior years chairing committees and writing bills. During my senior year, I became YLA’s lieutenant governor, the program’s highest student leadership role. Now, as a college student, I’ve come to realize just how much four years at YLA developed my character and leadership abilities. My high school experience would be incomplete without YLA, and if I could relive the debate on each of the bills, the late nights discussing politics, and the fresh cookies we ordered to our hotel rooms, I would do it in a heartbeat. 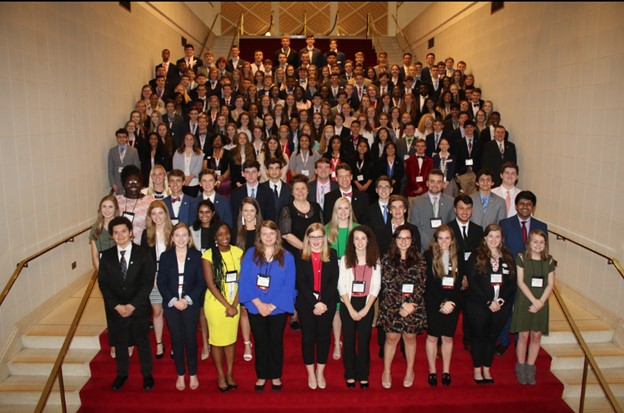 Having grown up in the small town of Timberlake, North Carolina, my web of opportunities was slim. And while I will forever be primarily grateful for how YLA sparked my flame for public service, I cannot overlook the role that YLA has played in my professional development. After my first year in college, some of my connections with YLA helped me land a summer internship under Senator Phil Berger, the leader of the North Carolina Senate. While this network was important in securing the role, more so was the reputation of the program among our very own elected senators and representatives in the General Assembly. Year after year, students from YLA are hand-picked to work throughout our government because state leaders know how valuable an experience from YLA is. I know personally of students who worked with me in the Senate, others in the House, some for the lieutenant governor … the list goes on. North Carolina knows YLA, and year after year, it invests in these students because of how well YLA prepares its participants to serve our region.

For a program about state government, I’ve been amazed to see how global its participants are. One of my best friends from YLA is now studying at the elite Sciences Po in France, the world’s most renowned political school, while other friends attend the University of Pennsylvania, Duke, and UNC-Chapel Hill. Students go on to intern in Congress, work for venture capital firms, volunteer for nonprofits, become nurses and serve on campaigns. The critical thinking, leadership and professional skills that YLA imparts on its students are sought after by universities, organizations and employers all around the world. Not only does YLA develop the worldview of hundreds of students each year, but it also connects them to myriad opportunities that would have been unattainable without it. 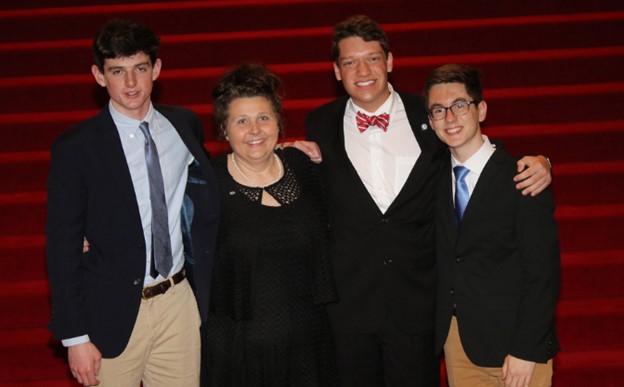 The Youth Legislative Assembly’s unparalleled exposure to our government’s most sacred chamber is an opportunity that simply cannot be passed up. I urge you to consider your purpose in contributing to North Carolina. Do you want to make a lasting impact? Do you have a heart for improving communities? Are you ready to see real difference in our state? The time is now for young people like us to engage at the fullest extent to change the world. YLA is the perfect place to start.

Dustin Humphries served as speaker during the 2019 Youth Legislative Assembly. He is a sophomore student at Stanford University studying economics and Spanish. Prior to beginning his studies at Stanford, Dustin interned under Senator Phil Berger in Raleigh, Congressman Dan Bishop in Washington, D.C., and the UNC System Office’s General Counsel in Chapel Hill. For more information about Dustin’s experience at YLA, please contact him.

Get the scoop about the 2022 Youth Legislative Assembly.

Interested in attending the 2022 Youth Legislative Assembly? Apply by February 1, 2022.