Protecting — and staying safe around — our state’s wild gators 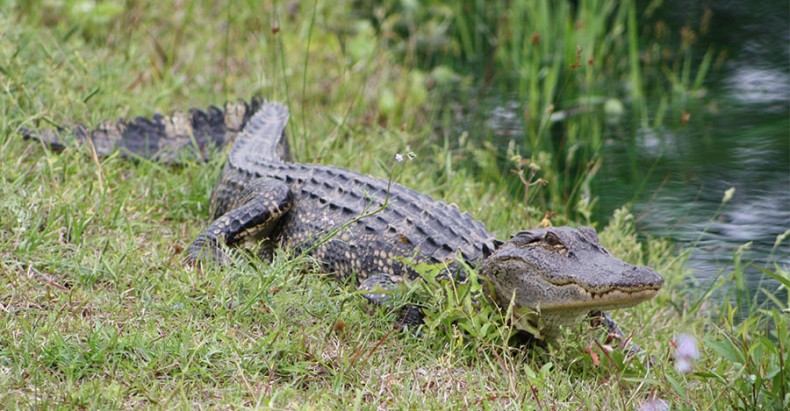 The first time Cheryl Woodring saw an alligator in Tyrell County, she and her husband, Danny, were on the way home from the Outer Banks. The Tideland EMC member knew people had seen alligators in the canals along US 64 near Manns Harbor. “Maybe we will see an alligator on our way home today,” she told her husband.

“Of course, I was not serious and never expected to see one,” Woodring says. “We had gone across the Alligator River Bridge when we came around a curve and there were all these cars stopped on the side of the road, and people were out looking at something across the canal! So, we did what everyone else was doing and we stopped … and there he was … laying up on the canal bank just loving the sunshine. I took several pictures and we went on our way. At that time, I had never see one just out in the wild like that.”

American Alligators (Alligator mississippiensis) can be found throughout the coastal regions of the Southeast, with North Carolina being their northernmost known habitat. They thrive in NC swamps, rivers, canals, tidal basins, and even ponds and lakes along the coastline and eastern inland regions. On occasion, they will venture out into the ocean — as was testified in June 2015 by two fishermen who photographed an alligator swimming just inside Oregon Inlet.

These creatures were almost obliterated from the state in the last century. But they’ve since made a comeback, and can now be found as far northwest as Gates County and south to the South Carolina border.

There is even a Charlie’s Crew Kids Club. Kids who pay the annual dues will get a t-shirt, sticker, membership card and discounts to special events. Visit battleshipnc.com for more information.

A bit about gators

Male alligators top out at 500-plus pounds and can grow to a length of 14 feet. Females are smaller, weighing up to 200 pounds and reaching a max of 10 feet (snout to tail tip). Alligators grow slower in North Carolina than those living further south because the weather is cooler, and the feeding season is shorter.

Alligators do not hibernate as mammals do; they “brumate.” Being cold-blooded, they respond to the temperature of their environment. When it gets cold, they make a den or underground burrow and shut down. They don’t go to sleep; if brumating in a burrow underwater they have to surface to breathe. As they brumate their metabolism slows, and they stop eating. Alligators have been observed sticking their snouts out of frozen water to breathe and sometimes become stuck in the ice. Once the ice melts they swim away. It is easy to see how these adaptable creatures have survived for millions of years.

The number of alligators in the state and their range is not fully known. For that reason, the NC Wildlife Resources Commission is asking people who see alligators to report their sightings. This “citizen science project” will help the commission answer the question, “where in North Carolina do people see alligators?” Visitors and residents of the state can upload their photos and a note about the location of the alligator to inaturalist.org. 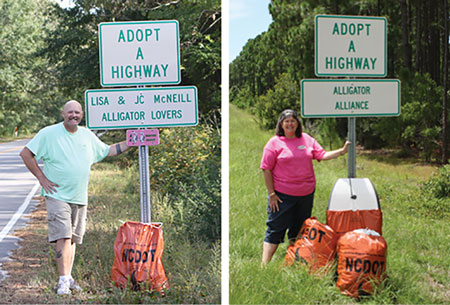 John and Lisa McNeill founded the Alligator Alliance (alligatoralliance.com) to protect alligators in Brunswick County. Their primary tool is to educate the public.

The couple says they feel very fortunate to be able to observe alligators in the wild in our state and not just in a zoo or an aquarium. “We truly believe that alligators are our last living dinosaurs.”

The McNeills remind us that as an indigenous species to North Carolina, alligators play an important role in our ecosystem.

“Alligators are naturally afraid of humans and will avoid contact,” they explain. “The ones that are not afraid are the ones that have been illegally fed. This creates what is referred to as a ‘nuisance’ or ‘food-conditioned’ alligator. When that happens, they lose their natural fear of humans and are often relocated or euthanized.”

The McNeills continue: “For the most part, alligators are misunderstood. If we all use a common-sense approach, we can co-exist with them. This means, be aware that any body of water in our coastal regions has the potential to have an alligator in or near it. It also means stay away from them, do not feed or harass them and of course, keep children and pets away from them. If alligators are left alone they can exist as the wild animals they were intended to be, and we can all continue to enjoy these marvels of nature in their natural habitats. They have survived for millions of years and this is their home. If we educate, we won’t have to relocate.” 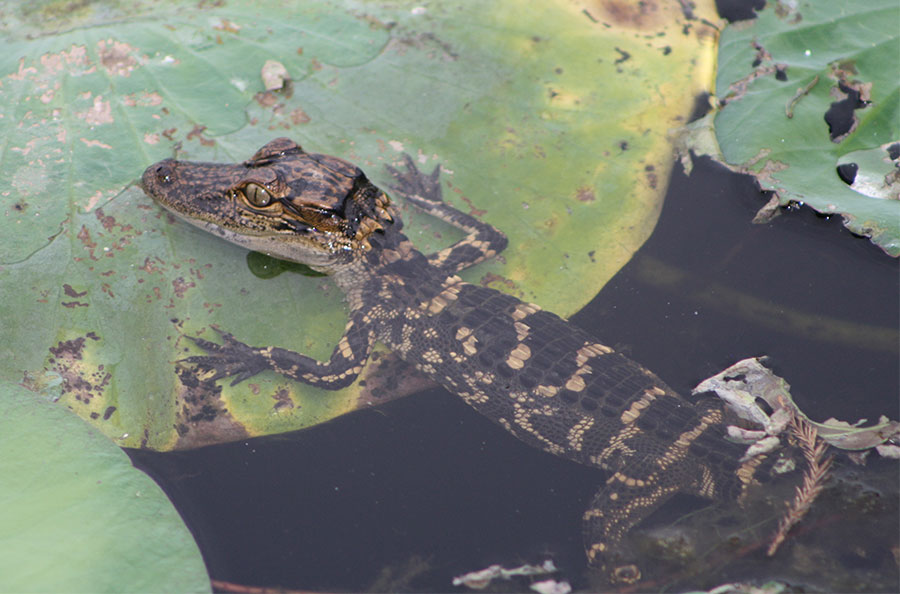 When people and alligators meet

Even though their numbers have increased, alligators are classified as a threatened species. It is illegal to harass or kill them. In fact, the penalty for killing an alligator is a hefty one: a $500 fine and/or 2 to 24 months in jail, plus a replacement cost of $4,313.

Seeing an alligator does not always mean it needs to be removed. Normally, according to wildlife experts, give it time and space and it likely will move on. But, if it is in a place that will cause danger to people, pets or livestock you should call a wildlife officer and let them do the removing.

Cases of alligators in the wrong places at the wrong time often make the news. Two such newsworthy stories in North Carolina include the 12-foot, 672-pound Dare County gator killed when a van hit it in May 2014. The van was damaged but drivable, the people in the van unhurt. It took heavy equipment to remove the dead alligator from the highway.

Another story that made the news happened in Swan Quarter, where a man found an eight-foot long alligator in his garage. He did the right thing and called the NC Wildlife Resources Commission, and they sent an officer to remove it and return it to its natural habitat.

Why it is important to preserve alligators? Like all things in nature, they are part of the circle of life. They are important to the ecosystem of the coastal wet lands. They provide food for other species that eat their eggs and hatchlings. Their habit of digging dens into banks, ponds and lake bottoms provide other animals safe havens. In turn, alligators feed on and control populations of everything from insects to snakes, birds and small mammals.

Remember, if you see a wild alligator, watch and photograph it from a distance of at least 60 feet. Follow the safety rules and leave with a great memory.