Carrying on a Carolina Tradition

Hog killin’ is a family tradition for some, though not for the faint of heart 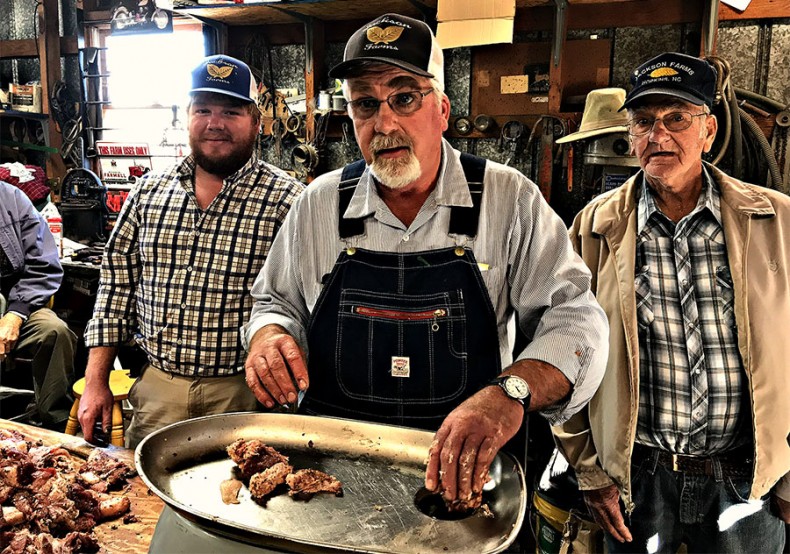 On a cool January morn, as the sun is peeping over the horizon, a posse of community folk, mostly fellows, gathers at Jackson Farms in the rural crossroads community of Hopkins. Pickup trucks are lined up by the fence posts. Smoke is rising from over here and over there — underneath the scalding tub, and the other for warming hands, to be tended until time to render lard later in the day. 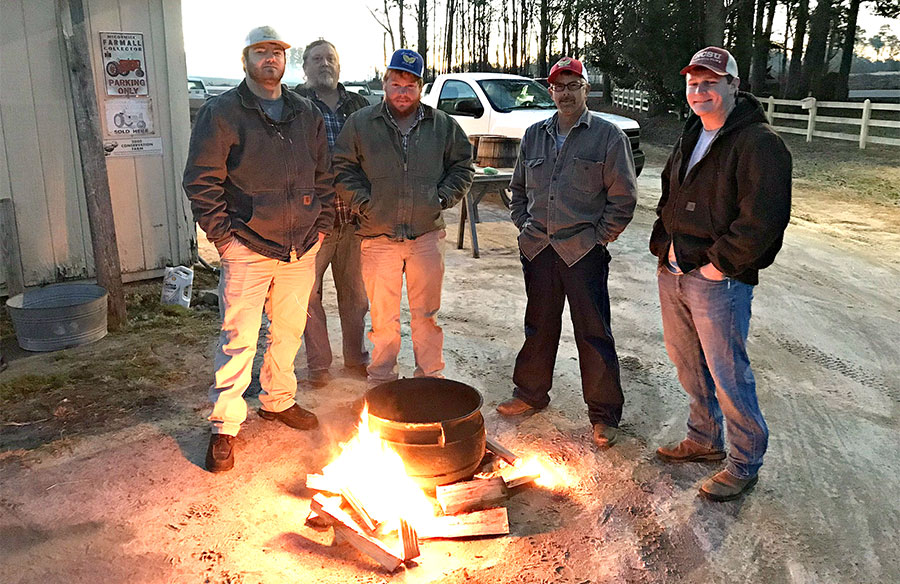 Preparing for the day

The gathering is to help the Jackson family with their annual hog killin’, a nearly bygone ritual of this and most rural communities, which will fill their freezer with pork to feed the family throughout the year.

Terry Jackson, the middleman of the three living generations, is orchestrating the event. Although his son, Caleb, has participated in the past, today he is in his early 20s and “in training” to learn the particulars to carry the tradition into his generation, the sixth, and perhaps beyond. Friends of this country farm boy are there to lend a hand and learn too, wanting to be the torchbearers of this long-standing part of their heritage. For a few in the country, this is still considered a rite of passage. And daddy Terry and granddaddy Donald are happy to share their over 100 years of combined experience with these young men.

Terry’s first memories of this tradition were when he was about 8 years old. He would hang around as the older gents each went about their particular task.

“Mr. Neuman Brannon was the token man to do the ‘gut job.’ When I was about 15, Mr. Neuman cut the end of his finger off with a table saw. When that happened, that became my job from then on,” Terry says. “Back in those days, there would be 50 to 60 hogs killed and processed each winter. They were community events. Families gathered for days of slaughtering and processing to help one another prepare the meat to eat year-round until it was time to do again the next winter.”

They were community events. Families gathered for days of slaughtering and processing to help one another prepare the meat to eat year-round until it was time to do again the next winter.

Caleb’s sister, Rebekah, has actively participated over the years, too, and — according to her mother, Wanda,  embraced it all long before Caleb. As a nostalgic gal, it all warmed my heart to observe.

Typically, feeder pigs — pigs weaned from their mothers — are started on this journey to become food and nourishment to a family in the spring of the year. Caleb fed these pigs for about 10 months. They are usually fed corn, but other things like vegetable scraps are added, too (not to mention the occasional treats of stale cookies and moon pies). By wintertime, when cold air sets in and it is time for killing the hogs, they can weigh as much as 400 pounds.

Things get started once the scalding vat reaches the proper temperature. The hogs are put down, a task on this day taken on by Caleb. (I had mixed emotions about this part, but more on that later.) Once that deed is done, each is hoisted up on a heavy chain by tractor and carried to the vat. Water temperature is monitored to make sure it is just right before the hog is lowered in. Before processing proceeds, the hair must be removed by scalding. Several folks line the vat to rapidly scrape the hair. I was fascinated to see they were using vintage canning jar lids that have scraped many a hog over the years.

Next, I watched as the local tub expert taught Caleb and his friends the art of how to properly “bleed out” and gut the hogs, being careful not to cut too deeply so that the intestines (that become chitterlings) aren’t disturbed.

Knives are sharpened for butchering, and as the day has turned into one a bit warmer than usual for January, speed becomes an important factor to get the hogs processed while the air is still cool. 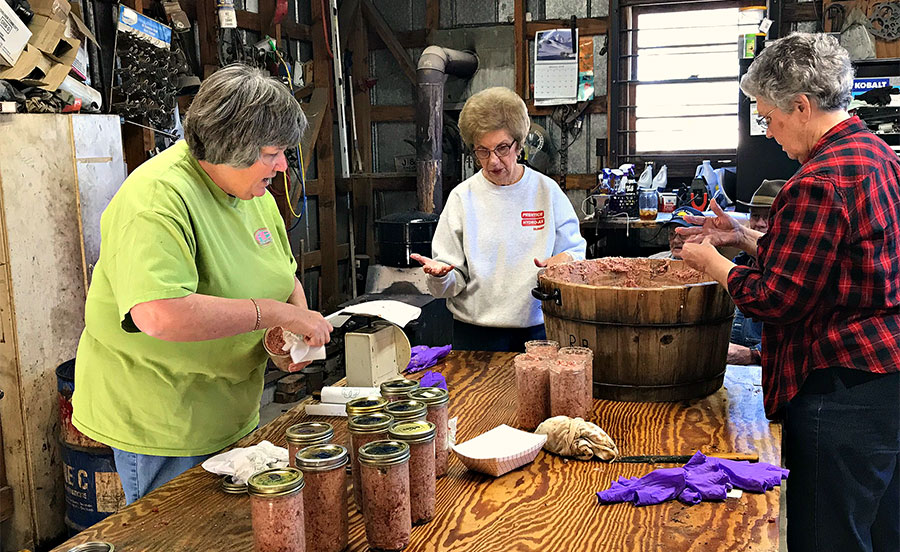 Inside the weathered barn, matriarch Janet Jackson sets a pot of homemade soup on the wood stove for a quick lunch break for all, just before she and her lady friends start trimming the “scrap” meat from butchering to add to the fat. The balance must be “just right” for making sausage.

The grinder is assembled and sausage making commences. Once the 150 pounds or so of meat is ground, it is spread out on a clean sheet of plywood, where former community elder Booger Hopkins’ sausage recipe is prepared. Simply. Just the meat, salt, ground red pepper and sage. In just the right amounts. Terry and community elder Rudolph Bunn gently massage the seasonings into the meat, readying it for piping into casings for link sausage and bulk ground packaging. A cast iron skillet of patties is cooked over the wood fire for sampling to ensure the seasonings are perfect. (And oh were they!)

While this is going on inside by the old wood stove, work is winding down outside. Ribs and loins have been carved and sliced into chops. Middle and side meat (aka bacon) is cut while hams and shoulders are trimmed and readied for the “salt room,” where they will cure for months to enjoy later in the year. The feet are set aside for a special request, bones for making broth are bagged, and everybody knows the brains are Mr. Rudolph’s, which are set aside for his supper. 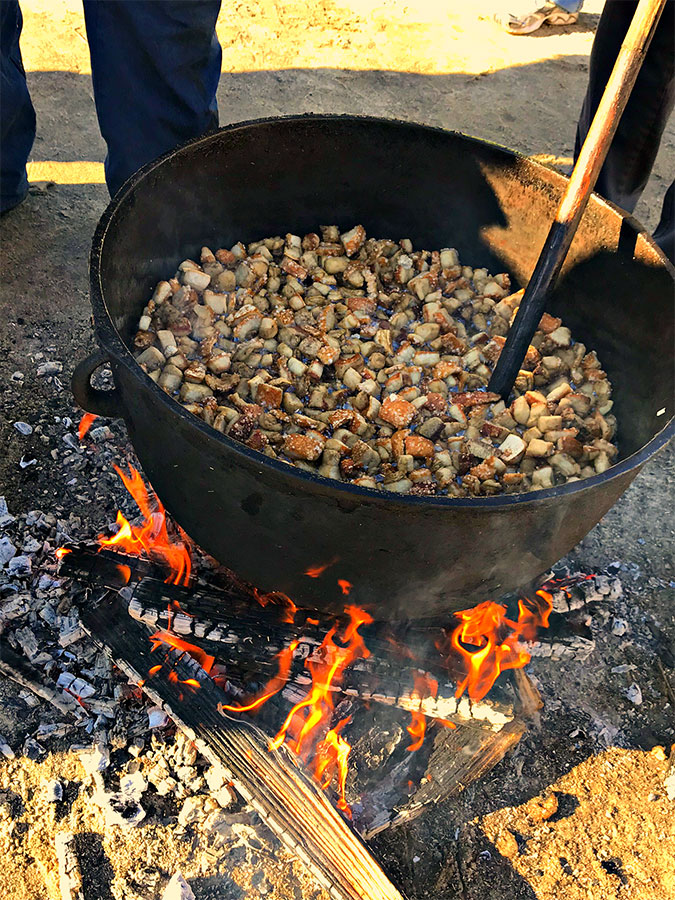 The hand-warming fire now holds a big old iron wash pot, where the remaining fat is being cooked down to render the lard. The pot will soon produce the day’s “candy” reward — crispy cracklings  scooped into a cardboard box to drain and salted for nibbling.

Meat is wrapped, cleanup is happening, and feet and backs are tired. But a day of communal spirit fills the air with the satisfaction of accomplishment. Until next time, the Jackson family freezers and salt house are full again, as is my heart. And my personal worries are gone. Because you see, I grew up in the country and had been around hog killings before, but not the “grown up” part. I confess I was not sure how I would handle the “putting down,” yet wanted to experience the day in its entirety.

As the day drew to an end and I stood amidst those rugged country men, I took a deep breath and silently said a prayer for those hogs; for their lives, and for the nourishment they would provide to many for months to come. Seeing how nary a bit of them was wasted, I was at personal peace.

Back in my pickup truck, barefoot after kicking off my boots, I was especially grateful for the opportunity to be part of this day with my friends and neighbors, as well as for the sausage beside me.

Then I said another prayer that I hope such dying arts just don’t.