Barn quilts connect the history, culture and fabric of communities

Driving the highways and backroads of Western North Carolina, you’re bound to spot one: a “barn quilt.” More than 300 brightly painted squares grace barns, businesses and homes throughout the western part of the state. 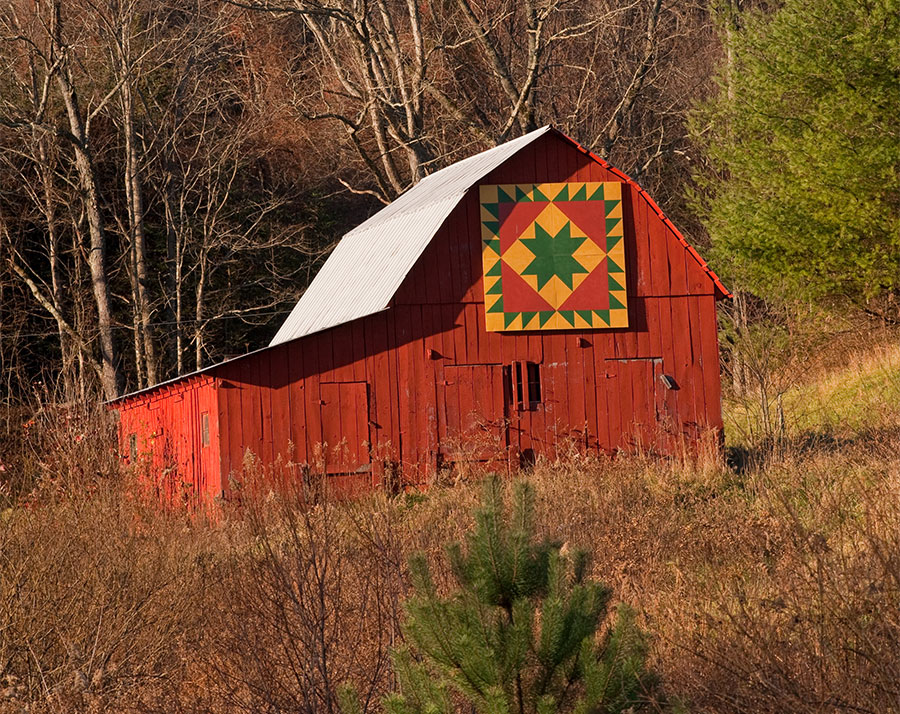 These wooden blocks represent a labor of love, many created by Barbara and Martin Webster starting in 2008. At first concentrated in Yancey and Mitchell counties, barn quilts have spread across the Tar Heel State as others have taken up the cause.

“While they’re pretty to look at, there’s much more to the story of barn quilts here in Western North Carolina,” says Barbara Webster, former executive director of Quilt Trails of Western North Carolina (quilttrailswnc.org). “Barn quilts blend history, culture and community spirit and help tell the stories of the sites where they hang. Each block has been carefully designed or chosen to trigger the story of the family, business or school where it resides. You can learn the history of the area by finding the quilt blocks.”

Barn quilts originated in Adams County, Ohio, when Donna Sue Groves wanted to honor her mother and her Appalachian heritage by hanging a painted quilt on her barn. By 2001, the project morphed into a series of 20 quilts that became a driving tour, drawing visitors to the area, increasing tourism and bringing local heritage to the forefront. 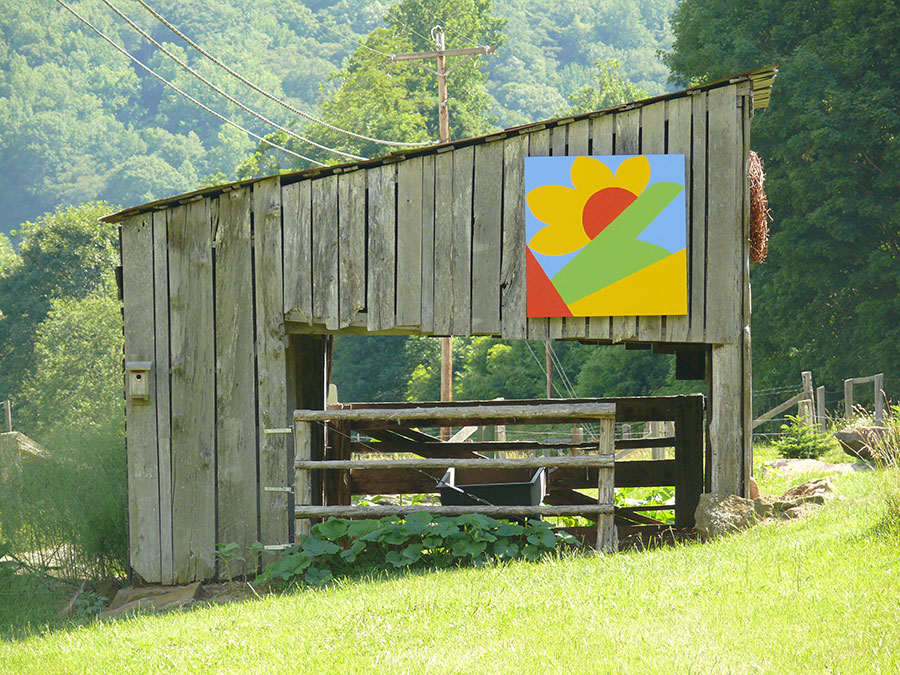 Over the years, other states developed their own quilt trails. By 2008, Toe River Arts Council in Burnsville had received funding from Handmade in America to start a quilt trail, but there was no one to manage it. As a quilter, Barbara spoke up.

“How hard could it be?” she says. “We eventually became an independent nonprofit organization. And we set up some guidelines, such as the designs could contain no words or numbers, they must be translatable to a traditional quilt made of fabric, they couldn’t be used as a company logo or be made from a company logo, and they must portray a connection to history or culture.”

The Websters created a board of directors that researched the optimum materials for long-lasting construction, volunteered to work and to raise additional funds. The group enlisted help from schools, businesses and individuals in the community to bring the project to fruition. 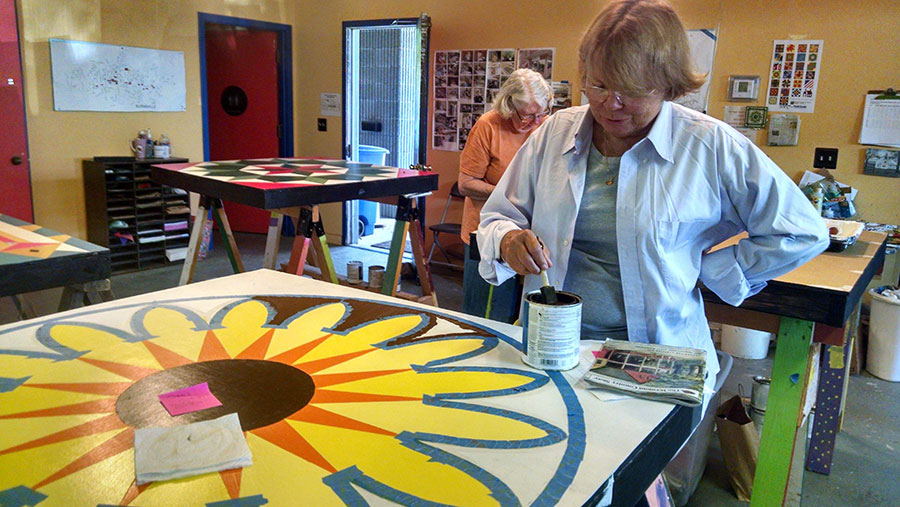 “Students in the Mitchell County High School industrial arts program make the frames and blocks,” says Carole Pearson, who now serves as president of the organization. She and her sister June coordinate the trail and creation of new blocks, many of which are still designed by the Websters, who now live in New Market, Tennessee. Mountain Heritage High School students constructed many of the original blocks.

“Some of the prep work is done by a group for people with developmental disabilities. It gives them a sense of purpose and a place to participate in a community project. They can see the results of their work in the area as more quilt squares are installed,” Barbara explains. “We tried to involve as many in the community as possible, because we wanted the community to feel ownership of the project. After all, the blocks are telling their stories.” 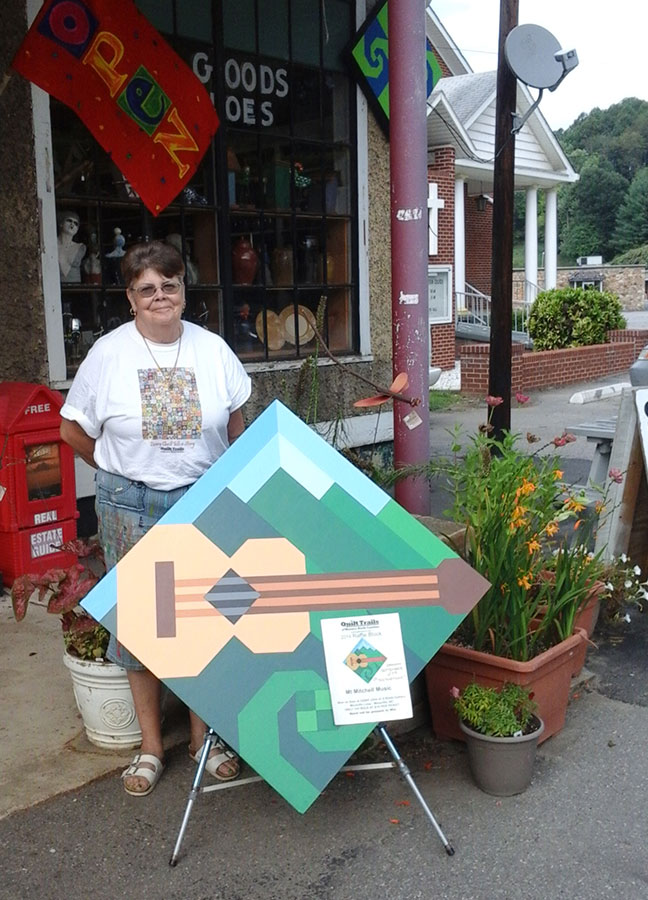 “As the trail grew, we were amazed by what happened,” she says. “People were coming from all over the United States to see our barn quilts. Quilters came by the busload.”

One of the most popular quilt squares is the Sundial, according to Barbara, which hangs on the side of the Yancey County News building in Burnsville and is visible from the town square.

“It’s one of the few exceptions to our ‘no numbers’ guideline, but it is a real showpiece. It’s a working sundial, and it’s very accurate. Bob Hampton suggested it and did the math used to create it,” Barbara says. “Teachers take their students on field trips to teach them how to read a sundial.”

Quilt Trails of Western North Carolina has developed 10 itineraries for self-guided tours. Booklets detailing the tours are available at One-of-a-Kind Gallery in Micaville (ooakartgallery.com), which serves as the home base for the organization, operating a gift shop with books, maps, T-shirts and other trail mementos.

Now, more than 300 quilt squares make up the Quilt Trails of Western North Carolina, mostly in Yancey, Mitchell and Haywood counties and the surrounding areas. 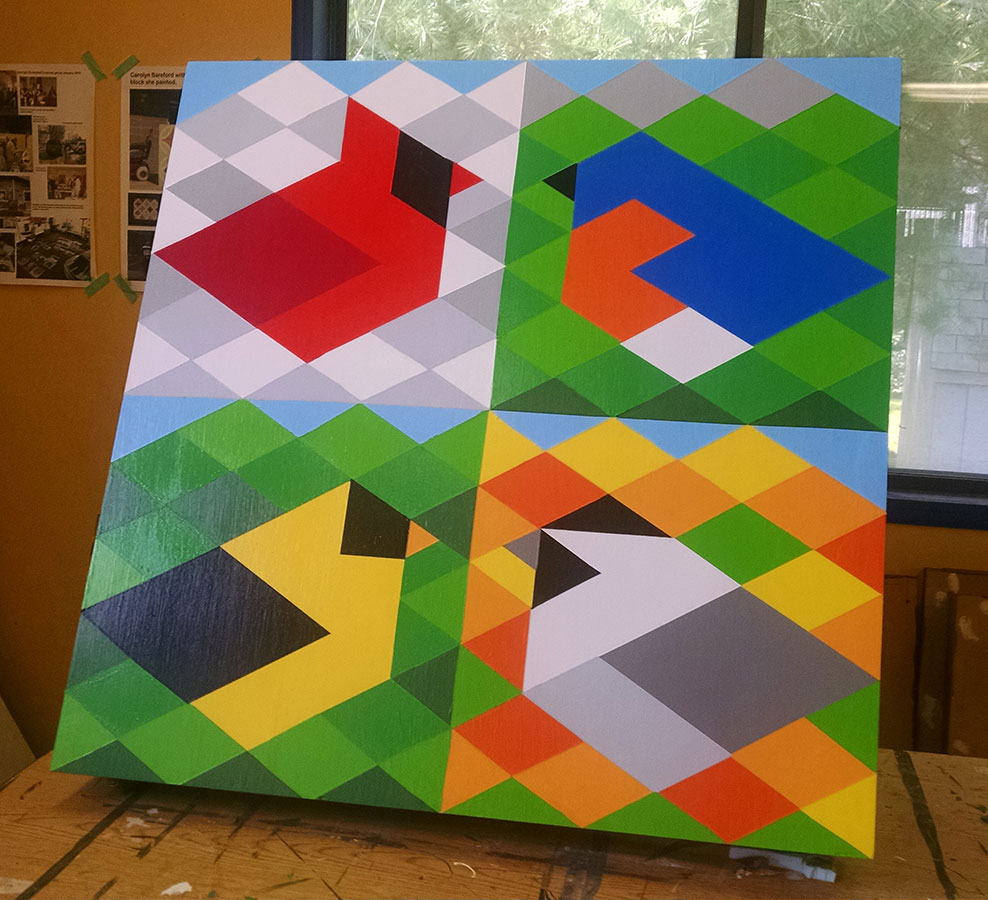 Ashe County has developed six drivable trails to showcase its own quilt trail (ashecountyarts.org), many of which were created by Syndi and Renee Brooks. The pair teach barn quilt-making and sell barn quilt supplies at their West Jefferson studio, Two Quilt Girls (ilovebarnquilts.com).

“We were so impressed with the quilt squares we saw in Hendersonville several years ago that we decided to make one for ourselves,” Syndi says. “It really caught on and over the years, so many people have wanted them. Renee and I have probably created nearly 3,000 in the United States since 2011. About one-third of them are in North Carolina.”

“Barn quilts can have such interesting stories,” she adds. “They’re a special reflection of history and women’s work. They’re sort of like magic that can transport you down memory lane or evoke a sense of well-being. People really love them.”

Colorful barn quilts can be found throughout North Carolina and nationwide. Here are a few resources to help find them:

This quilt trail is an ongoing project with its beginning in downtown Hayesville, where the first barn quilt, the Triple Sunflower, was installed in 2017.

What began as an idea in 2015 now amounts to quilt blocks adorning barns, sheds and businesses across Person County.

This trail features dozens of quilt blocks — keep an eye out for bees, flowers and cows hidden in some. A “Trail Gallery” link lists installations on a map.

Follow a map to spot 50 colorful quilts on barns and businesses throughout Yadkin County.

Going on a road trip? Search by state and county to find barn quilts along your route.