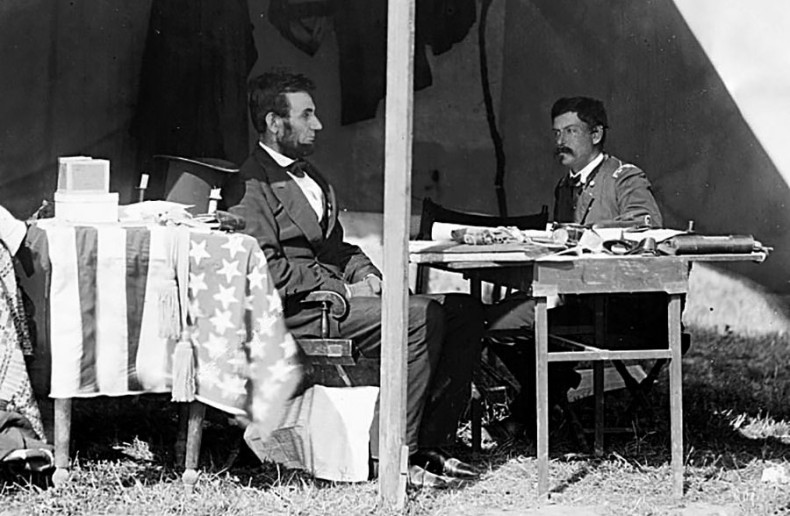 In 1899, less than 35 years after Lincoln's assassination, James H. Cathey of Sylva wrote and published the third edition of a book, entitled "The Genesis of Lincoln," in which he endeavors to prove "an interesting fact in the story of America's most remarkable man."

Quoting interviews and letters from widely scattered sources, Cathey makes a case that Lincoln's mother, Nancy Hanks, became pregnant as a servant girl in the home of Abraham Enloe, located on Ocona Lufta, about 14 miles from Bryson City in what is now Swain County. 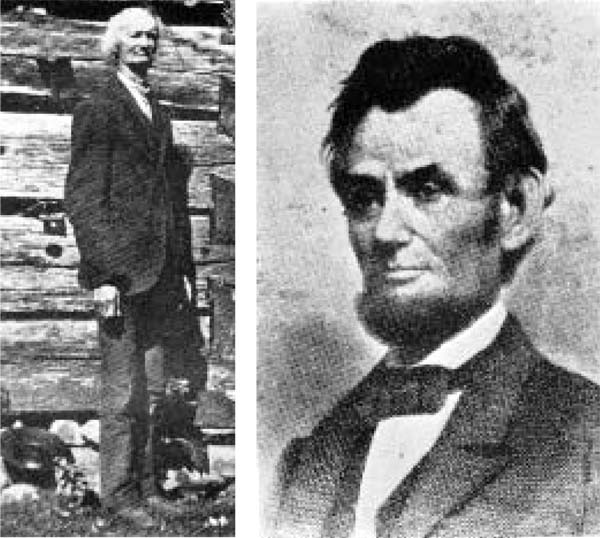 James Cathey’s book includes these photographs on facing pages. Lincoln’s alleged half-brother, Wesley Enloe, was 81 in the photo on the left. His figure bears a striking resemblance to Lincoln, shown when he was President. The photos are from the fourth edition of James Cathey’s book, “The Genesis of Lincoln,” published in 1939 by B.H. Cathey, Canton, N.C. They are reproduced here courtesy of William Enloe, of Edneyville.

Abraham Enloe fathered nine sons and seven daughters by his wife (a former Miss Egerton). The ninth and only surviving son in 1899 was Wesley M. Enloe. Wesley was 88 years old when he was interviewed by Cathey at the Enloe home — the same house on the same farm where his father and mother lived when Nancy Hanks was banished from the household and sent to Kentucky.

Wesley Enloe said in 1899: "I was born after the incident between father and Nancy Hanks. I have, however, a vivid recollection of hearing the name Nancy Hanks frequently mentioned when I was a boy. No, I never heard my father mention it; he was always silent on the subject so far as I know.. . . I have no doubt that the cause of my father's sending her to Kentucky is the one generally alleged."

Cathey interviewed Joseph A. Collins, then 56 and living in Clyde in Haywood County. Collins said he met a Judge Gilmore in 1867, who said he knew Nancy Hanks before she was married, and that she then had a child she called Abraham. "While the child was yet small," Collins quoted Judge Gilmore, "she married a man by the name of Lincoln, after which the boy was known as Abraham Lincoln."

"Years ago," Collins quoted Judge Gilmore, "on Turkey Creek in Buncombe County, N.C., I met an old gentleman whose name was Phillis Wells. Wells said he was then 90 years old. When he was a young man he traveled over the country selling tinware and buying furs, feathers and ginseng. On one occasion he called on Abraham Enloe to stay overnight, as was his custom."

Enloe went with Wells to the barn to put up the peddler's horse, Judge Gilmore said. While there, Enloe told Wells: "My wife is mad; about to tear up the place; she has not spoken to me in two weeks, and I wanted to tell you about it before you went in the house."

Wells asked, "What is the matter?" And Abraham Enloe replied, "The trouble is about Nancy Hanks, a hired girl we have living with us."

"Later a child was born to Nancy Hanks and she named him Abraham."

As Cathey reports it, Wells said he returned to the Enloe place some time later and by that time Abraham Enloe had sent Nancy Hanks to Jonathan's Creek and hired a family there to take care of her, and that later a child was born to Nancy Hanks and she named him Abraham.

An Asheville lawyer named Col. Davidson, who married into the Enloe family, and who settled Abraham Enloe's estate, related that shortly after the Civil War a man came to his office and introduced himself as a son of Nancy Enloe Thompson. The Thompson man stated that he was a Democrat and had been an Indian agent during Lincoln's administration.

"I asked," Col. Davidson said, "why Lincoln, who was a Republican, appointed a Democrat an Indian agent. Thompson replied that the President was under some great obligation to his [Thompson's] mother, and had expressed a desire to aid her in some substantial way. 'This is the way I got my appointment,' he told me."

Capt. James W. Terrell (born in Rutherford County in December 1829) recalled a conversation with a Dr. Egerton of Hendersonville, a relative of Mrs. Abraham Enloe. Dr. Egerton told him, Terrell said, that in the fall of 1860, just before the Presidential election, he had a guest in his home, a Mr. Davis, also a Rutherford County native, who had moved to Illinois in the early 1850s and had become "intimately acquainted with Abraham Lincoln."

"In a private and confidential talk," Davis is quoted as saying, Lincoln told him he was of Southern extraction, that his right name was, or ought to have been, Enloe, but that he had always gone by the name of his stepfather.

After reading Cathey's book, I picked up the Hendersonville phone book and called the first three Enloes listed. "The story is common knowledge in the family," Bryce Enloe of Edneyville told me. "I come from the same set of Enloes."

"I heard it from my grandparents," said Keith Enloe of Laurel Park. "It has been passed down from generation to generation."

"Abraham Enloe was my great-great grandfather," said Robert Enloe of Big Willow community. "I've heard the story all my life. I know it is true."

Was Abraham Lincoln the son of a western North Carolina farmer? You be the judge.

Charles Joyner is a Carolina Country correspondent living in Hendersonville.