North Carolina Is A Catfish Paradise

These homely-looking fish are easy and fun to catch, and they taste so good 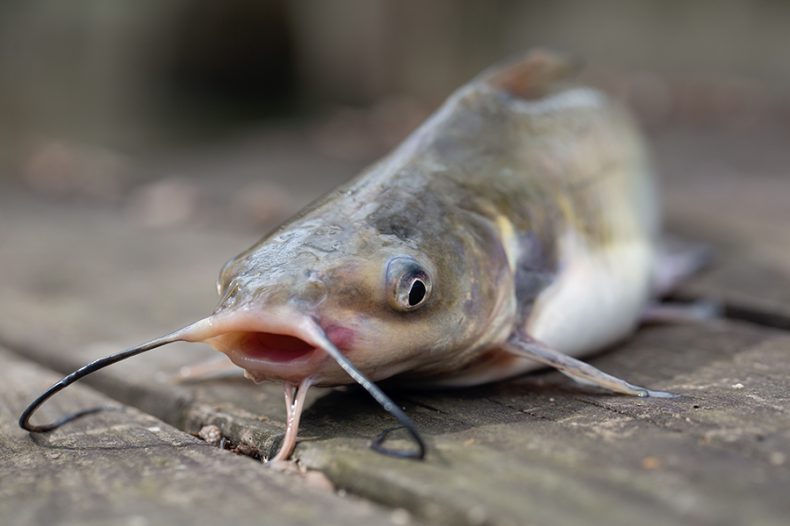 Sometimes the best way to stay unnoticed is to go along quietly, minding your own business—right in front of everybody. Which is the tactic used by some of North Carolina's biggest, tastiest fish that hug the bottom of rivers and reservoirs and thereby stay largely under the radar. If more anglers knew what delicious creatures lurk in the depths of North Carolina's waters there might be a run on fishing tackle at sporting goods stores.

The creature I am referring to is the catfish. Despite an ability to grow to huge sizes and a willingness to chomp many different kinds of bait, cats are accorded respect by too few anglers. Sure, catching a 3-pound largemouth bass or rainbow trout is fun—but catching a 30-pound catfish is even more fun. And on Lake Norman, Lake Waccamaw or wherever in the Tar Heel State, catching a 30-pound monster isn't all that difficult. Furthermore, for every huge catfish that swims in North Carolina waters, many smaller cats are an ideal size as the main ingredient for a fish fry (try our recipes for Oven Fried Catfish or Marinated Catfish).

Catfish (order Siluriformes) are named for their prominently displayed "barbels"—slender, whiskerlike sensory organs located on the head. They swim in freshwater environments of many kinds, with species found on every continent except Antarctica. Catfish have no scales but do possess a strong, hollow ray in their dorsal and pectoral fins, through which a stinging protein can be delivered when the fish is irritated (which happens whenever they're caught!).

Channel catfish resemble their larger cousins the blue catfish. Both have forked tails. However, channels have scattered black spots along their back and sides. Larger channels over time lose the black spots and take on a blue-black coloration on the back, which shades to white on the belly. The maximum size is about 45 pounds (the world record is 58 pounds, 11 ounces, caught in the Santee-Cooper Reservoir, S.C., in 1964). The fish average 3 to 4 pounds.

Catfish eat aquatic insects, crayfish, larvae, small fish, crustaceans, frogs, freshwater mollusks, and even seeds carried in the water. Contrary to popular belief, carrion is not their usual food. Catfish feed primarily at night using sensory buds located in the sensitive barbels and throughout the skin to locate prey. Although they normally feed on the bottom, catfish also will occasionally feed on the surface and at mid-depth.

Although trolling minnow-imitation lures can attract catfish, more than 99 percent of them are taken on dead or live bait. Chicken livers and gizzards, shrimp, nightcrawlers, red worms, fish belly strips and stink baits are all used as catfish bait, which most anglers send straight to the bottom. But if the bottom is super-weedy, a float can be used to suspend an offering.

If you're boat fishing, anchor above a known catfish hotspot (inquire at local bait shops). Catfish frequently congregate around underwater mounds. Cast and retrieve slowly. Your rod tip will bend as you drag your sinker up the side of a mound. When the rod tip straightens, you are, more than likely, on the ridge of a mound. Prepare for a strike as you slowly work your bait down the side. Keep in mind: catfish are slow eaters, so be patient before setting your hook.

You don't need a boat to enjoy catfishing. On North Carolina lakes and streams, most anglers fish from shore. Here are some tips: 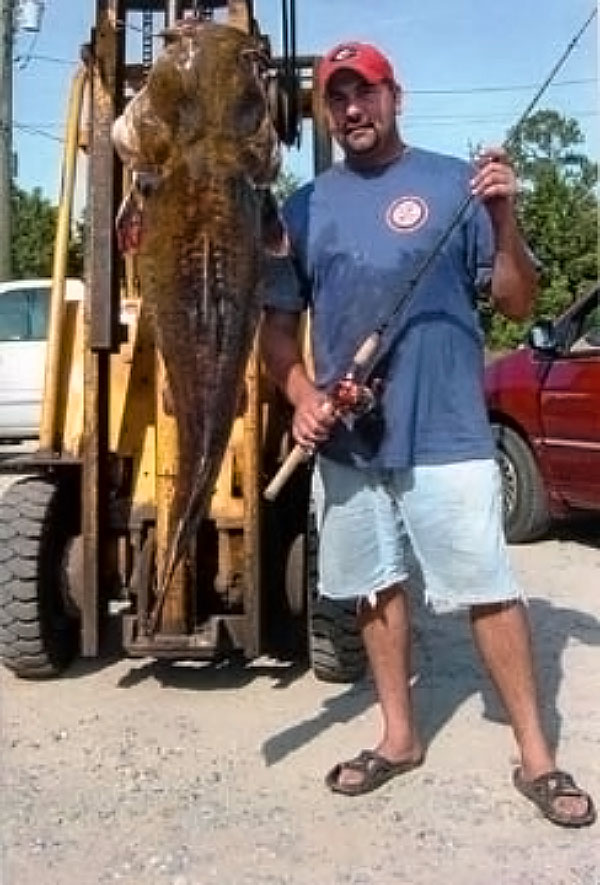 Channel catfish are found in most North Carolina rivers and lakes. While not much to look at, they always put up a good fight and make for delicious eating. Most weigh in the 10- to 15-pound class.

Where to catfish in North Carolina

The range of catfish locales spans the entire state: ponds, lakes, watersheds, rivers and creeks that have suitable habitat.

Much Tar Heel catfishing today is done in large bodies of water. North Carolina reservoirs have sizable populations of channel, blue and flathead catfish. But these creatures are stream fish by nature. They've adapted to reservoir environments, but they originally lived in moving streams. (That's why they're called "channel cats.") Catching catfish in streams is a North Carolina family tradition that predates construction of dams and reservoirs.

Prime rivers to pursue catfish include the Cape Fear, Roanoke, Tar, Neuse and Yadkin. Bullheads, blues and channels are found in abundance in all these streams.

If you prefer lake fishing, head for Lake Norman, the state's largest impoundment. It harbors several species of catfish, particularly huge blues. The rod-and-reel state-record blue catfish is a 98-pound specimen. The ideal baits for blue catfish are cut shad and live sunfish.

Flatheads are perhaps the ugliest members of the catfish family. But when it comes to tasty fillets, flatheads are tops on the table. The homely critters inhabit many of the state's rivers, creeks and lakes, and can be caught on a variety of baits.

Some words of warning are needed for flatheads. Anglers love the flathead catfish because it's big, puts up a good fight and tastes good. But the flathead is unique among American catfish in that it must eat living fishes or other living invertebrates, including crabs and crayfish. It won't eat plants or any dead material, and you can't catch flatheads with popular catfish baits such as nightcrawlers or chicken liver. The creature's fondness for live food has fisheries officials worried about some native North Carolina fish species, including the redbreast sunfish, white catfish and bullhead species, which have all seen a population decline in areas where flatheads have been introduced.

Flathead catfish are not native to North Carolina; the species was introduced to the state in the mid-1960s as a sport fish. Little did North Carolina officials know then that the flathead would put its carnivorous traits to use in harmful ways. To help control flathead population in the state, anglers can catch-keep-and-eat when they haul in a flathead catfish.

Mary Syrett is a native North Carolina angler who lives in Cary.