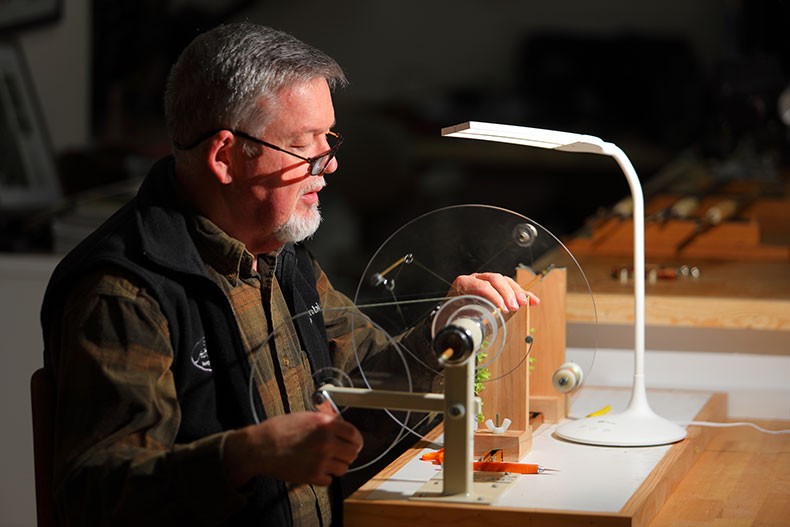 John wraps the silk thread on the guides for the rod.

Qualifying for membership in the Southern Highland Craft Guild isn’t easy. Nor is earning certification as a Fly Fishing Instructor. John Hollifield of Sapphire, in Transylvania County, has developed the skills for both. 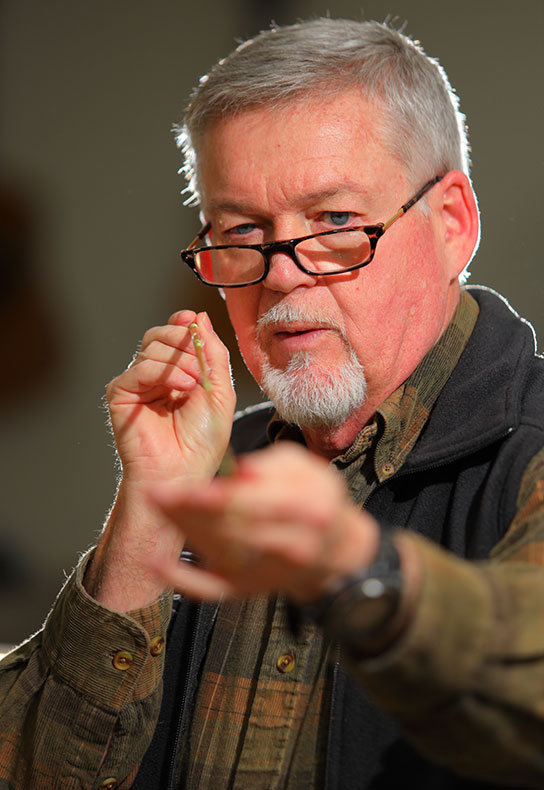 John’s dad taught him to love fishing when he was about 6 years old. By age 8, he was tying his own flies.

“I enjoy using things I make myself and making things for other people,” he says.

That enjoyment and aptitude for using tools led John to starting making graphite fishing rods in 1980. In 2011, he began making rods from bamboo.

But not just any bamboo. The kind that has both the strength and flexibility needed for fly fishing rods is called Tonkin Cane. It grows only in southeast China.

John starts by cutting a 12-foot-long bamboo cane into a rod-length piece, then into appropriate section lengths. He cuts these round sections into six parts, each at a 60-degree angle, and glues them together.

Later, the guides that hold the fishing line on are secured with pure silk. John applies spar, a marine varnish that resists UV light and moisture, to the entire rod.

Then the metal parts — the rod seating and the ferrules that hold the rod’s sections together are glued on. Between every step, John sands and polishes the rod smooth.

The most challenging parts of creating a fine bamboo fly rod are “making sure the ferrules fit properly and getting the tapering so the action of the rod is what you’re looking for,” John explains. The ferrules must release easily when the rod is taken apart for storage or travel. But if they don’t fit snugly, the rod will shake.

“You can have a beautiful blank [the rod’s shaft], but a rod with a poor ferrule is a bad rod,” John says.

When customers spend $2,400 to $6,700 for one of John’s fly rods, they usually want to personalize it. That’s why he mastered engraving.

The metal parts of the rod, such as the ferrules, are made of nickel silver. John engraves on them whatever designs customers want — names, initials, company logos. Animals are frequently requested.

“I’ve engraved everything from a buffalo to a French breed of dog used to find mushrooms. Trout, mayflies, grizzly bear, golden retrievers, an Arabian horse, even a kudo, which is an African antelope,” he recalls.

To add these custom details, John peers through a 30-power stereo microscope. He uses a handheld pneumatic engraver’s tool to chisel away excess metal within the design. 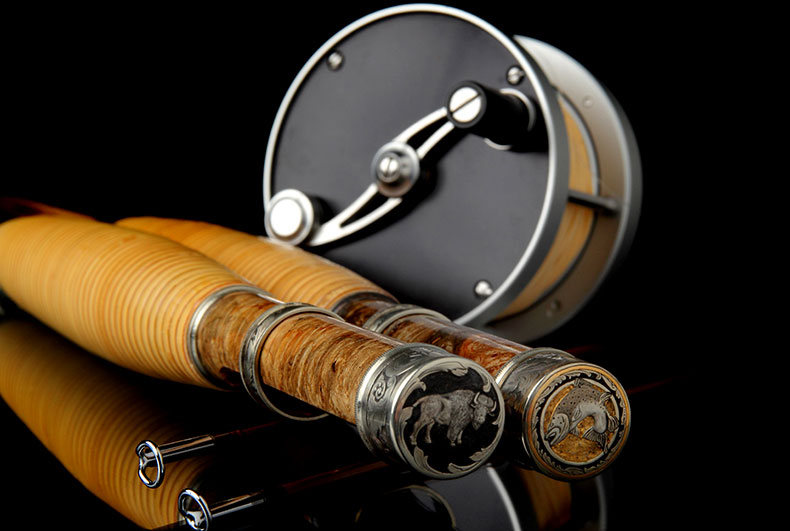 John also teaches people to make bamboo rods and to fly cast. It took him about a year to earn a fly fishing instructor’s certificate from Fly Fishers International.

John has fished Idaho’s Snake River and other iconic fly fishing locations in Western states. But as for his favorite spots?

“Anywhere in the mountains [of North Carolina], from the Tennessee line back to Asheville.”